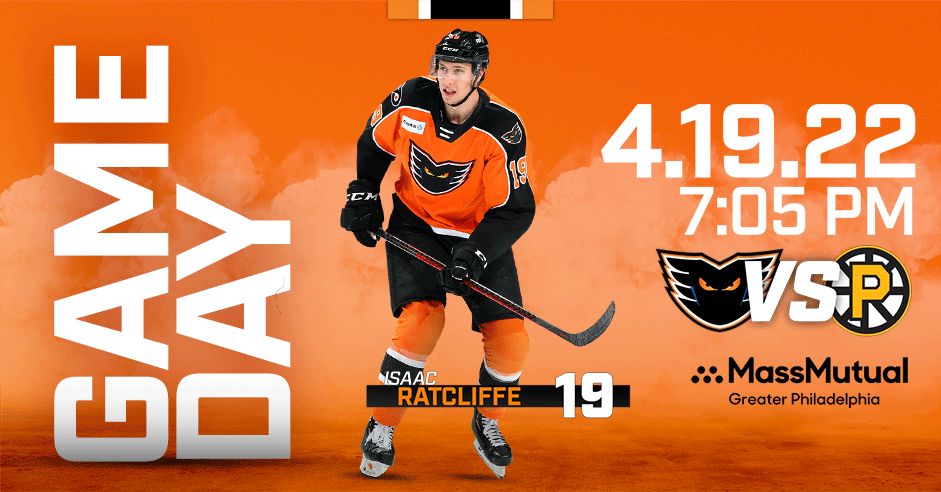 It’s a Phantoms GAMEDAY presented by MassMutual as the Lehigh Valley Phantoms play at the Providence Bruins in the concluding game of a home-and-home series for the Phantoms against Providence.
Lehigh Valley (27-30-13) is playing game 71 of the season and there are 6 games remaining including tonight with six of those games in Allentown.

LAST TIME
Wade Allison (10th) tied the game early in the third period but his bid to give the Phantoms the lead was waved off due to goaltender interference. Providence eventually won in a shootout 3-2 as the Phantoms secured one standings point for the second game in a row in extending their home-ice point streak to eight games (6-0-2).
Lehigh Valley had a power play in overtime with a chance to win it but the Bruins’ penalty kill held strong as the Phantoms finished 1-for-7 on the man advantage. Pat Nagle made 30 saves on 32 shots. Cal O’Reilly scored his team-leading 20th goal of the season.

GETTING A LOOK WITH THE BIG CLUB
Goalie Felix Sandstrom has been recalled again to the Philadelphia Flyers after returning to the Phantoms for one game on Friday. Defenseman Egor Zamula has played in the last three games for Philadelphia.

PROVIDENCE BRUINS
Providence (35-20-10) has moved into first place in the topsy-turvy Atlantic after some inconsistent play in March and April. Troy Grosenick is the top goalie in the AHL with a 2.02 goals-against average and .931 save percentage along with his 16-5-4 record but has been recalled to Boston. Newcomer Brandon Bussi was AHL Player of the Week after winning back-to-back games at Lehigh Valley and Hershey in his pro debut weekend. He pulled off a 1-0 win on Sunday in Chocolatetown. Providence has defeated the Phantoms in a pair of games this past week, both by only one goal.
The Phantoms are 1-3-1 against the Bruins. Leading scorer Cameron Hughes (14-31-45) left Monday’s game against the Phantoms with an injury and did not play last weekend. Providence allows just 2.6 goals per game which is best in the conference. The Bruins’ 84.3% penalty kill is second-best in the conference and pushed the team to a shootout win at PPL Center on Saturday holding the Phantoms to 1-for-7 on the power play.

PHANTASTIC!
– Cal O’Reilly has 533 career assists in the AHL which is tied for 8th all-time with former Philadelphia Phantoms great Peter White who is the all-time leading scorer in franchise history. White had 472 of his points and 319 assists as a member of the Phantoms.
– The Phantoms are on an eight-game home-ice point streak (6-0-2) since March 11.
– The Phantoms now have six players who have reached double digits in goals after Maksim Sushko and Wade Allison both scored their 10th of the year last week. They join Cal O’Reilly (20), Hayden Hodgson (19), Garrett Wilson (16) and Max Willman (10) in the select group.
– The Phantoms are 16-1-1 when scoring four or more goals. The Phantoms are 16-2-3 when leading at the second intermission.
– Five Phantoms players have made their NHL debuts this season: Max Willman, Felix Sandstrom, Linus Sandin, Isaac Ratcliffe, Hayden Hodgson
– The Phantoms have played 70 games and have 6 remaining in the 2021-22 regular season.