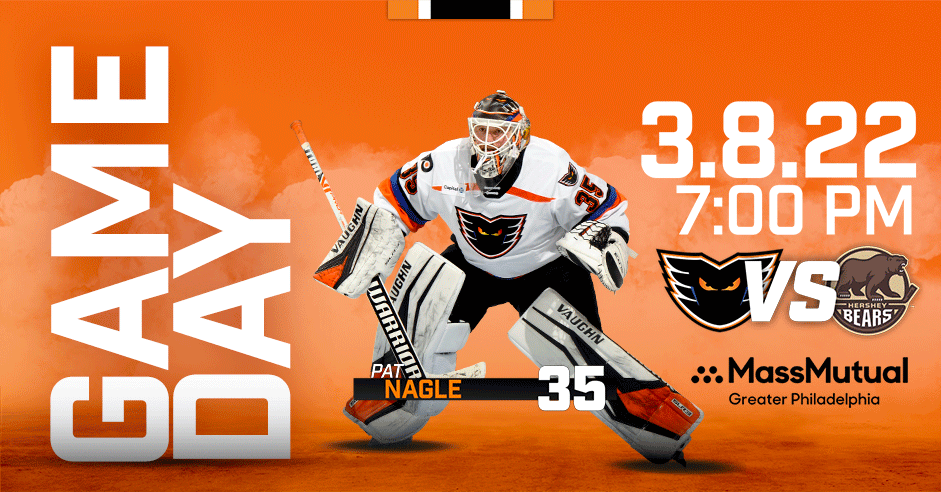 TONIGHT
It’s a GAMEDAY presented by MassMutual as the Phantoms travel to Chocolatetown to take on the rival Hershey Bears.
Lehigh Valley (18-23-10) is striving to get back into the W column. Hershey (26-21-7) has dropped four straight. The Phantoms are 5-1-1 against the Bears this season.
Tonight’s contest was previously slated for December 22 but was postponed at the time due to COVID-19 protocols.

LAST TIME
Cal O’Reilly (13th) and Morgan Frost (6th) scored for the Phantoms in the third period but the visiting Charlotte Checkers held off the late rally effort in a 5-2 final. Lehigh Valley out shot Charlotte 35-19  but the Checkers made the most of their chances. Pat Nagle took the loss and was relieved in the second period by Felix Sandstrom. Florida first-rounder Owen Tippett had a goal and an assist for the Checkers and Joey Daccord picked up the win.

SCARY INJURY
Jackson Cates left the game on a stretcher after a violent collision into the endboards on Saturday. Head coach Ian Laperriere reports that all tests came back normal and Jackson has since been discharged from the hospital.

WADE RETURNS
High-energy winger Wade Allison has been activated from injured reserve in Philadelphia and loaned to the Lehigh Valley Phantoms. The second-rounder out of Western Michigan University has played just seven games with the Phantoms and one game with the Flyers in a season with limited action due to three different injuries. Allison has three goals and one assist in his seven games with the Phantoms that al came in December and January.

TRANSACTIONS
Goalie Kirill Ustimenko has been reassigned to the Reading Royals of the ECHL.
Defenseman Ryan MacKinnon has been recalled by the Phantoms from Reading.

SUSPENDED
Forward Hayden Hodgson has been suspended for three games as a result of an elbowing incident in Wednesday’s game against Providence. Tonight’s game at Hershey is the third, and last, of his suspension. He is eligble to return to the lineup on Friday at home.

HERSHEY BEARS
Hershey lost on Sunday at Hartford 3-1 to run their winless streak to four as Scott Allen’s crew have slipped to fifth place in the Atlantic. Leading scorer Joe Snively (15-23-38) has thrived with Washington and is still up with the Caps. Axel Johnsson-Fjallby has also been recently recalled. Phantoms’ alum Mike Vecchione is the Bears’ active scoring leader with 12-14-36.
Cal O’Reilly has scored five of his 13 goals this season against Hershey including three shorthanded goals.
Lehigh Valley also has upcoming visits to Hershey on Sunday, March 13 and Wednesday, March 22.
The Phantoms won a pair of matchups against Hershey on February 11 and February 13 at PPL Center 6-3 and 3-2 with Felix Sandstrom posting both wins. On February 11, Lehigh Valley set a team record with only 14 shots on goal but racked up five goals against Zach Fucale in the 6-3 win.
Hershey is 2/25 on the power play against the Phantoms while Lehigh Valley has gone just 3/24 in the season series.

News and Notes
– Cal O’Reilly has played in 992 professional games including the AHL, NHL and KHL. He is projected to reach his 1,000th pro game on March 25 at Laval. On March 4, he became the 41st player to reach 800 AHL games.
– The Phantoms have played 51 games and have 24 remaining with less than two months to go in the 2021-22 regular season.
– Matt Strome has three goals in his last three games. All five of his goals this season have come since January 23.
– Hayden Hodgson leads the Phantoms with 16 goals and has four goals in the last seven games as well as 10 goals in the last 18 games.
– The Phantoms are fourth in the league with 14 total OT games. Cleveland has 17 following by Hershey and Wilkes-Barre/Scranton with 15 apiece.