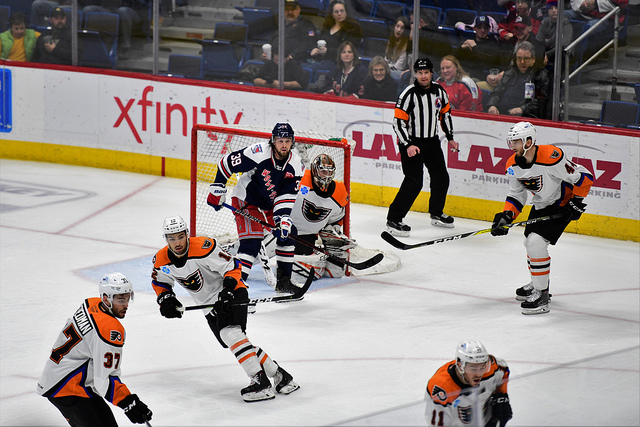 Hartford, Conn. – Former Phantoms goalie Dustin Tokarski took Round 2. In a 30-save performance, the Hartford backstop carried the Wolf Pack to a 3-1 victory on Saturday night at XL Center while also personally bouncing back from a humbling performance dating back to the last time he faced his ex-teammates; On October 24 Tokarski allowed three goals in the first five minutes against the Phantoms and was removed from the game.

Tokarski was tested most in the first period when he made 15 saves on 16 shots including several of his best stops on the night. Only Nicolas Aube-Kubel (10th) was able to beat him on the back-door following a rebound of a point-blank opportunity by Mike Vecchione for a goal that was also assisted by Philippe Myers late in the first period.

Branden Komm of the Phantoms made his AHL debut at 27 years old with a 25-save performance that kept his team in the game and provided a chance for a comeback. Komm made a handful of sparkling point-blank saves in the second and third periods to prevent the deficit from increasing.

Hartford’s Matt Beleskey (4th) opened the scoring on a backhand chip on a rush into the zone at 5:07 to give the Wolf Pack the initial advantage.

Aube-Kubel’s goal at 17:52 of the first pulled the Phantoms back to even at 1-1. The Wolf Pack were perhaps fortunate to not be trailing at the first intermission after Lehigh Valley bombed Tokarski for a 16-5 shots advantage.

But the second period was stronger for Hartford who took the shot-count 14-5 while Peter Holland’s (12th) wrister from the top of the left circle just did glance off the glove of Komm for a 2-1 lead at 6:00 in the middle frame.

The second period also featured a couple big stops right on the doorstep for Komm all the way to the final minute of the frame when he robbed Vinni Lettieri on the doorstep with under a minute to go. In the meantime, the Phantoms certainly had more chances than their low shot-count would suggest. Taylor Leier had a couple nice opportunities that missed the net when he was trying to pick a corner. And Greg Carey from the left circle aimed for the short-side on Tokarski’s blocker but missed it past the left post.

Cole Schneider’s tip-in from the left of the cage at 2:39 into the third off the rebound of a center-point blast pushed the Hartford advantage to 3-1. Lehigh Valley couldn’t break past Tokarski in their comeback efforts.

Lehigh Valley out shot the Wolf Pack in the game 31-30. Both teams were 0-for- on the power play in the relatively hard but also infraction-free contest. The season series between the Phantoms and Wolf Pack is even at 1-1.

The Lehigh Valley Phantoms road-trip concludes on Sunday afternoon at the Springfield Thunderbirds with a 3:00 p.m. opening face-off. Catch the game on 790-WAEB and the Phantoms 365 app.

The Phantoms return home on Friday, January 11 and Saturday ,January 12 hosting the Binghamton Devils and Hershey Bears on consecutive nights.