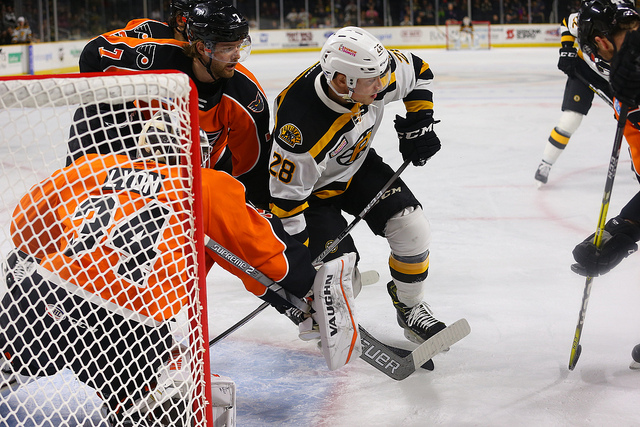 Conner and Vorobyev Score in 4-2 Setback at Providence

Providence, R.I. – The Providence Bruins took advantage of a quick scoring spurt at the end of the first period and hung on from there in a 4-2 victory over the Lehigh Valley Phantoms on Friday night at Dunkin’ Donuts Center in Providence in the first game of 2019 for both teams.

The Phantoms trailed 3-0 after one when the Bruins scored thrice in a span of just 1:18 to break open what had been a 0-0 tie. 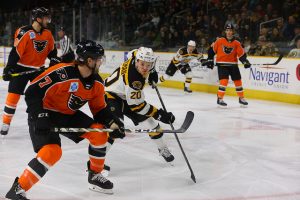 Lehigh Valley rallied in the second period with a pair of goals on only two shots. Chris Conner (11th) put the Phantoms on the board with his unassisted breakaway. And Misha Vorobyev (4th) found the back of the net on a pass attempt that banked off a Bruins defenseman’s leg.

Gemel Smith (2nd, 3rd) led the Bruins attack with a pair of goals which he scored just 21 seconds apart in the opening frame. Trent Frederic (7th) had opened the scoring less than a minute earlier. Joona Koppanen (2nd) deflected a point-shot just 3:30 into the third to open the lead back up to 4-2. Goalie Zane McIntyre held off the Phantoms the rest of the way.

Lehigh Valley (19-11-3) continues their stronghold on third place in the Atlantic Division and took a rare road loss slipping to 10-4-2 away from PPL Center. The Bruins evened the season series with the Phantoms at 2-2 with just two more meetings remaining between the two foes. 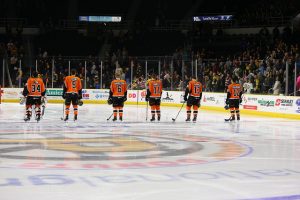 Alex Lyon repelled 30 out of 34 Bruins’ drives. Providence out shot the Phantoms 34-20. The Bruins scored a power-play goal in the first period representing the first time the Phantoms had allowed a man-advantage marker on the road since November 17th at Springfield in a streak of 25 consecutive away kills.

Lehigh Valley’s roadie through New England continues Saturday night at the Hartford Wolf Pack with broadcast coverage on 790-WAEB and the Phantoms 365 app. The Phantoms then play at the Springfield Thunderbirds on Sunday afternoon at 3:00 p.m.

The Lehigh Valley Phantoms play their first home games of 2019 on Friday, January 11th and Saturday, January 12th against the Binghamton Devils and Hershey Bears.