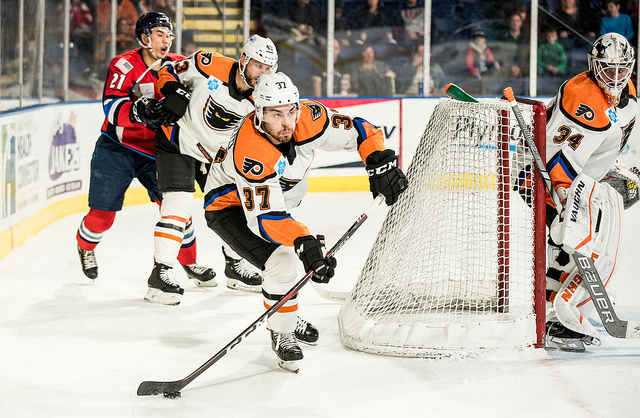 Springfield, Mass. – Defenseman Mark Friedman snapped through an overtime winning goal to push the Lehigh Valley Phantoms to a 4-3 victory at the Springfield Thunderbirds in an exciting Sunday afternoon contest.

The see-saw game also featured goals from Greg Carey (17th), Philippe Myers (7th) and Connor Bunnaman (8th) while Alex Lyon turned in a 30-save performance for his eighth win of the campaign. 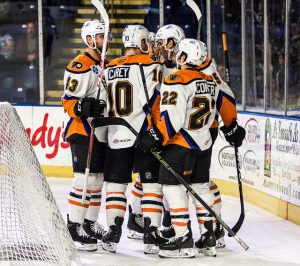 Friedman’s first career overtime goal was his third of the season and came following a nice touch my Misha Vorobyev as they criss-crossed in the 3-on-3 session. Taylor Leier also assisted on the play and had two helpers in the game. The second-year pro from Toronto by way of Bowling Green University has flourished in his sophomore campaign with the Phantoms and celebrated his big moment with a little leap into the glass thus capping the team’s busy New England road-trip.

Friedman’s snapper to the upper-right corner that knocked off the water-bottle almost didn’t come to be. Just a couple minutes earlier, an intercepted pass was turned into a length-of-the-ice breakaway for Harry Zolnierczyk who used to play for the Philadelphia Flyers and Adirondack Phantoms. But Alex Lyon kept the Phantoms alive with a blocker save on the Zolnierczyk 1-on-1 attempt. 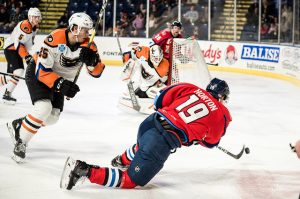 Lehigh Valley entered the third period with a 2-1 lead but the Thunderbirds struck for a pair of goals in the opening minutes of the final frame to take a 3-2 advantage. Connor Bunnaman tied the game at 3-3 via his 5-on-3 rebound conversion with just 8:05 remaining batting it home in mid-air following a slapper by Carey off the shoulder of Montembeault.

Carey opened the scoring at 6:55 into the second period with his team-leading 17th of the season after Conner’s backhand spinorama attempt in the slot bounced off a leg and perfectly out to a wide-open Carey in the right circle. Carey will return to Springfield in three weeks for the AHL All-Star Classic and will be joined by Phantoms captain Colin McDonald on the Atlantic Division All-Stars.

Carey’s 107 goals over the past 3.5 seasons is the most of any player in the American Hockey League. That includes 26 goals as a member of the old Springfield Falcons in 2015-16 and another 81 goals in the regular season and the playoffs in the past three years as a member of the Phantoms.

The T-Birds received a friendly bounce at almost the midway point of the game to even the score. A power-play faceoff win was corralled by Sebastian Repo in the low, left circle and while his stick was tied up by a Phantom it appeared the puck squirted between the sticks or off a skate and oddly fluttered over the shoulder of Lyon and into the cage for a 1-1 tie.

Myers struck at 13:16 into the second period to give the Phantoms the lead again on a perfectly placed and timed slapper from the right point that glanced off the fingers of Montembeault’s glove as it sped through to the top of the net.

The Thunderbirds regrouped in the third period to take the lead. Harry Zolnierczyk capped a nice sequence of passes on a 4-on-3 and moved in alone at Lyon who initially made a blocker save by Zolnierczyk was all alone still to deposit the rebound behind the right skate of Lyon to tie the game at 2-2 at 1:27 into the third period. 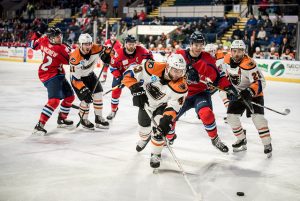 Josh Brown’s shot from the point at 6:50 into the third put the hosts ahead for the first time in the game while Lyon couldn’t spot the drive in time while battling through a screen at the net-front.

Bunnaman’s 5-on-3 mid-air swing at 8:05 pulled the Phantoms even again to set up the exciting overtime finish with Friedman’s winner.

Lehigh Valley out shot the Thunderbirds 44-33 and the Phantoms went 2-for-3 on the power play while Springfield to 1-for-4. Lehigh Valley is 3-2 against Springfield this season and the two teams will conclude the season series on Wednesday, January 16 in Allentown.

The Phantoms return to PPL Center with back-to-back games on Friday and Saturday nights against the Binghamton Devils and Hershey Bears. Tickets are available at PPLCenter.com