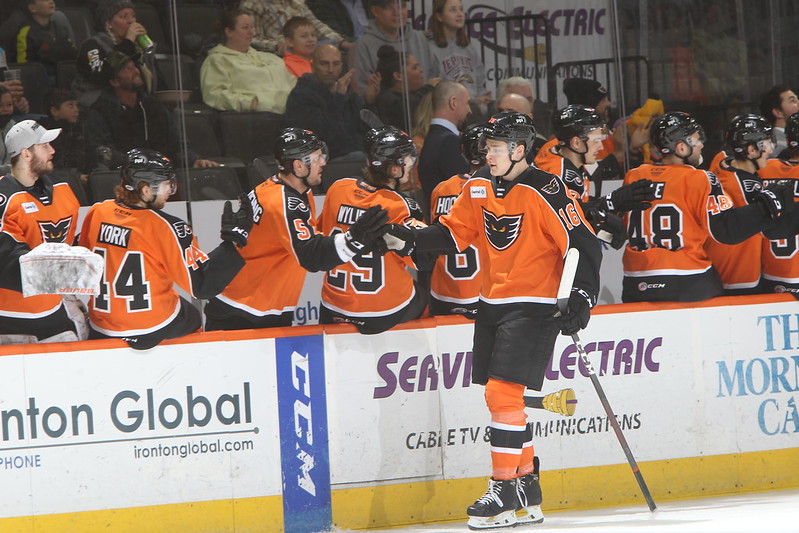 Strome and Wilson With Three Points Each

Lehigh Valley, PA – The Lehigh Valley Phantoms raced out to a 3-1 lead in the first period and never looked  back in a 6-3 victory over the Hershey Bears on Friday night at PPL Center.

Matt Strome and Garrett Wilson both had three-point performances on one goal and two assists apiece. The shorthanded Phantoms generated goals from six skaters with Brennan Saulnier (3rd), Alex Kile (3rd), Matt Strome (2nd), Logan Day (2nd), Cal O’Reilly (10th) and Garrett Wilson (11th) all finding the back of the net as the Phantoms improved to 4-1-1 against their rivals from Chocolatetown. 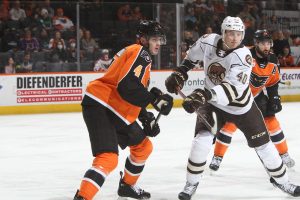 The Phantoms were able to do more with less as a Lehigh Valley record for fewest shots on game still saw the team generate six goals even though they only had 14 shots.

Brennan Saulnier opened the scoring on the team’s first shot of the game stuffing a wraparound past the left skate of Zach Fucale just 1:21 into the contest for a 1-0 lead.

Snappy passing led to Alex Kile’s drive to the net and backhand stuff five-hole on Fucale with Clendening and Strome speedily connecting from right to left to find the recent addition from the Maine Mariners with 11:32 remaining in the first.

Hershey got on the board with Mike Vecchione picking up the first of his three assists against his former team. Brian Pinho (4th) tipped a point-shot from Cody Franson to make it 2-1.

But Strome gave the Phantoms a two-goal lead at the intermission with his chip on top of Fucale set up by a strong feed by Linus Sandin at the right boards on a play also assisted by Garrett Wilson. Strome’s second goal of the season and third point of the game put the Phantoms ahead 3-1 in the closing minute of the opening frame.

The Phantoms boosted their lead to 5-1 with a pair of goals late in the second period. Logan Day rifled a bullet to the top of the cage with 5:47 left in the second for a 4-1 advantage. And Cal O’Reilly found the far post from the top of the right circle aiming for the upper-left corner on a power-play conversion to up the advantage to 5-1. Hayden Hodgson received a pair of assists in the period. Captain Cal was credited with his 522nd career assist on the Day goal, 9th most in AHL history.

Hershey surged back against the shorthanded Phantoms in the third period to make the game interesting. Due to injuries earlier in the game, Lehigh Valley was down to just nine forwards. 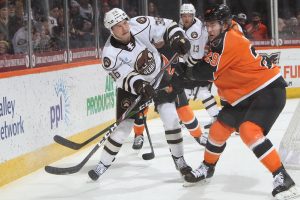 Axel Jonsson-Fjallby struck just 21 seconds into the third period on a blast from the left dot to make it a 5-2 game. Later, and with a pulled goalie, Mason Morelli scored a 6-on-5 goal from the right circle on a rebound of a Vecchione shot to cut the margin to 5-3 with just 4:51 to go.

The Phantoms everntually sealed the game wtih Egor Zamula’s ice-length clear that was chased down by Garrett Wilson for a one-handed backhand tap-in to the empty net with 38 seconds left for the 6-3 final. The empty-net goal in the final minute was also the Phantoms’ lone shot in a grinding third period.

Lehigh Valley beat its own team record for fewest shots in a game which had previously been 15 shots on December 5, 2015 at Hershey. The Phantoms’ 14 shots in a game did not set a new franchise record, however, which remains 12 shots on goal for the Philadelphia Phantoms on March 20, 2001 against the St. John’s Maple Leafs.