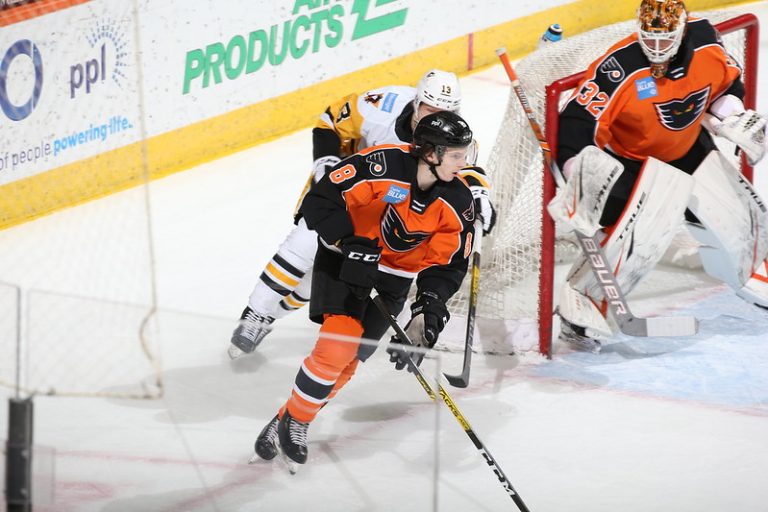 Lehigh Valley, PA – The Lehigh Valley Phantoms have announced multiple transactions this morning including the additions to the roster of defenseman Mason Millman as well as forwards Alexis D’Aoust and Brad Morrison.

Cates, 24, was a free agent signee with the Flyers out of the University of Minn-Duluth who is in his first full year of pro hockey. He has scored 2-8-10 with the Phantoms this season in 28 games while also scoring one goal in nine games with the Flyers this year. A Stillwater, MN product, Jackson is the brother of Noah Cates who is a Flyers draft choice at Minn-Duluth currently playing with Team USA at the Beijing Olympics

Millman, 20, was a round 4 pick of the Flyers in 2019. He has scored three goals wth five assists for Reading in eight games inclduing a two-goal game last week. The London, ONT native has played in 11 games with the Phantoms this season registering one assist and he played in 13 games for Lehigh Valley last year notching three assists. The former Saginaw Spirit rearguard missed two months due to an injury on October 17 in the second game of the season.

Morrison, 25, ls a lefty shot from Prince George, BC who has scored 8-21-29 with the Reading Royals in 28 games this season. He has 56 career games in the ECHL with the Ontario (Cal.) Reign and Rockford IceHogs scorin 13-12-25. He also has had ECHL stretches with the Fort Wayne Komets and Indy Fuel. Morrison was a Round 4 pick of the New York Rangers in 2015 out of the Prince George Cougars of the WHL where he had four consecutive 50+ point seasons.

This season, D’Aoust has played three games in the AHL including two games with the Belleville Senators and one game with the Providence Bruins. In the ECHL, with Jacksonville and Trois-Rivieres, he has played 75 career games scoring almost a point per game at 35-36-71.

The Phantoms return to action tonight at 7:05 p.m. against the Wilkes-Barre/Scranton Penguins and then will host the Hershey Bears on Sunday at 2:05 p.m.