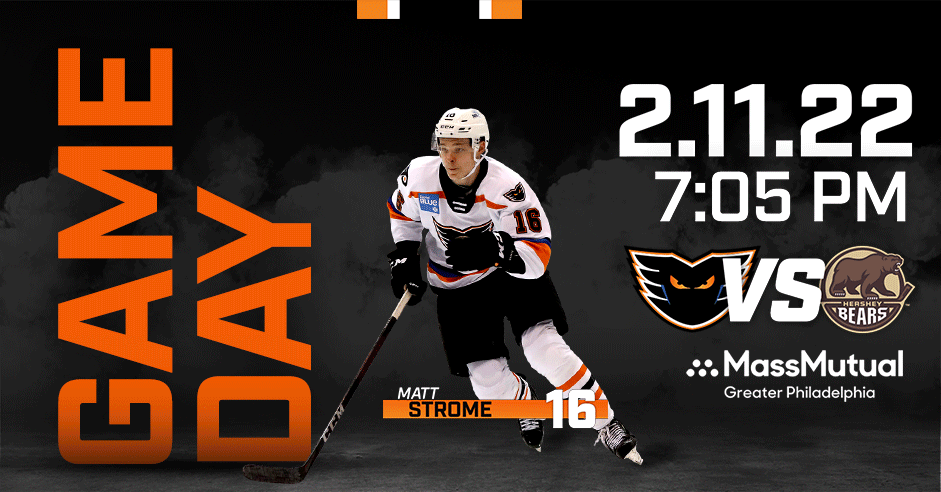 TONIGHT:
It’s a GAMEDAY at PPL Center presented by MassMutual as the Lehigh Valley Phantoms play host to the Hershey Bears, AHL affiliate of the Washington Capitals. It’s the beginning of the team’s big GO FOR GOLD weekend-long Olympics tribute with three games in a row at PPL Center. Lehigh Valley (15-17-8) has points in eight of it last ten home games (7-2-1). Hershey )23-13-6) is in second place in the Atlantic Division just percentage points behind first-place Hartford. The Bears are on a three-game point streak (2-0-1). Tonight is Game 2 of a six-game homestand for the Phantoms.

LAST TIME:
The Phantoms were shut out at home for the first time in over two seasons in a 5-0 setback againast the Belleville Senators. It was Lehigh Valley’s worst loss of the season and only the team’s second regulation loss at home in its last 10 games. Former Philadelphia Flyers blueliner Michael Del Zotto paced the B-Sens with one goal and two assists while Filip Gustavsson had 21 saves for his third career shutout. Lehigh Valley goalie Sam Ersson left the game in the third period due to an injury.

HERSHEY BEARS:
The Hershey Bears (23-13-6) are knocking on the door for first place in the Atlantic and trail Hartford by only a few percentage points. Lehigh Valley rallied in the last meeting for a 3-2 win on January 30 on Cal O’Reilly’s pair of shorthanded goals and Linus Sandin’s late game-winner. The Phantoms are 3-1-1 against Hershey entering Game 6 out of 14 in the rivalry series.
Hershey had a pair of 4-1 wins at Cleveland last weekend. Axel Jonsson-Fjallby leads active Hershey skaters with 13-16-29. Popular Phantoms’ alum Mike Vecchione has 10 goals including 7 in the last 12 games. Vecchione initially had been credited with a two-goal game at PPL Center on January 30 but a late scoring decision determined he did not tip on of the shots and thus he actually only had one goal in that contest.

UP NEXT:
The Phantoms play three home games this weekend beginning Friday night against the Hershey Bears on GO FOR GOLD weekend.