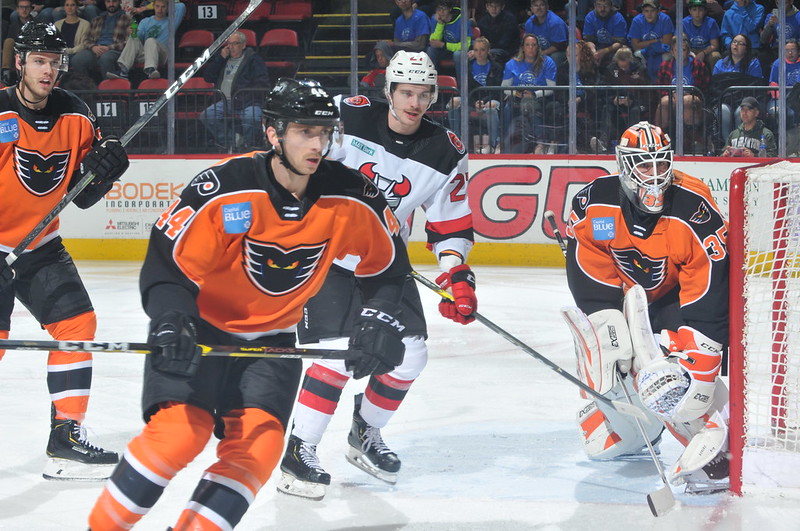 Binghamton, N.Y. – Andy Welinski’s power-play rocket was good for his third goal of the season and the hard-shooting defenseman also blasted shots off the post on two other occasions but the Binghamton Devils held on for a 3-1 win on Friday night.

Lehigh Valley (6-4-5) had a strong push in the third period in its comeback efforts but Devils goaltender Louis Domingue pushed through. 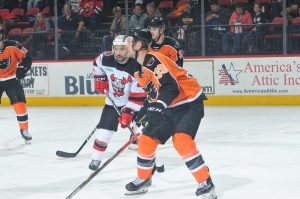 J-F Berube thwarted a 16-shot attack in the first period to keep the score 0-0. The 28-year-old Phantoms netminder had to contend with a number of point-blank chances and partial breakaways but his spectacular effort kept the Devils from striking early.

But Binghamton broke through with a pair of goals in the second period with tallies 100 seconds apart from Jacobs on a 2-on-1 in which he took the shot himself instead of passing and then a power-play strike from the high-slot by 32-year-old Street.

Lehigh Valley responded a couple minutes later with Andy Welinski’s power-play blast from center point. The first-year Phantom who formerly played with the Anaheim Ducks and San Diego Gulls has scored all three of his goals this season in the last five games. Welinski also found the iron with big blasts in the first period and third period. Greg Carey and Cal O’Reilly notched assists on Welinski’s second-period tally. 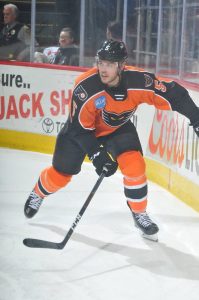 Maltsev’s quick put-back goal on a long rebound to the left boards stretched the Devils advantage to 3-1 in the early minutes of the third and Binghamton was able to hold on from there with several nice stops by winning goaltender Louis Domingue.

Both teams recorded 27 shots apiece and both went 1-for-5 on the power play. The Phantoms conclude their four-game road-trip at the Wilkes-Barre/Scranton Penguins on Saturday at 7:05 p.m. Lehigh Valley returns to PPL Center for a three-game homestand Wednesday, Friday and Saturday hosting the Charlotte Checkers and Belleville Senators during “Retro Week.”