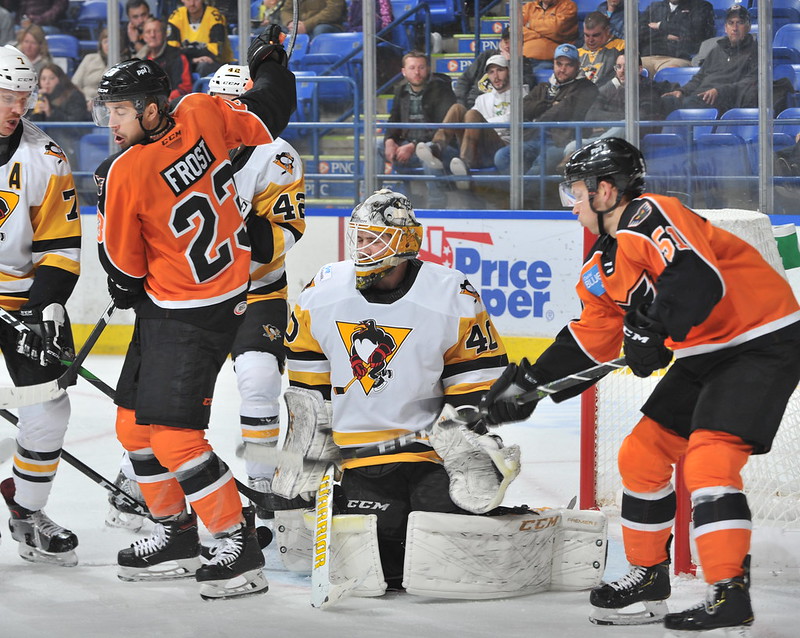 German Rubtsov appeared poised to tie the game midway through the third on a power-play tap-in on the backdoor set up by David Kase. But Tokarski rapidly shoved across with the right pad on a spectacular stop to preserve the lead. The Phantoms had a 6-on-4 power-play attack with an empty-net in the final minute but Wilkes-Barre/Scranton hung tough. 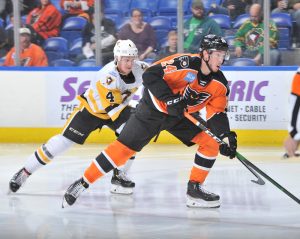 Alex Lyon was also splendid in net in his match-up with his former teammate. Lyon repelled 23 of 25 Penguins’ efforts in a performance that included a highlight-reel caliber save of his own late in the second period somehow stretching across with the glove to rob Zack Trotman on the backdoor.

Lehigh Valley (6-5-5) had secured points in the three previous outings against the Penguins, all at PPL Center, and now falls to 2-1-1 against Wilkes-Barre/Scranton this year. The two rivals will meet again in consecutive games around the Thanksgiving holiday.

Wilkes-Barre/Scranton (10-5-2) has not lost since its November 6 game at PPL Center when they fell to the Phantoms 4-2.

Misha Vorobyev (4th) scored on a rebound of a Greg Carey rocket off the pad of Tokarski in the opening minute of the second period to forge a 1-1 deadlock at the time. Tyler Wotherspoon also received an assist on the play. Vorobyev had been denied on a breakaway just a few seconds earlier in the period when his backhand effort was thwarted by Tokarski’s left pad.

Morgan Frost and Kyle Criscuolo both had big scoring tries later in the frame but their shots rang off the left post and stayed out.

The Phantoms primarily dominated play in the first period and blasted 13 consecutive shots at Tokarski in a stretch that lasted the majority of the frame. But the Penguins surged back at the end of the first with Sam Miletic (2nd) scoring off the rebound of an Adam Johnson shot as part of the game’s first power play with just 1:05 remaining in the frame for a 1-0 lead. 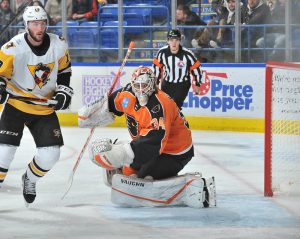 Lehigh Valley and Wilkes-Barre/Scranton were tied at 1-1 entering the third period with the Phantoms primarily carrying the play. But the Penguins converted just 1:29 into the final stanza off a left-circle face-off win that ultimately set up hard-shooting defenseman David Warsofsky (2nd) to strike on the stick-side of Alex Lyon.

Lehigh Valley out shot the Penguins 32-25. Wilkes-Barre/Scranton was 1-for-3 on the power play while the Phantoms finished at 0-for-3.

The Phantoms open a three-game homestand this week with games on Wednesday, Friday and Saturday at PPL Center. Lehigh Valley will host the defending Calder Cup Champion Charlotte Checkers for a pair of engagements before taking on the Belleville (Ontario) Senators on Saturday. The Lehigh Valley Phantoms will also feature a Retro Week promotion with retro-style inspired jerseys and 70s Night, 80s Night and then 90s Night all in consecutive games.