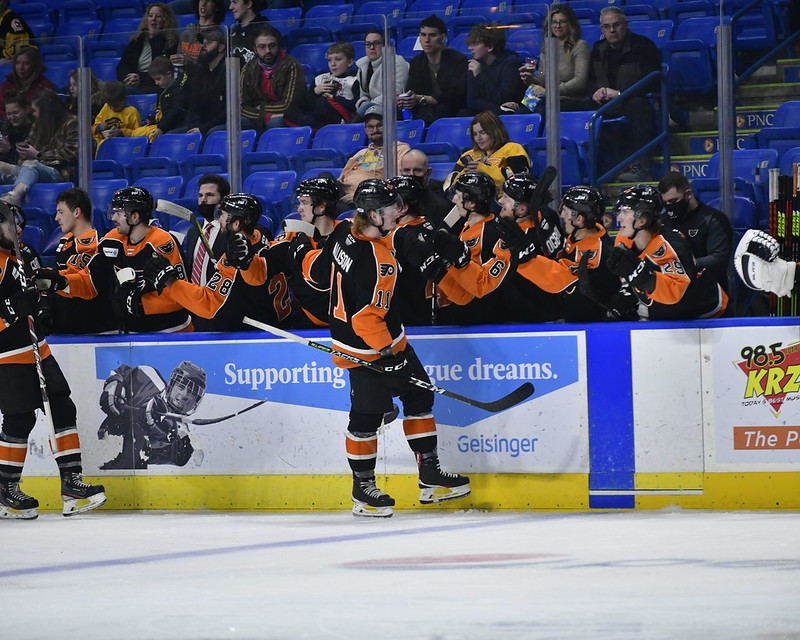 Wilkes-Barre, PA – Head coach Ian Laperriere was stuck at home for his birthday due to AHL COVID-19 protocols. But the frustration of not being at the bench was eased in the form of a 3-1 victory at the Wilkes-Barre/Scranton Penguins on Wednesday night. Wade Allison (3), Linus Sandin (4) and Maksim Sushko (5) struck for the Phantoms while Felix Sandstrom turned in a strong 28-save performance.

Assistant coaches Riley Armstrong and Jason Smith both missed games last weekend due to AHL COVID-19 protocols but were available to run the team tonight while Ian Laperriere was forced to sit this one out. 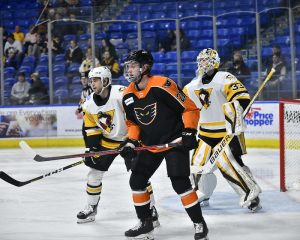 Wilkes-Barre/Scranton (11-16-4) out shot the Phantoms in the first period 10-7 but Lehigh Valley perhaps had the best chances of the opening frame on breakaways for newcomer Alex Kile and Wade Allison. Both were stuffed by Penguins goalie Alex D’Orio.

Lehigh Valley came up big to open the second period with back-to-back penalty kills and had a couple close chances on D’Orio as well.

The Phantoms finally were able to break the ice in the scoreless deadlock early in the third period with the first of their two man-advantage markers.

Wade Allison’s wrister from the right circle to the far post beat the lefty-style goalie D’Orio to the glove-hand side for a 1-0 lead at 3:57 into the third period. Adam Clendening recorded the first of his two assists on the play while Kile registered a point for a second consecutive game.

Allison now has a three-game goal streak as the hard-shooting winger continues to regain his top form following a pair of injuries that have limited his action this year. Allison was playing just his fourth game since his return from a month layoff and just his seventh game total this season.

Jordy Bellerive (5th) deflected a Jusso Riikola slapper for the only time Felix Sandstrom would get beaten in the game. The even-strength tally at 7:04 into the third evened the count at 1-1. 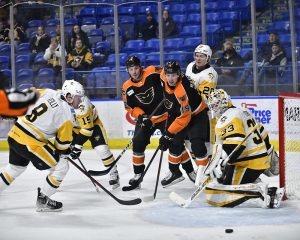 The Phantoms converted on the power play again with Linus Sandin deflecting a Cal O’Reilly shot from the left point. Clendening received his team-leading 16th assist and 21st point on the play. Sandin scored two goals in the same building on Friday night and now has four goals in his last five games. Sandin had missed two months with a frightening injury after a shot hit him in the face on October 17 at Hershey in just the second game of the season.

Sandstrom made some more strong stops down the stretch during the Penguins’ hardest push. Eventually, Maksim Sushko’s fifth goal of the season was buried into the empty net with just 39 seconds remaining to finish the win with Sandin and O’Reilly receiving assists on the play. O’Reilly is ninth all-time in AHL history with 519 career assists and moved into a tie for the team lead in assists (16) and points (21) with Clendening.

The Phantoms and Penguins had played each other three times in the last six days with the away team winning all three nights. Lehigh Valley prevailed at Wilkes-Barre/Scranton on Friday in a 4-3 decision before the Penguins exacted revenge in the form of a 5-2 victory at PPL Center on Saturday.

Lehigh Valley is 3-3-1 against the Penguins this year with five games remaining between the Pennsylvania rivals.

The Phantoms next play at the Charlotte Checkers on Saturday at 4:00 p.m. and Sunday at 1:00 p.m.

The next home game for the Phantoms is Sunday, January 30 against the Hershey Bears on meLVin Kids Activity Book Day for the first 1,000 fans age 14 and under.