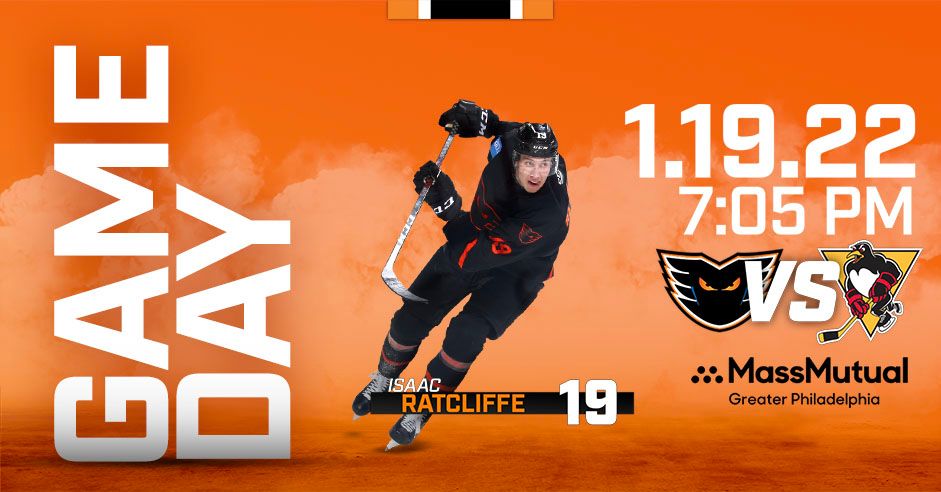 TONIGHT: It’s a Phantoms Gameday presented by MassMutual as the Lehigh Valley Phantoms play the first of five straight road games with a midweek clash at the Wilkes-Barre/Scranton Penguins. This is the third meeting in the last six days between the Pennsylvania rivals with the two teams splitting victories on each other’s home ice last weekend. Lehigh Valley is 2-3-1 against the Penguins entering Game 7 out of 12 in the rivalry series. The Phantoms are 10-12-8 and have points in 10 of their last 11 games (7-1-3) in a stretch that included a Lehigh Valley record 9-game point streak. Wilkes-Barre/Scranton had dropped eight straight before its current two-game win streak that included a 5-2 win at Lehigh Valley on Saturday followed by a 2-1 home triumph against Hershey on Sunday.

LAST TIME: The Lehigh Valley Phantoms snagged a standings point but fell in overtime to the Toronto Marlies 4-3 on Sunday afternoon at PPL Center. Joey Anderson’s hat trick goal was the overtime winner after Brett Seney tied the game for Toronto with just 2:01 left. Alex Kile’s first goal as a Phantom game with 6:17 remaining to give Lehigh Valley a 3-2 lead. Brennan Saulnier scored his second of the season and engaged in a spirited fight with Marlies captain Richard Clune. Wade Allison scored for a second straight game.

TRANSACTIONS: Forwards Max Willman and Connor Bunnaman have gone back up to the Philadelphia Flyers. Center Jackson Cates has returned from Philadelphia

OLYMPICS HONOR: Pat Nagle has been chosen to play for the United States National Team at the upcoming 2022 Winter Olympics in China. The 34-year-old veteran goalie will depart the Phantoms at the end of January. Congratulations, Pat!!

WILKES-BARRE/SCRANTON PENGUINS: The Penguins snapped out of their slump with consecutive wins last weekend over the Phantoms and Hershey Bears. Wilkes-Barre/Scranton (11-15-4) is aiming to pull itself out of the Atlantic Division cellar. Former Buffalo first-rounder Alex Nylander is heating up since arrive to the Penguins in a trade with the Chicago Blackhawks organization having scored 2-3-5 in six games in Wilkes-Barre. Rookie seventh-rounder Valtteri Puustinen leads the team with 11 goals including five against Lehigh Valley. The Penguins received significant forward reinforcements from Pittsburgh with Anthony Angello, Kasper Bjorkqvist and Filip Hallander. Phantoms alum Pascal Laberge was released from his quick weekend-stint PTO with the Pens.

NOTEABLES:
– Wade Allison scored goals in consecutive games in his first weekend back.  He had not played in almost a month since an elbow injury on December 17. Before that, Allison had played in just three games this season after sustaining an ankle injury during Flyers’ Training Camp in September.
– Cal O’Reilly and Adam Clendening both scored 1-4-5 in the three games last weekend. They are also tied for the team lead in scoring at 5-14-19 for both players.
– O’Reilly has points in sevn of his last eight games scoring 2-9-11 in that stretch. His 517 career assists rates 9th all-time in AHL history.

UP NEXT: The Phantoms travel to Charlotte for a pair of weekend games against the Checkers on Saturday at 4:00 p.m. and Sunday at 1:00 p.m. The Phantoms return to PPL Center on Sunday, January 30 at 5:05 p.m. against the Hershey Bears on Kids Activity Book Night.