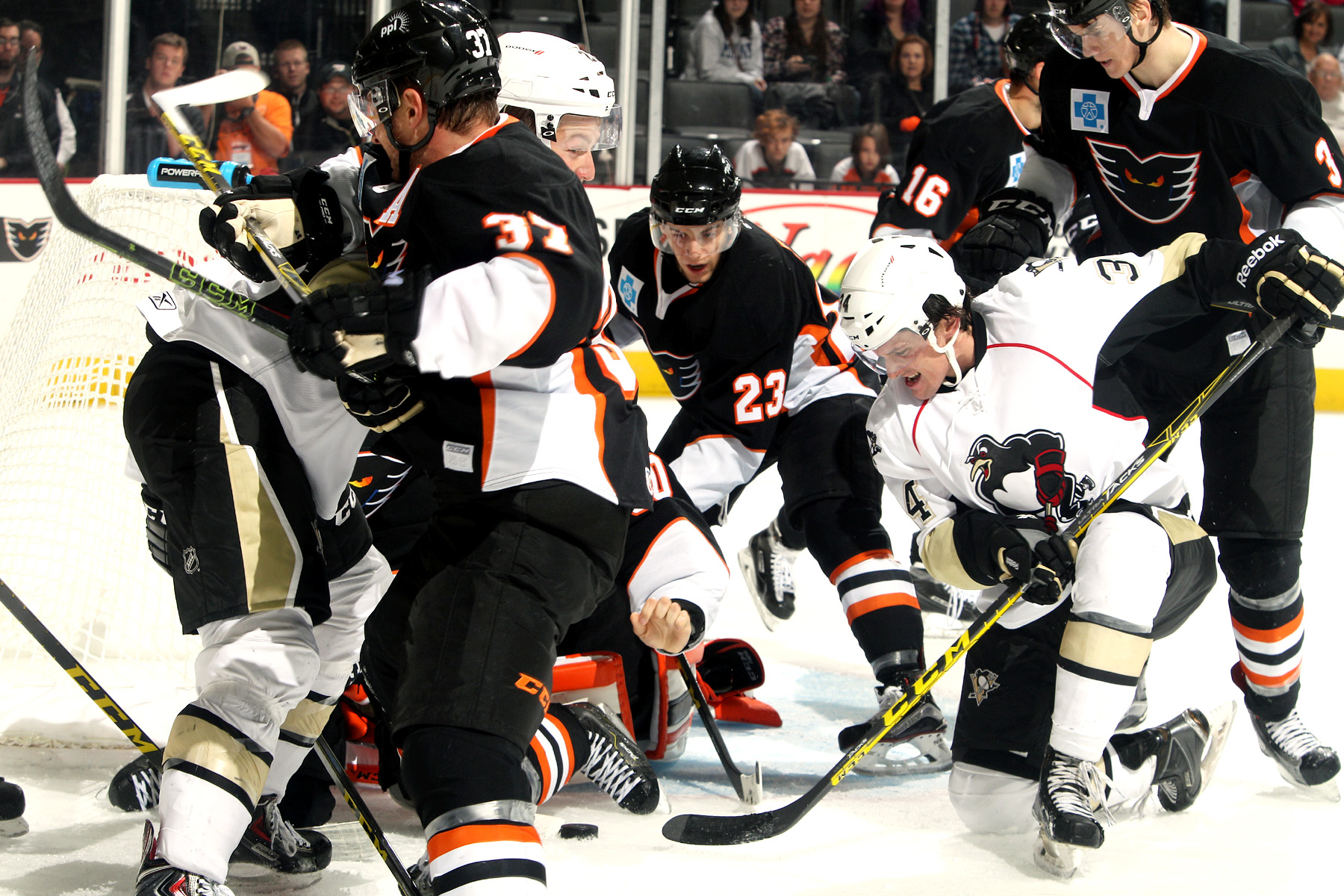 Lehigh Valley, PA – A little lady-luck led to a crucial Penguins turnover late in the third period and Danick Martel was ready to take advantage. The exciting rookie buried his one-on-one chance against Penguins goalie Tristan Jarry with 4:23 remaining for the game-winner as the Lehigh Valley Phantoms prevailed 4-3 over the Wilkes-Barre/Scranton Penguins in the preseason finale at PPL Center.

Petr Straka, Tim Brent and Nick Cousins also scored for Lehigh Valley to help the home skaters build a 3-0 lead. Martel also assisted on the Cousins goal before scoring the game-winner himself. Jason LaBarbera appeared in a Phantoms jersey for the first time in his 16-year career and turned aside 31 shots in the victory. 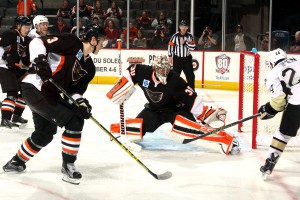 The game marked the second time between the two teams that a 3-0 lead would prove to not be secure. On Wednesday night in Wilkes-Barre, the Phantoms rebounded from a 3-0 deficit to even the score. The same fate would await Lehigh Valley in the Sunday rematch as the Phantoms’ 3-0 advantage was washed away by three consecutive Penguins goals in the third period.

Two of the Phantoms goals came off of Wilkes-Barre/Scranton turnovers including the first goal by Straka and the winner by Martel. Head coach Scott Gordon was pleased with his team’s ability to take advantage of their fortuitous opportunities.

“They were great plays by both those guys,” Gordon said. “They found their spots and a lucky bounce in front for Martel to be able to get it in front of the net, wide open but we won’t complain about it.”

Lehigh Valley opened the scoring with a pair of goals in the first period. Straka would strike about 11 minutes into the game on a nifty one-handed bank by Shayne Gostisbehere to connect with the speedy forward. Straka buried his chance five-hole on Jarry to provide the Phantoms with the 1-0 advantage.

Six minutes later on the power play, Taylor Leier turned on the right-side of the cage on the power play and drove a shot off the pads of Jarry. Tim Brent was waiting on the other side to chip-in the rebound. The 31-year-old veteran’s tally extended the Lehigh Valley advantage to 2-0.

The Phantoms would make it 3-0 almost a full period later with Danick Martel carrying up the left-wing and then finding Nick Cousins in the high-slot. The Phantoms’ leading scorer from a season ago blasted his bar-down drive over the right shoulder of Jarry and Lehigh Valley appeared comfortably in front 3-0. 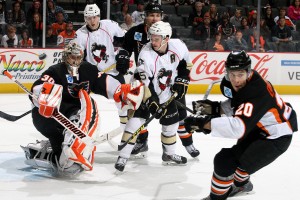 “I liked the 1st and 2nd periods,” Gordon said. “There were parts of the 2nd period that I really liked. The fact that we got the power plays and the fact that we were doing something right because they were taking penalties.”

Wilkes-Barre responded with three straight lamplighters in the first nine minutes of the third period to even the count. Sahir Gill’s individual effort down low found its way through LaBarbara. Then Ty Loney made it a one goal game on another bouncer in the slot with Gill setting up the rookie. And at 9:03 it was Oskar Sundqvist with an unassisted conversion to complete the Penguins’ comeback.

The Penguins were attempting to clear their zone but a dangerous pass into their own slot caromed off the back of the leg of one of their defenders and perfectly onto the stick of Martel right in front. Martel’s quick hands resulted in the winning goal with 4:23 left.

Wilkes-Barre/Scranton had a power-play and extra-attacker for the closing moments of the game but the Phantoms successfully killed the 6-on-4 situation to preserve the win. Tyrell Goulbourne had a number of big plays in the closing drama. 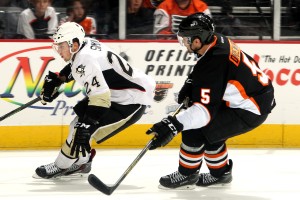 Next time out, the Phantoms do it for real. The exhibition games that don’t count in the standings are behind them and the regular season awaits.

“We can’t wait…for sure!” said Danick Martel enthusiastically. “The first real game for the season. We are all ready for it.”

Wilkes-Barre/Scranton out shot the Phantoms 37-24. Lehigh Valley was 1-for-5 on the power play while the Penguins finished at 0-for-4.

Jay Rosehill dropped the gloves with Wilkes-Barre’s Patrick McGrath and won his bout decisively against the undersized pugilist. Tim Brent ended up engaging the Penguins’ Ty Loney as well in an unplanned scrap that developed after push came to shove which came to punches.

Lehigh Valley and Wilkes-Barre/Scranton played split their decisions against each other in the preseason and will meet 12 more times in the regular season in some key Atlantic Division rivalry encounters.

After various roster decisions are made this week, the Phantoms will return for Opening Night on Saturday at 7:05 against the Syracuse Crunch. Opening Night will also feature a Rally Towel giveaway courtesy of the Morning Call. Tickets are available at 610-347-TIXX (8499), PPCLenter.com or in person at the Mealey’s Furniture Box Office.