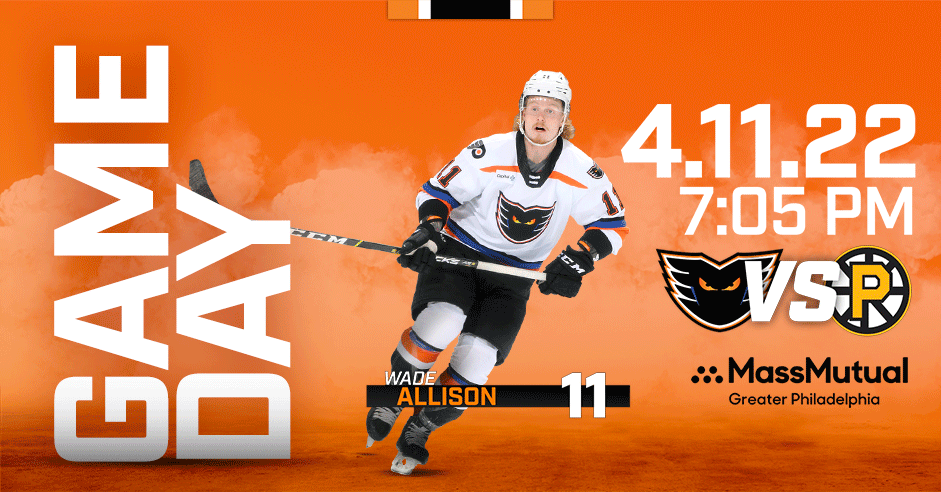 It’s a Phantoms GAMEDAY presented by MassMutual with a rare Monday night game at the Providence Bruins. Tonight’s game is the make-up of a postponement from January. The Phantoms will return to Providence next Tuesday, April 19 for another make-up date.
The Phantoms have won four of their last six games. After tonight, the Phantoms have a three-game homestand on Wednesday, Friday and Saturday.
Lehigh Valley (26-29-11) is playing game 67 of the season and there are 10 remaining including today.

LAST TIME
The Phantoms cranked up a season-high 44 shots on goal but veteran goaltender Cory Schneider was too strong with 42 saves in a 4-2 loss at the Bridgeport Islanders on Sunday. Lehigh Valley also hit the post with at least four of their shots. Adam Johnson’s (4th) deflection with under seven minutes remaining broke up the shutout bid and pulled the Phantoms to within a goal. But a strong individual effort for a shorthanded goal by Kyle MacLean with under two minutes remaining negated a huge opportunity for Lehigh Valley to equalize on a late power play. Garrett Wilson (16th) also scored for the Phantoms with 37 seconds remaining.

PROVIDENCE BRUINS
Providence (32-20-10) has dropped to third in the Atlantic after a stretch of two wins in 11 games including a six-game losing slide. More recently, the P-Bruins have won two of their last three including a 6-2 blowout over Bridgeport on Saturday. Troy Grosenick at 15-5-4 is the top goalie in the AHL with a 2.06 goals-against average and .929 save percentage. The P-Bruins’ defense is tops in the conference allowing 2.68 goals per game and their penalty kill is second-best in the conference (behind Charlotte) at 83.6%. Zach Senyshyn scored five goals against the Phantoms including a hat trick in November but he was traded by the Bruins to the Ottawa Senators’ organization. University of Wisconsin product Cameron Hughes leads the attack for head coach Ryan Mougenal’s gang. The Providence captain has scored 14-31-45. The Phantoms are 1-2-0 against Providence.

PHANTASTIC!
– Newcomer Adam Karashik made his pro debut on Sunday at Bridgeport. The defenseman is a former captain at Notre Dame and previously played four seasons at UConn before his graduate-transfer season.
– The Phantoms are 16-1-1 when scoring four or more goals. The Phantoms are 16-2-3 when leading at the second intermission.
– The Phantoms have won four of their last six games but have lost their last two away games.
– Wade Allison has nine goals in just 18 games this season. The energetic and popular forward has missed significant time with three different injuries this season. Allison has five goals in his last eight full games.
– Five Phantoms players have made their NHL debuts this season: Max Willman, Felix Sandstrom, Linus Sandin, Isaac Ratcliffe, Hayden Hodgson
– Adam Clendening is 4th among AHL defenseman in assists with 32. He is ninth in total points (37)
– The Phantoms power play is 9/36 (25.0%) in the last 10 games but also has two games out of the last three without a power-play marker.
– Cal O’Reilly has 19 goals this season to establish a new personal high. The 35-year-old captain of the Phantoms had 18 goals in a season 15 years ago in the 2006-07 season when he was a 20-year-old rookie with the Milwaukee Admirals.
– The Phantoms have played 66 games and have 10 remaining in the 2021-22 regular season.