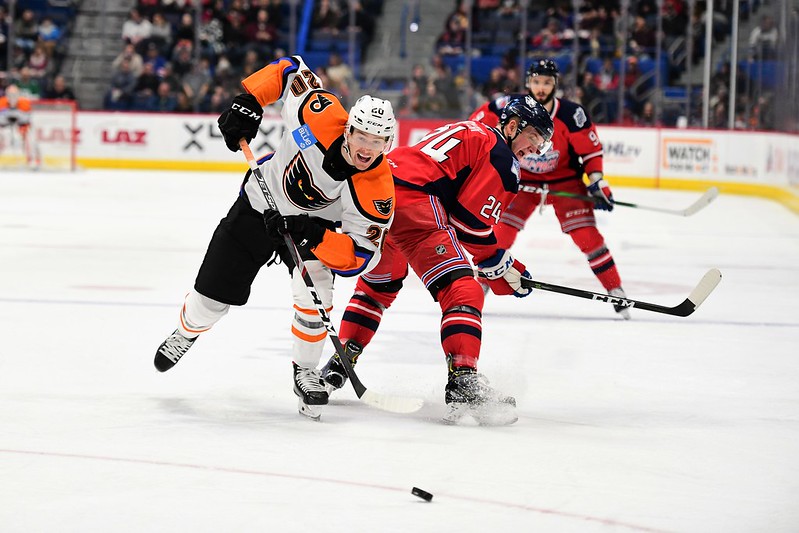 Hartford Rallies From Behind for 4-2 Win

The Phantoms had several strong chances for a tying goal in the final minutes of the third period but the Wolf Pack survived the late push and emerged with an empty-net goal with just 7.7 seconds remaining to seal the win. 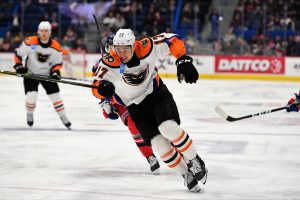 Alex Lyon entered in relief when the score was tied at 2-2 and stopped 20 of 21 Hartford shots in a strong effort.

Lehigh Valley raced out to a 2-0 advantage against highly touted goalie Igor Shesterkin on goals just 31 seconds apart. Max Willman deflected a point-shot by James de Haas and took the rebound off the end-boards to try to sneak it in behind Shesterkin from the left of the cage. In his effort to get the puck all the way through, Shesterkin slid back and knocked the puck into the net with his own skate providing the newly acquired spark-plug, Willman, with his third goal of the season at 5:39 into the game.

Greg Carey’s tap-in goal at the net-front came off a pass from the right of the crease by Cal O’Reilly just one day removed from his milestone 600th career AHL point. The play began with David Kase hustling in to win the puck on the forecheck thus extending his point-streak to four games. Carey’s 13th goal is the most on the team and put Lehigh Valley up 2-0.

But Hartford would storm back with a goal just 1:39 later on a shot from way over in the right corner by Darren Raddysh that squeezed through the left leg of starting goalie J-F Berube and the post.

Three minutes later it was Shawn McBride stealing the puck behind the Phantoms goal and connecting with an open Gropp in the slot who fired in the tying goal. Less than 11 minutes into the game, and before the first promotional timeout, the two teams had traded four goals and Berube made way for Lyon. 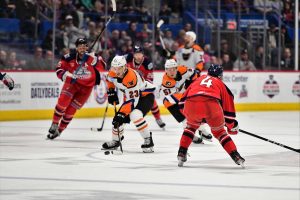 Both goalies made several strong stops for the rest of the night. Maksim Sushko out-raced a Hartford skater for the puck in the second period and got off a good shot on his shorthanded breakaway but was denied by Shesterkin.

Lyon made a breakaway stop as well as several other quality denials in preserving the 2-2 deadlock.

Hartford took the lead with 10:59 remaining in the third with Ryan Dmowski on the right boards connecting with an open Gropp in the slot who took advantage of his wide-open scoring opportunity to fire the puck between the right arm and ribs of Lyon for the Pack’s first lead of the night.

A hopping puck into the slot with under two minutes left was sent in by Andy Andreoff and saw Kyle Criscuolo and Chris Bigras both trying to push in the tying tally but the Hartford defense hung on. Two big blocks by Tim Gettinger courageously getting in front of Greg Carey slappers also aided the Wolf Pack cause. Finally Phil Di Giuseppe’s empty-netter in the final seconds would secure the victory.

The Phantoms are 2-2-0 against Hartford this season with a pair of wins at PPL Center and a couple losses in Hartford’s home building at XL Center. Lehigh Valley took the initial lead in all three games of its road-trip through Providence and Hartford. 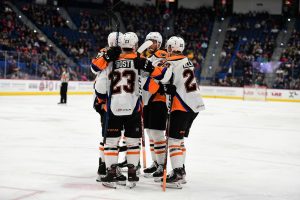 The Phantoms out shot Hartford 30-26. Both teams were 0-for-1 on the power play.

All teams are now on break for the AHL All-Star Classic while Morgan Frost will travel to Ontario, California to represent the Phantoms at the event on Sunday and Monday. The Lehigh Valley Phantoms return to action next weekend with road games on Friday, January 31 at Wilkes-Barre/Scranton and Saturday, February 1 at Hershey.

The next home games for the Lehigh Valley Phantoms are Friday, February 7 against Springfield and Sunday, February 9 at 3:05 p.m. against Hershey on meLVin’s Birthday Bash including a post-game skate with the Phantoms players.

NEXT TIME OUT: The Phantoms return from the AHL All-Star Break next Friday, January 31 at the Wilkes-Barre/Scranton Penguins. The Phantoms next home games are Friday, February 7 on American Heart Association Go Red Night and Sunday, February 9 on meLVin’s Big Birthday Bash including a post-game skate with the Phantoms players.