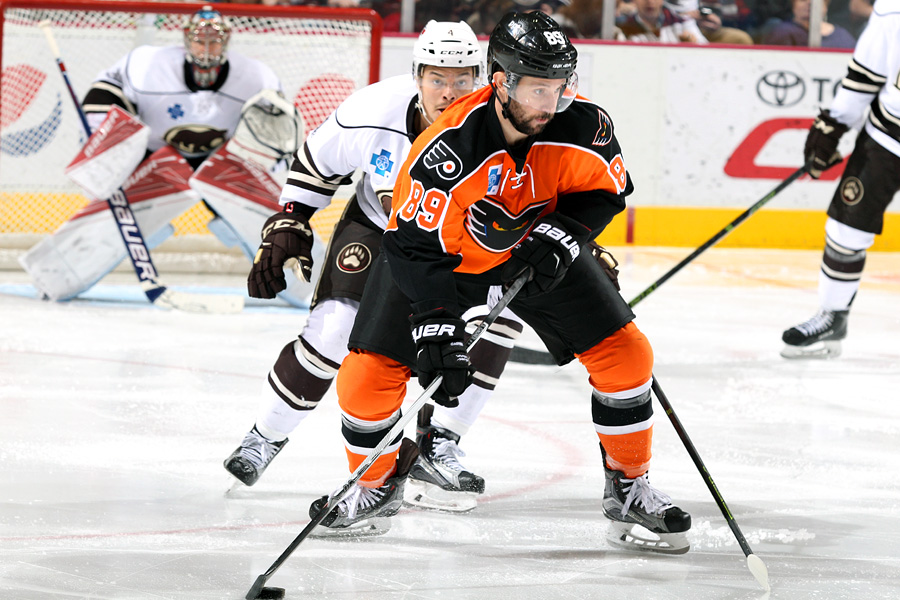 Hershey, PA – A pair of goals by Danick Martel and another tremendous performance by goaltender Jason LaBarbera led the Phantoms to a 3-1 win to conclude 2015 in a New Year’s Eve clash at Hershey. The Phantoms improved to 5-2-0 against the Bears this season and upped their road-trip record to 2-0-1 with still two more games to go in their stretch of five consecutive away contests.

LaBarbera turned aside 27 of 28 shots he faced and almost secured his second consecutive shutout but rookie defenseman Christian Djoos broke up the bid with just 2:35 to go with his 6-on-5 center-point laser from the blue-line. Still, it was the second consecutive stellar win for the 35-year-old netminder who posted a 35-save blanking at Wilkes-Barre in his previous start last Sunday. 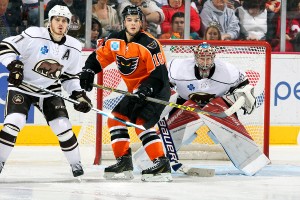 Aaron Palushaj’s seventh of the year started the scoring with his first-period power-play lamplighter assisted by Tim Brent and Samuel Morin. It was a nice secondary assist from the rookie defenseman Morin who crept in from the right point and unleashed a drive that handcuffed Bears goalie Justin Peters. Palushaj from the left of the cage was able to reach his stick into the blue and poke the puck between the legs of the stunned goalie for the 1-0 advantage. 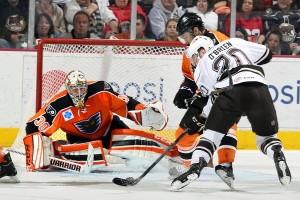 The goal was part of the second consecutive strong start for Lehigh Valley who posted a season-high 18 shots on goal in the opening period. This followed a 17-shot barrage in the first frame on Tuesday at Binghamton. Peters made some nice stops in those beginning minutes to keep the Phantoms from blowing things out of the water in the early-going.

Early in the first period, Lehigh Valley rookie Tyrell Goulbourne engaged scrappy Liam O’Brien in a spirited fight to help fire-up both teams and the crowd. The two combatants landed a number of punches in the scrap. It was the fourth fight of the pro career for Goulbourne and the first time in which he did not decisively win his bout.

Hershey turned up the pressure in the second period and Jason LaBarbera made some nice stops among his 10 total saves in the middle stanza to help the Phantoms find themselves and their offensive stride again. Jesper Pettersson connected with Martel speeding up the right-wing and turning the corner on the Hershey defenseman. The talented rookie drove right at Peters and was able to muscle in his close-range shot off the stick of the Hershey goalie for his first of the night and 11th of the year. Pettersson’s assist was the second helper and third point of the season for the season-year Swedish blueliner. 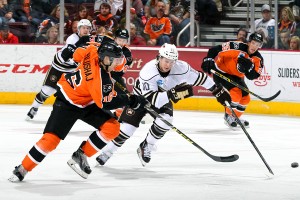 Protecting a 2-0 lead in the third period, LaBarbera’s best save of the night came on the team’s penalty kill with 11:34 remaining. Leaning to his right while tracking the puck, LaBarbera needed to quickly dive back the other way while pulling the splits to use his long wingspan and glove the hard backhander from Hershey’s leading goal-scorer, Paul Carey, in the slot.

That penalty kill extended Lehigh Valley’s streak to 22 consecutive opposing power plays without allowing a goal. The Phantoms have killed 30 of 31 in the past eight games for a gaudy 96.8% rate. In the past 16 games, since November 22, the Phantoms penalty kill unit has been successful 91.9% of the time with only six power-play goals allowed in 74 man-advantage opportunities against.

Overall, the Phantoms defense and goaltending has been exceptional over the past four games since the Holiday Break surrendering just four goals in total (not including a shootout winner that Binghamton scored in the extra-round on Tuesday).

Hershey pulled goalie Justin Peters with 2:45 to play and converted with a 6-on-5 tally on a center-point blast from Christian Djoos on a bullet over the right shoulder of LaBarbera. But Gagner’s win in the corner set up Martel to cruise up to the left-wing circle and bury an empty-better with 1:01 left for the 3-1 final margin. The goal was Martel’s 12th of the season. 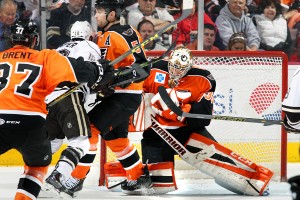 The Phantoms next travel to Portland, Maine for a pair of weekend matchups on Saturday and Sunday to commence the 2016 portion of the schedule. The Portland Pirates, AHL affilaite of the Florida Panthers, are in fourth place in the Atlantic Division, directly ahead of the hard-charging Phantoms. Saturday’s broadcast at 6:20 can be heard on 1470-AM or FOX1470.com or the iHeartRadio app. Sunday’s game at 4:00 can be heard on 790-AM or 790WAEB.com or the iHeart Radio app beginning at 3:25.