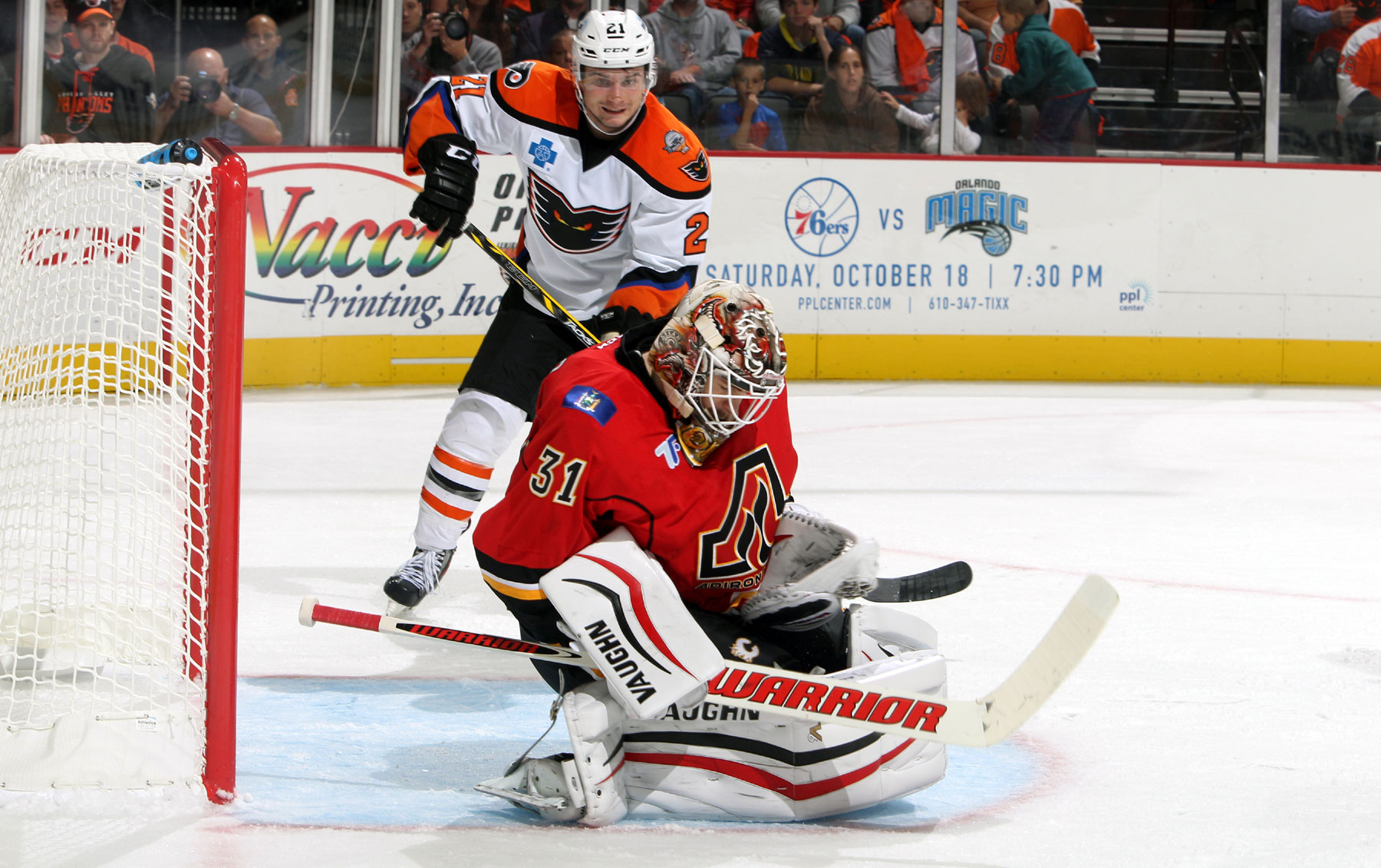 Another Two-Goal Game for Scott Laughton

Glens Falls, NY – The Phantoms’ return to their former home in Glens Falls, NY brought about some mixed emotions from the players as well as the fans who had cheered loyally for the team for the past five seasons. But in the end, the Adirondack faithful were able to show their new loyalty to their current team as the host Flames won their first game in franchise history defeating the visiting Phantoms 4-2.

Scott Laughton scored a pair of goals for the Phantoms for the second game in a row in helping Lehigh Valley rally from a 2-0 deficit to equalize by the second intermission. But a late goal by Markus Granlund with just 3:28 remaining would hold up as the game-winner for the Flames.

Lehigh Valley had won the opening encounter of the two-game set with a 4-3 overtime triumph in their home debut on Friday night. The pair of weekend tilts serve as the only match-ups this year between the Phantoms and the team occupying their former home.

Ten of the Lehigh Valley Phantoms in the lineup had played for the Adirondack Phantoms previously. That group included long-time Phantoms Brandon Manning and Oliver Lauridsen who had become very popular with the local fan-base in their three seasons with Adirondack. Both players are inching towards their 200th Phantoms game.

Glens Falls, New York served as the temporary home for the Phantoms for five seasons from 2009 through 2014 while PPL Center plans and construction were continuing. Part of the Phantoms’ mission was to help this once-proud hockey market prove their viability as an area that can continue to support professional hockey at this level. The Phantoms achieved their goal for this community as the city was able to attract the Calgary Flames affiliate to continue the tradition of American Hockey League games which began in 1979 with the 20-year run of the Adirondack Red Wings.

Anthony Stolarz made his professional debut for Lehigh Valley and made several dazzling stops among his 32 total saves on the 35 shots he had faced. Joni Ortio in net for Adirondack was the difference maker for the Flames with a sterling 36-save performance to earn the win.

Adirondack raced out to a 2-0 lead in the opening 11 minutes of the game on goals by Markus Ferland and Michael Granlund. The second of those tallies came on a hard wrister from the top of the right circle on a rush into the zone on the power play.

The Phantoms recovered one of those goals a few minutes later when Scott Laughton would race out of the defensive-zone to burn past the Adirondack blue-liners for a short-handed breakaway. Laughton moved the puck expertly from forehand to backhand to flip his third goal of the season over the left-leg of Ortio for the 3-on-4 short-handed tally.

Laughton’s first goal of his professional career was also a shortie having accomplished the feat a couple seasons ago for the Adirondack Phantoms.

The talented 20-year-old rookie who was a first-round selection of the Flyers in 2012 was at it again late in the second period once again showing he enjoys extra open-ice when the situation arises. Skating 4-on-4, Laughton weaved across the line and carried the puck all around the zone before connecting with Taylor Leier behind the net. The give back to Laughton in the slot resulted in a spectacular left-leg denial by Ortio but Laughton was able to convert on the rebound moving to his right to the score at 2-2 with just 13 seconds remaining in the period.

Both goalies made some great stops throughout the deadlocked third before Granlund second of the game broke the tie with 3:28 left. Dustin Stevenson’s late empty-netter completed the scoring.

The Phantoms out shot the Flames 38-36 as both netminders saw plenty of action with more back-and-forth racing similar to the Friday night encounter at PPL Center. Lehigh Valley was 0-for-3 on the power play while Adirondack was 2-for-6.

The Phantoms return to PPL Center next Friday evening when they renew their heated rivalry with the Hershey Bears. It will be the 185th all-time meeting between the Phantoms and Bears dating back to the beginning of the Philadelphia Phantoms in 1996.

Tickets for next Friday’s game and all regular season home games are on sale now at the Mealey’s Furniture Box Office at PPL Center (701 Hamilton Street), by calling 610-347-TIXX (8499) or logging on pplcenter.com.

Friday, October 24 (7:05) – Hershey Bears at Lehigh Valley Phantoms. A renewal of one of the great rivalries in the American Hockey League!