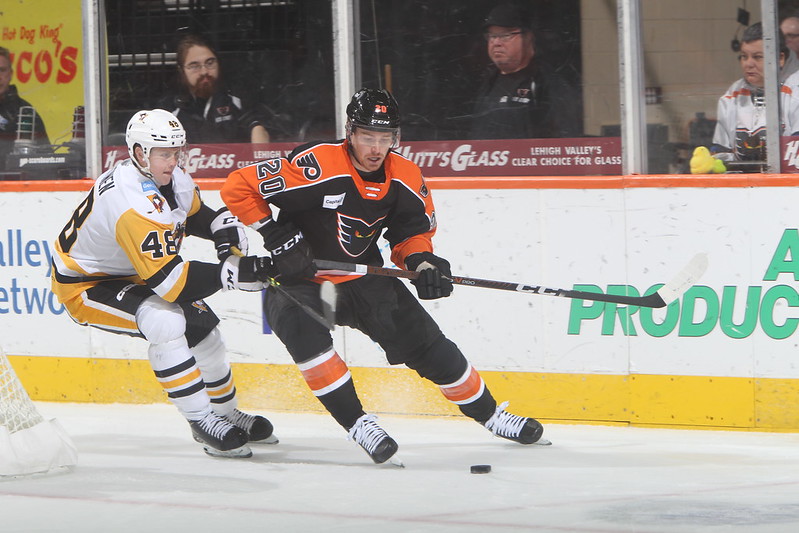 Lehigh Valley, PA – Max Willman (2nd) scored an impressive opening goal after he was knocked down and tripped up but the Phantoms couldn’t break Dustin Tokarski after that as the visiting Penguins emerged with a late 3-1 victory on Friday night at PPL Center. 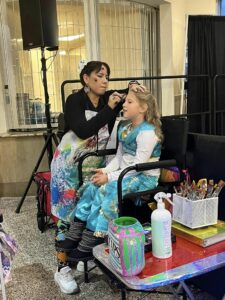 The opener of “Haunted on Hamilton” Weekend featured lots of fun for the kids with face painting and photos with our special Halloween theme.

Sam Ersson (0-2-1) was strong throughout the night in a 32-save performance but Wilkes-Barre/Scranton broke a late 1-1 tie with a pair of goals in the final 2:33 of regulation. Valterri Puustinen (3rd), Tyler Sikura (1st) and Corey Andonovski (2) scored for the Penguins while Tokarski registered the win against his former team with 22 saves.

The game also marked a pair of impressive milestones for the Phantoms including Head Athletic Trainer Brian Grogesky’s 1,500th game in professional hockey dating back to the beginning of his career in 2001 with the Reading Royals of the ECHL. Grogesky was recognized for his impressive milestone accomplishment to a nice ovation from the fans and stick-taps from the Phantoms players. It was also forward Garrett Wilson’s 700th career professional game and he received an ovation as well.

Hayden Hodgson delivered possibly the biggest hit of the season when he leveled former Phantom Mark Friedman on the forecheck to jolt the Phantoms to life following a strong start for the visitors. Friedman tried to return the favor a couple minutes later crashing into Hodgson after which he exchanged words at the Phantoms bench in a feisty opening period of the renewed rivalry.

Ersson pulled off a miraculous left-pad save on Nathan Legare who was open in the slot while Ersson was pulled to his right. The highlight-caliber denial was one of 14 strong stops in the opening frame for the second-year goaltender.

Max Willman was tripped up after an intercept while driving through the defense. But he was still able to get off a shot while down on the ice and somehow pushed the puck through five-hole on Tokarski with 1:46 remaining in the first period to give the Phantoms a 1-0 lead.

The second period had a more dialed-down pace than the back-and-forth opening frame. Neither side registered an official shot on goal for the first several minutes while the Phantoms engaged in some strong clamp-down defense in front of Ersson. 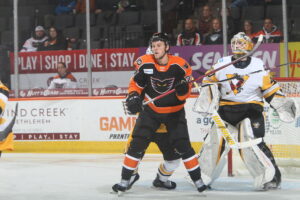 Wilkes-Barre/Scranton eventually would get its chances though thanks in part to four power plays in just the second period alone. Puustinen took advantage with a set up by Drew O’Connor and Alex Nylander on a fleury of shots that had Ersson scrambling. The Penguins had tied the game with their power-play marker with 5:54 remaining in the second period.

It looked likely that the game might become the Phantoms’ third overtime contest in five total games on the season. But a turnover led to a Tyler Sikua tally with 2:33 left to give the Penguins the lead and then Corey Andonovski raced past the coverage to accept a breakaway pass from Jonathan Gruden with 1:19 left to provide for the 3-1 final.

The Phantoms are 1-0-1 against the Penguins this season. Lehigh Valley went 0-for-3 on the power play while the Penguins were 1-for-6. Wilkes-Barre/Scranton outshot the Phantoms 35-23.

The Lehigh Valley Phantoms conclude their four-game homestand AND their “Haunted on Hamilton” weekend on Saturday night against the Bridgeport Islanders. Kids in costume can join meLVin for a parade on the ice during the first intermission. Face painting and more Halloween-Fun will be back for the Saturday Night Hockey Live engagement featuring DJ Angel B.