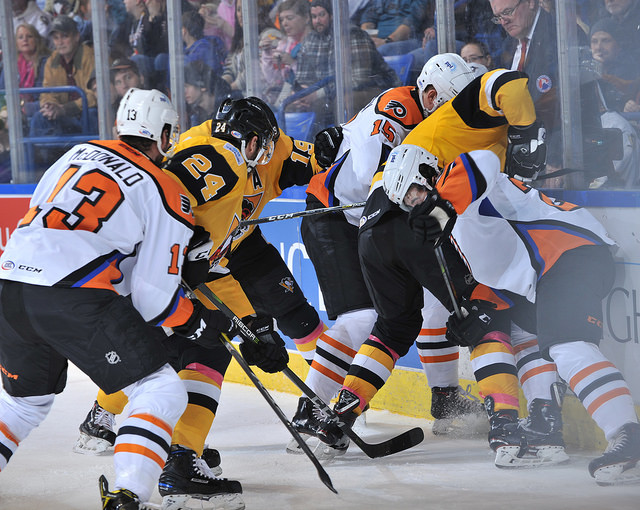 Wilkes-Barre, PA – Tristan Jarry turned aside 34 out of 35 Phantoms drives to lead the Wilkes-Barre/Scranton Penguins to a hard-fought 2-1 victory over the Lehigh Valley Phantoms in a Saturday night showdown of the top two teams in the Atlantic Division. Chris Conner (11th) broke through in the third period against his former team in the comeback effort but the Phantoms were unable to find the equalizer. 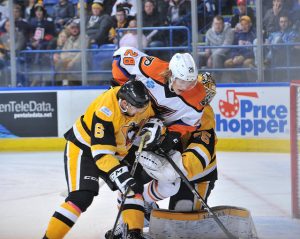 A pair of young talents both recently returned from Pittsburgh, Jean-Sebastian Dea (11th) and Daniel Sprong (20th), provided the Penguins’ offense in the first period and then Wilkes-Barre/Scranton somehow successfully held on from there.

Lehigh Valley’s five-game point streak (4-0-1) came to a conclusion as the Phantoms also sustained just their second regulation loss in the last eight games. Like many recent match-ups between the two Keystone State rivals, the teams seemed to bring out the best in each other in a feisty affair filled with playoff-style intensity.

The Phantoms had won four of the last five encounters from the Penguins before Jarry made one dazzling denial after another in thwarting the efforts of the Phantoms skaters. Lehigh Valley is 5-4-1 against the Penguins this year who have now won eight straight at home and haven’t lost to a visiting team since the Phantoms emerged from Mohegan Sun Arena with consecutive victories on December 23rd and 27th. 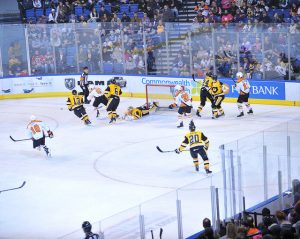 Jarry’s two best show stoppers perhaps came in the first period when he had a quick reaction with the glove on a Greg Carey blast from the high slot and then later kicked out the right pad to somehow knock away Travis Sanheim’s effort on the backdoor. Jarry also windmilled his left arm in the closing seconds to grab an entry by Colin McDonald from behind the goal that deflected off a stick and a skate and seemed destined to find the cage for a tying tally in the third. He also denied Mike Vecchione point-blank in the second period when the Penguins defense lost coverage on the talented rookie scorer allowing Conner’s entry-pass to set up the Grade-A scoring chance.

The Penguins roared out to a rapid start in the opening minute when Dea struck from way over in the right corner on a perfectly placed shot off the far post and in. His goal just 26 seconds into the game was the fastest conversion Lehigh Valley had surrendered this season.

After that early break the ice was tilted heavily in the Phantoms’ favor. With a 10-2 shots advantage to start, the Phantoms continually peppered away on Jarry including the two spectacular chances for Carey and Sanheim that somehow stayed out.

But Wilkes-Barre/Scranton weathered the storm and then generated a few chances of their own eventually earning a power play on which rookie talent Sprong would cash in via a one-timer rocket from the right circle to the far side of the cage for a 2-0 lead. 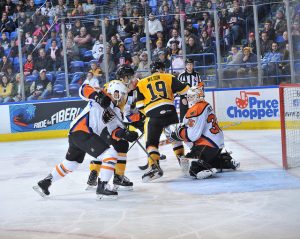 The Phantoms struck back in the third period on the power play with Phil Varone rushing up ice and gaining entry into the zone via a snappy pass to Oskar Lindblom on the left wing. Conner was ready in the slot for Lindblom’s pass to the middle in transition. Conner potentially didn’t get all of the puck on his shot but still beat Jarry to the left skate with 11:00 remaining in regulation for the Phantoms to break through.

Chris Conner has score in consecutive games and the 34-year-old winger has produced 10 points against the Penguins of his 29 points in total on the season.

Phil Varone entered the game in a five-way tie for the league lead in scoring. His assist was good for his 44th point.

Lehigh Valley pulled goaltender Dustin Tokarski in he closing two minutes but McDonald’s effort from the back of the net that was eventually speared by Jarry with 28 seconds remaining was the closest the Phantoms would come to evening the score. 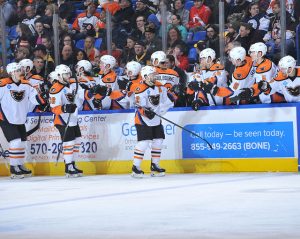 Both teams went 1-for-5 on the power play. Lehigh Valley’s record moved to 27-14-6 while the Wilkes-Barre/Scranton Penguins improved to 28-12-4.

The game marked the last visit to northeast Pennsylvania for the Phantoms. Wilkes-Barre/Scranton has two more trips to PPL Center on the docket including one in a couple weeks and another in the regular season finale on April 14.

The Phantoms played their lone road contest in a stretch of eight games that has seven on home ice. Lehigh Valley is back for a three-game homestand this week hosting the Charlotte Checkers on Wednesday evening followed by match-ups with the Hershey Bears and Rochester Americans on Friday and Saturday. Secure your tickets in advance at PPLCenter.com or by calling 610-347-TIXX [8499].