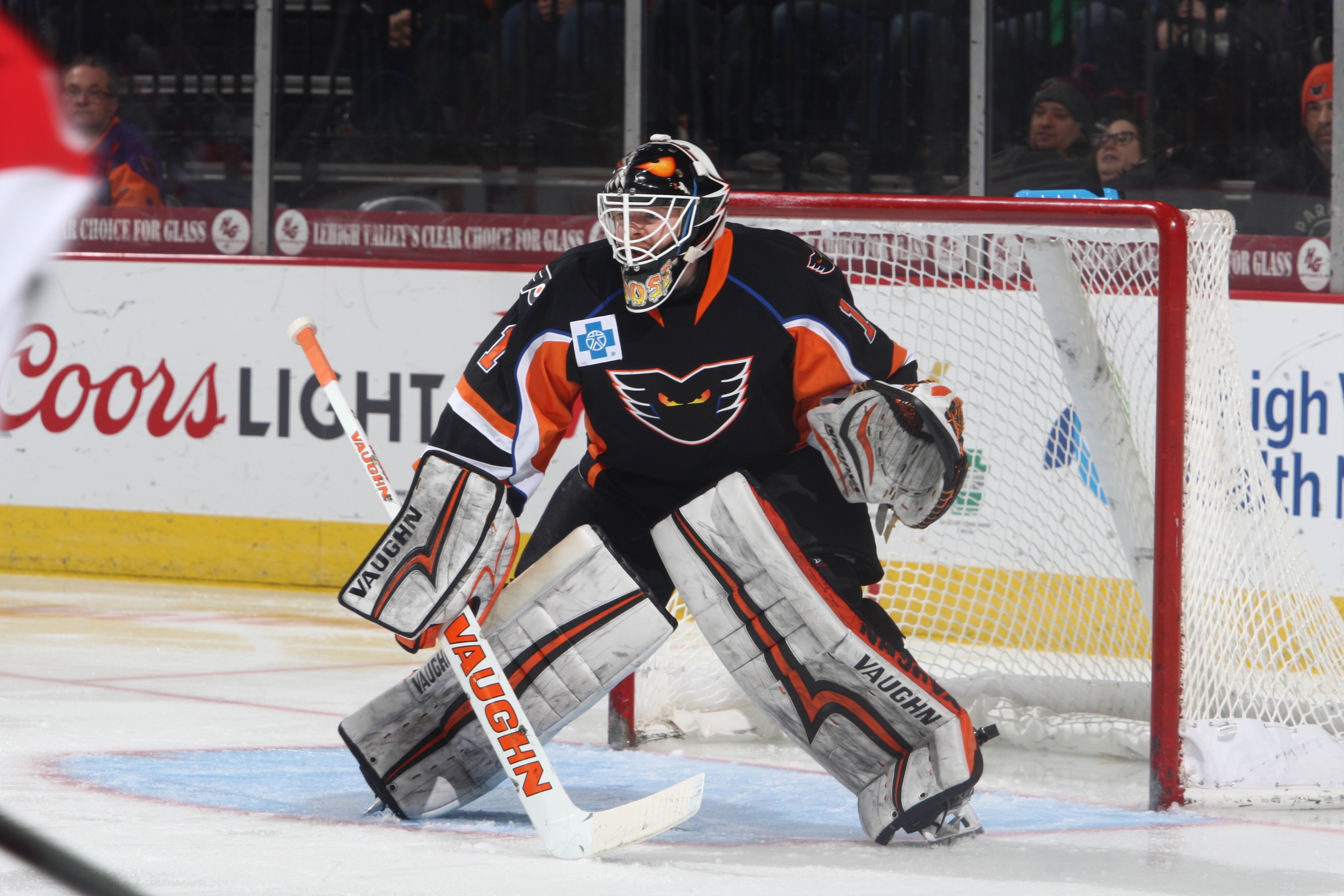 Lehigh Valley, PA – Goaltender John Muse turned in a stellar 38-save performance Friday evening as the Lehigh Valley Phantoms returned from the AHL’s All-Star Break with a 3-2 victory over the Charlotte Checkers in front of 7,444 fans inside PPL Center. 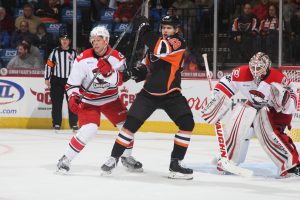 With the win, the Phantoms improved to 27-13-3-3 overall this season as Lehigh Valley extended its current point streak to five consecutive games (4-0-1). The Phantoms continue to lead all Atlantic Division teams in standings points (60) and are tied for the division lead with 27 victories this season.

Fresh off being named the ECHL’s Goaltender of the Month for January, Muse arrived in Lehigh Valley early Friday morning and made an instant impact between the pipes turning aside 12 of Charlotte’s 13 first period offerings. The 29-year-old netminder from East Falmouth, Massachusetts then denied all 12 second period shots before turning aside 14 of 15 third period bids in earning his third AHL win of the season.

T.J. Brennan (10th), Chris Conner (10th) and Cole Bardreau (3rd) provided the offense in front of Muse as the Phantoms improved to 3-2 this season against Charlotte and are now an impressive 14-1-3-3 in one-goal games this year. 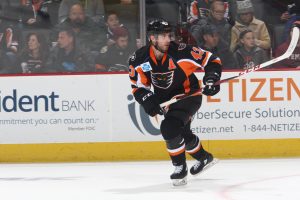 Brennan’s goal was a historic conversion as he became the first defenseman in AHL history to compile eight double-digit goal campaigns. Through his illustrious nine-year professional career, Brennan has now recorded 144 goals, 265 assists and 409 total points across 556 career AHL outings.

Finally, Bardreau’s conversion was part of a multi-point effort as the third-year forward paced Lehigh Valley’s offense with a goal and an assist in registering his second multi-point outing this season.

Charlotte opened the scoring just prior to the midway point of the first period when, while on the power play, Lucas Wallmark fed a perfect cross-ice pass to the left side that connected with Zykov who promptly slammed home his team-leading 23rd goal of the season. Wallmark and Trevor Carrick assisted on the man-advantage marker tallied 9:46 into the opening period, which was the Checkers’ Eastern Conference-leading 42nd power play conversion this year. 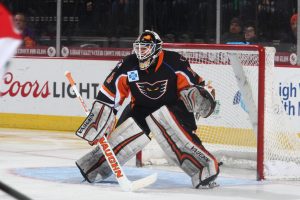 The Phantoms leveled the contest with just over seven minutes remaining in the middle stanza when a relentless forecheck produced overwhelming pressure in the attacking end leading to a one-timer from the right wing by Brennan that sizzled into the back of Charlotte’s net for Brennan’s 10th goal of the year. Nic Aube-Kubel and Greg Carey assisted on the even-strength strike netted 12:49 into the second period.

Lehigh Valley then grabbed its first lead of the night in the dying moments of the middle frame when Conner gained speed down the right wing before sliding a puck into the goal crease that deflected off a Charlotte skate and into the back of the Checkers’ goal. Bardreau and Travis Sanheim assisted on Conner’s 10th tally of the year that came 19:22 into the second period.

Charlotte remained resilient though and evened the Atlantic Division showdown just over seven and a half minutes into the third period when All-Star forward Warren Foegele slipped free on a breakaway before converting his 21st goal of the season. Roland McKeown garnered the only assist with a well-time stretch pass leading to the five-on-five conversion buried 7:35 into the final frame of regulation.

The Phantoms didn’t back down though and regained the lead for good with exactly three minutes left in regulation when Bardreau expertly redirected Radel Fazleev’s shot into the back of the Checkers’ cage for his third goal of the season. Reece Willcox collected the secondary assist on the even-strength strike as Lehigh Valley improved to 19-0-2-1 when leading after two periods this season.

The Phantoms cap this week’s action on Saturday when the team invades Mohegan Sun Arena in Wilkes-Barre/Scranton for a 7:05 p.m. clash with the rival Penguins.