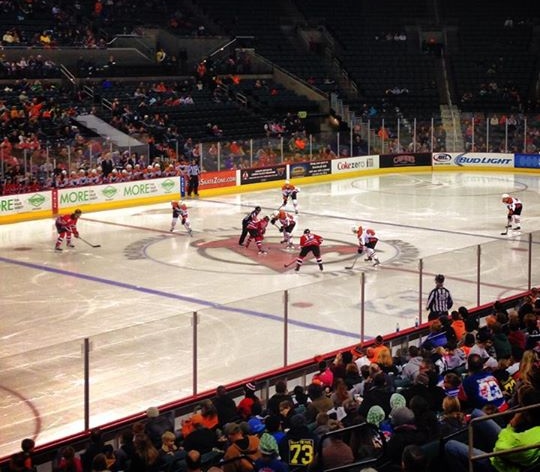 Atlantic City, NJ – Lehigh Valley Phantoms fans have certainly been getting their money’s worth this season. Extra hockey has been a hallmark of the 2014-15 campaign. The Phantoms played their eighth overtime game of the season and second consecutive such encounter of the weekend in a 4-3 decision for the host Albany Devils on Sunday evening in Atlantic City.

Trailing 1-0 into the third period, the Phantoms received goals from Taylor Leier (8th), Zack Stortini (3rd) and Andrew Gordon (7th) to take leads of 2-1 and 3-2. But Joe Whitney quickly answered with tying goals each time the Phantoms had gained the scoreboard advantage. And then Tim Sestito’s second goal of the game would come after regulation for Albany’s first overtime victory of the season.

The Phantoms completed another grueling three-in-three weekend with a 1-1-1 mark securing three out of a possible six standings points. Lehigh Valley had the disadvantage of playing their third weekend game and second straight tiring overtime tilt against an Albany team who entered the contest fresh following days off for the Devils on Friday and Saturday.

Lehigh Valley also had to switch their anticipated lineup at the last minute when Blair Jones left during pregame warm-ups with an apparent injury. But similar to their Saturday night victory at PPL Center over Wilkes-Barre/Scranton, the Phantoms were able to battle through the adversity and grind out a solid effort on their way to securing the standings point.

Albany struck first and carried a 1-0 lead for much of the day on a Tim Sestito blast from the left circle following a Paul Thompson interception at center-point. Sestitio’s drive short-side past the blocker of Lehigh Valley goalie Rob Zepp at 13:43 of the first would be the only tally for either side for the next 45 minutes.

The Phantoms finally broke through seven minutes into the final period with Taylor Leier’s high-slot blast beating Albany goalie Scott Wedgewood. Leier’s team-leading eighth tally of the season was set up by a nice steal and quick pass by Austin Fyten for an impressive looking assist from behind the Devils goal.

Lehigh Valley would take the lead just three minutes later when Zack Stortini pulled the puck away from Wedgewood’s attempt to dive and cover the rebound of a Robert Hagg shot. Stortini neatly kept the play alive and was then able to curl the puck around the prone netminder and tuck it into the cage for his second goal of the weekend and third of the season with Hagg and Delisle receiving assists.

The Phantoms first lead of the day wouldn’t last long though. Just 100 seconds later, Joe Whitney would tee-up a big one-timer from the left dot to beat Rob Zepp with just eight minutes in the third to forge a 2-2 deadlock.

Andrew Gordon quickly put the Phantoms back out in front just 27 seconds after that with his drive from the high slot with 7:33 remaining for his seventh of the season. Kevin Goumas and Jason Akeson had worked the puck into the zone and set up the play although the Gordon goal was officially listed as unassisted perhaps with a quick Albany possession and turnover from the right boards while Goumas was attempting to center.

Whitney again would even matters for the Devils this time with under six minutes remaining. He tied the score at 3-3 with his fine spin-move in the high crease to curl the puck around the right skate of Zepp following a centering feed from Rob Thompson. The scrappy, little winger from Boston College may be only 5-feet-6 but has loomed large against the Phantoms in past seasons when the former Adirondack Phantoms and Albany Devils were top rivals playing each other 12 times per year.

Whitney almost finished the contest with a flourish but his bid for a hat-trick game-winner with seven seconds left on a drive from between the circle would be kicked aside by Rob Zepp to set up the second consecutive overtime game for the weary Phantoms contingent.

Albany’s Graham Black almost won the game with a shot through the right chest of Zepp that dribbled just barely wide of the left post and then had to be swept away from an open net by hustling Lehigh Valley defense.

But veteran Mark Fraser would steer the team to victory with his 3-on-2 push into the Phantoms zone finding Tim Sestito on the back of the crease. Rob Zepp made one spectacular save with the left leg kicked across on Sestito but the younger brother of former Phantom and Philadelphia Flyer Tom Sestito was not to be denied on his second crack at it and was able to convert for the game-winner.

The Phantoms record stands at 11-10-4 after playing a combined total of 190 minutes of hockey in a stretch of just under 48 hours from the Friday 7:00 p.m. weekend opener at Binghamton to the conclusion of the Sunday matinee in Atlantic City which wrapped up just before 6:00 p.m.

While historic Boardwalk Hall in Atlantic City serves as an alternative home venue for the Albany Devils, the crowd on hand was largely rooting for the Phantoms and Flyers. Albany out shot the Phantoms 37-32 in the game. Albany was 1-for-5 on the power play while the Phantoms went 0-for-3.