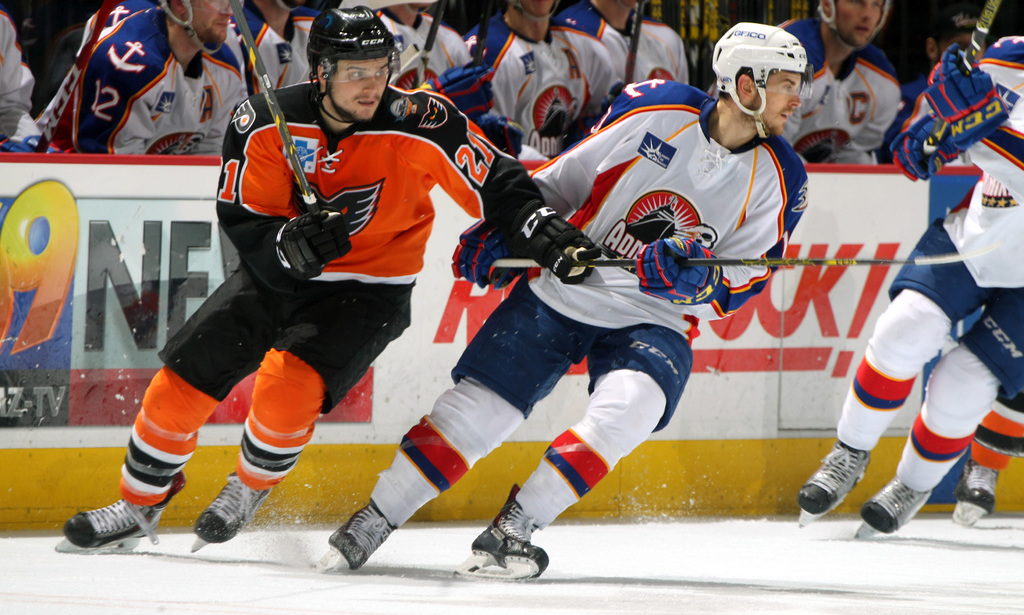 Norfolk, VA – In the last AHL game in Norfolk, Virginia the host Admirals prevailed in front of a sellout crowd on an emotional and bittersweet evening in a 4-2 decision over the Lehigh Valley Phantoms. The Admirals closed out their 15-year tenure in the American Hockey League with a packed-house sellout crowd of 8,701 at Scope Arena. The Anaheim Ducks are moving their AHL affiliate to San Diego next season while Norfolk will field a new team in the ECHL.

Nick Cousins (22nd) and Scott Laughton (14th) scored for Lehigh Valley. For Cousins, his goal ni the first period gave the Phantoms the initial lead and pulled him to within one of Jason Akeson in the down-to-the-wire goal scoring race on the team. Rob Zepp turned in a fine 40-save performance in keeping the Phantoms within striking dista 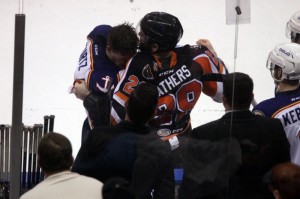 nce of the hosts.

The Lehigh Valley Phantoms were opening a three-in-three weekend to conclude their inaugural season. The Phantoms final games of the season will be Saturday night at the Hershey Bears and Sunday evening at home against the Wilkes-Barre/Scranton Penguins.

The game featured the return to the lineup of defenseman Matt Konan who made his season debut in the last weekend of the campaign. The southern California native had been out of action for the last 16 months due to concussion issues sustained in a game also at Norfolk on December 20, 2013. Konan had been skating on his own and then with the team for the past several weeks before finally receiving official clearance to play again early in the week.

After Cousins’ goal in the slot from a centering pass by Jesper Pettersson on the boards, Norfolk went to work. The Admirals would score the next three goals with Ty Loney (2nd), Dave Steckel (7th) and Stefan Noesen (7th) all lighting the lamp. Loney’s conversion at the end of the first period evened the score at 1-1. The veteran captain, Steckel, would convert on a power-play rebound in the slot early in the 2nd period to give the Admirals the lead at 2-1. And Noessen’s big blast later in the period came after a series of impressive rapid-fire man-advantage passes around the Phantoms zone to set up his right-circle slapper off the far post and in.

But with a power play of their own late in the second period, the Phantoms found the opportunity to try to strike back. And Scott Laughton succeeded with just 1:25 to go in the middle frame on a set up by Mark Alt and Brett Hextall. On an ensuing power play, Brett Hextall just missed on his drive in the slot set up by Andrew Gordon as the Phantoms were dangerously close to tying the count before the second break. 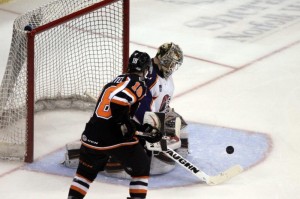 Norfolk rookie goalie Ryan Faragher held off the Phantoms long enough for Norfolk to extend their advantage to a pair yet again when Ducks’ first-round selection Shay Theodore poked one home from the right side of the net, again on the power play, after Max Friberg drove in from the left wing.

Norfolk went 3-for-5 on the power play while Lehigh Valley was 1-for-5. The Admirals out shot the Phantoms 44-25. Lehigh Valley finished 6-1-1 against the Norfolk Admirals this season. The Admirals won the final two games of the series after the Phantoms had prevailed in the first six. This was he first game this year between the two teams that was not decided by a single goal.

All told, the Phantoms played the Admirals a total of 122 times in 15 season since the Norfolk Admirals entered the league in 2000. The Phantoms record against Norfolk finishes at 58-55-9.

The Lehigh Valley Phantoms have just two games remaining in the regular season. Saturday the Phantoms will play their last away contest of the year visiting Hershey. The team’s season finale is on Sunday, April 19 and 5:05 hosting the Wilkes-Barre/Scranton Penguins at PPL Center.