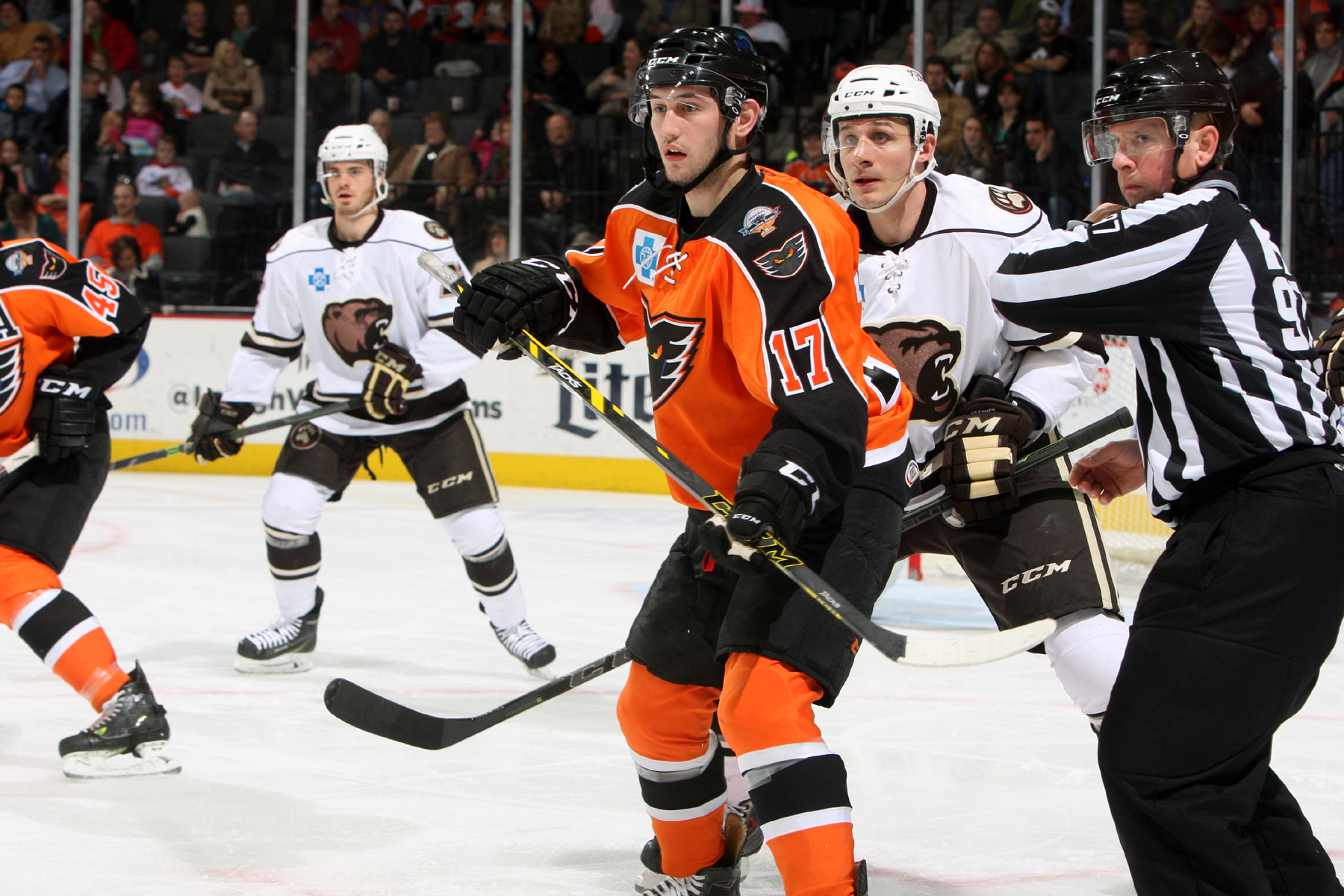 Hershey, PA – With tempers running high and misconduct penalties being doled out left and right, the Hershey Bears pulled away late in their season finale in a 5-1 victory over the Lehigh Valley Phantoms on Saturday night at Giant Center. In their last weekend of games of their inaugural season the Phantoms aren’t concluding their campaign quietly!

The night represented the final away game of the season for the Phantoms and their second-to-last game overall. Lehigh Valley concludes the regular season on Sunday at 5:05 hosting the Wilkes-Barre/Scranton Penguins. For the Hershey Bears, a sellout crowd jammed into their arena for their regular-season sendoff.

Anthony Stolarz pushed forth with a concerted effort in the face of a barrage of Hershey shots. The 21-year-old rookie goalie perhaps making his final appearance of the 2014-15 regular season turned away 19 out of 20 shots in the second period alone in keeping the Phantoms within striking distance. Stolarz finished with 39 saves on 44 shots. His second period effort included two robberies of highly touted winger Jakub Vrana as well as a pair of drives that connected with his helmet or mask. He also had to deal with colliding Hershey Bears players on a couple of occasions in the feisty affair.

Brett Hextall (6th) scored the lone tally on the night for Lehigh Valley on a shorthanded rush up the right-wing boards. His goal early of the left pad of rookie goalie Pheonix Copley in the second period which was assisted by Kevin Goumas pulled the Phantoms to within 2-1 at the time.

Hershey struck twice in the first period, once in the second and a couple more times in the third with goals recorded by Jon Landry (3rd), Tomas Kundratek (5th), Chandler Stephenson (7th), Philippe Cornet (9th) and newcomer Travis Boyd who scored his first professional goal in his second career game to cap the night.

Terry Murray was ejected from the game in the third period for arguing various calls with referee Garrett Rank. And Murray had earlier been the violator on a bench minor for disputing a decision after the second period had concluded. It was the first time in his three-year tenure as head coach of the Phantoms that Murray has been tossed from a game. Assistant coach Riley Cote assumed the reigns at the Phantoms bench for the first time in his five-year career as right-hand bench-man.

Two of the Hershey goals came on power plays that resulted from Phantoms’ issues with the officiating. Trailing only 3-1 at the end of two periods, Terry Murray earned what is believed to be his first unsportsmanlike conduct penalty of the season and Hershey capitalized just a few seconds into the third on the ensuing power play.

Later in the third period, Zack Stortini while appearing to be debating faceoff protocol was assessed a delay of game penalty that appeared to surprise him. And Hershey would convert on that power play as well.

The Phantoms fell just short of their efforts to even the series with the East Division champions finishing the season series with a 5-7 record against their rivals from ChocolateTown. The meeting was the 194th game all-time between the two long-time Pennsylvania rivals. Game #200 of the series will take place sometime in the 2015-16 season during the 20th year of the Phantoms franchise.

After the game, some members on each side wished each other well. Anthony Stolarz approached Pheonix Copley at center-ice in a meeting of rookie goalies for some kind words.

With 75 games down and just one to go, a number of team honors are still up for grabs. Jason Akeson leads Nick Cousins in a very tight race for most goals on the team by a slim count of 23-22. But Cousins leads Akeson in total points by a margin of 56-53. Jason Akeson has led the Phantoms in points for the last three seasons but unless he can overtake Cousins in the season’s final game, that streak will come to an end.

Most assists on the team is still relatively tight with Nick Cousins pacing the Phantoms with 34 closely followed by Jason Akeson with 32 and Brandon Manning with 30.

Two Lehigh Valley Phantoms players have successfully made it through the entire campaign without a day off. Both Zack Stortini and Andrew Gordon have participated in all 75 games thus far. Oliver Lauridsen has played in 74 out of the 75 games this year. He missed one game a couple weeks ago due to a quick call-up to Philadelphia when he played for the Flyers in the afternoon instead of for the Phantoms that night.

The Lehigh Valley Phantoms enter their final game of their inaugural season having drawn 301,510 fans to the spectacular, new PPL Center in downtown Allentown. The Phantoms have boasted 21 sellouts in 37 home games thus far with an opportunity for one more sellout against the rival Penguins on Sunday. Lehigh Valley is currently averaging an impressive 8,149 fans per game

A limited number of tickets for the final tilt of the season on Sunday at 5:05 are available now at pplcenter.com, by calling 610-347-TIXX (8499) or in-person at the Mealey’s Furniture Box Office at PPL Center (701 Hamilton).