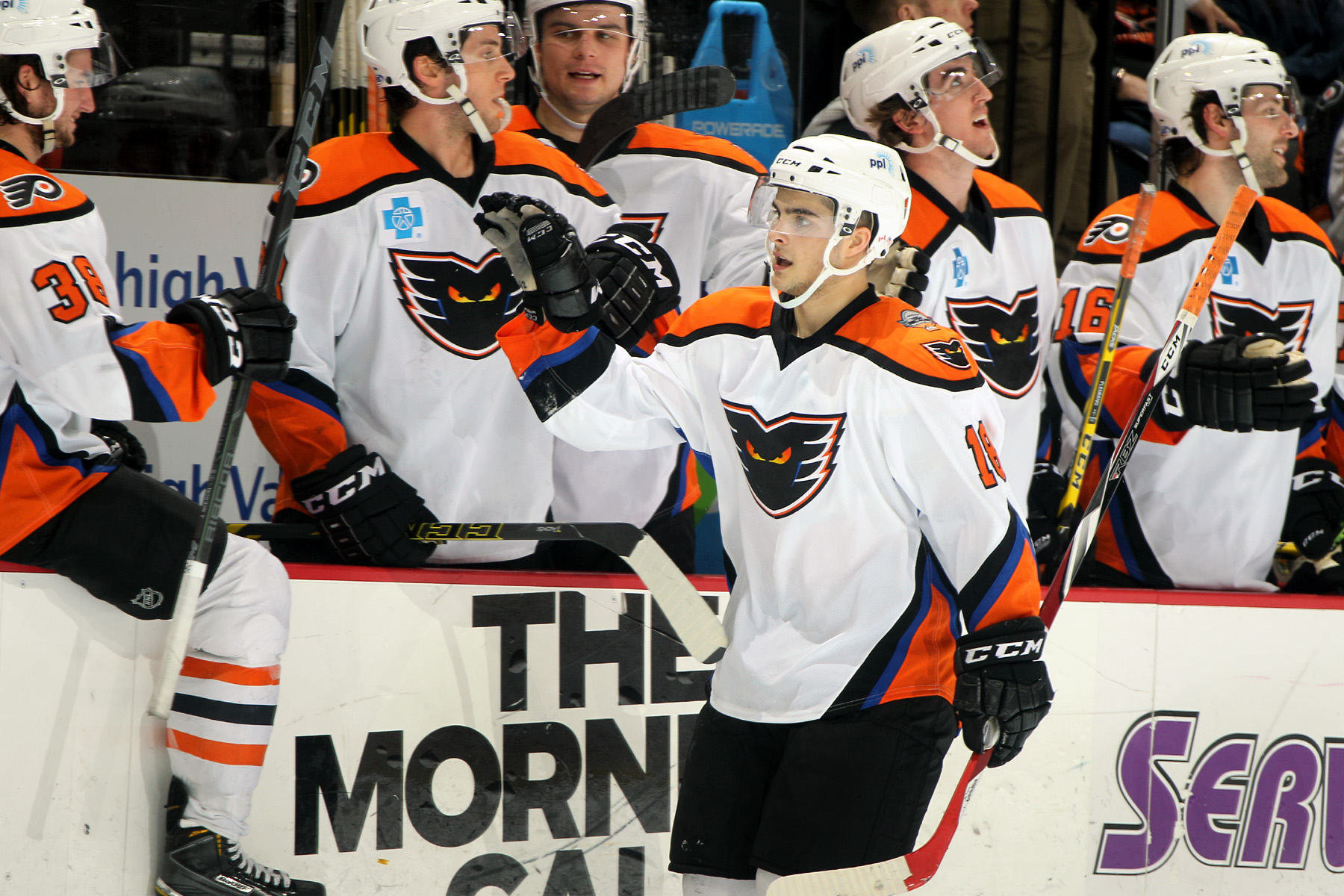 Lehigh Valley, PA – Four different Phantoms found the back of the net Tuesday evening and Rob Zepp registered 39 saves as Lehigh Valley opened the regular season’s final week with a 4-1 victory over the rival Hershey Bears in front of 7,679 fans at PPL Center. With the win, the Phantoms improved to 33-32-7-1 overall this season and closed the home portion of their season series with Hershey by claiming four of six tilts in downtown Allentown. 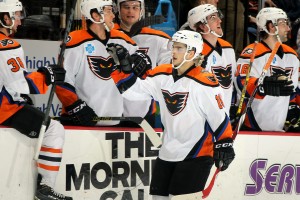 Scott Laughton, Petr Straka, Jason Akeson and Danick Martel all scored for the Phantoms Tuesday. Laughton’s goal was part of a multi-point effort as the blossoming 20-year-old center tallied a goal and an assist and has now produced six goals, five assists and 11 points over his last nine games. Meanwhile, Akeson also recorded a goal and an assist as he netted his team-leading 23rd goal of the season, which moved him into a tie with Paul Healey and Jon Matsumoto for fifth place on the franchise’s all-time list with 81 total goals. The 24-year-old winger is fourth in team history with 225 total points. Finally, Martel tallied his first professional goal in just his second professional game with an empty-net conversion capping the 4-1 triumph.

But Lehigh Valley’s balanced offense was only half of the story Tuesday evening. Zepp was spectacular in goal once again for the Phantoms as he turned aside 39 of Hershey’s 40 total shots on goal in earning his 21st win of the season. Making his 10th start over the Phantoms’ last 11 games, the 33-year-old netminder notched his seventh 30-save performance in his last eight starts. 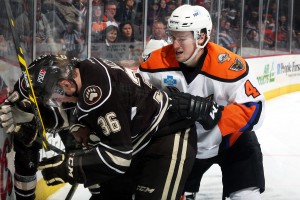 Zepp wasn’t alone in keeping the East Division’s top club to just a single goal though. After losing Steven Delisle to an upper-body injury midway through the game and without All-Star defenseman Brandon Manning for the third period due to back spasms, Lehigh Valley was limited to just four true blueliners for the game’s most critical frame and they answered the call with confidence. Mark Alt, Robert Hagg, Oliver Lauridsen and Jesper Pettersson dug deep as the club’s quartet of remaining defensemen and helped to keep the Bears off the board in the third period despite 13 shots on goal.

With better than 7,600 fans on hand for the 17th win inside PPL Center, Lehigh Valley became just the second team in the AHL this season to surpass 300,000 total fans for the 2014-2015 season. The Phantoms will skate in downtown Allentown for the final time as part of their inaugural season at PPL Center this Sunday, April 19th when they close the regular season with a 5:05 PM showdown against the Wilkes-Barre/Scranton Penguins.

With the win, the Phantoms moved to 5-6 this year against the Bears and will wrap up their 12-game regular season series this Saturday, April 18th at Giant Center in Hershey.

Hershey opened the scoring a little over four minutes into the contest when a takeaway below the Phantoms goal line produced an opportunity in the slot for Jim O’Brien who made no mistake in sending in his 10th goal of the season. Making his AHL debut, Jakub Vrana earned the primary assist while Dustin Gazley grabbed the secondary helper on the even-strength strike netted 4:14 into the opening frame.

Lehigh Valley leveled the contest early in the second period though as, just moments after the conclusion of the team’s first power play of the night, Alt fed a perfect pass from the right wing into the slot for Laughton who quickly snapped his 13th goal of the year under the crossbar and into the back of the Bears net. Akeson collected the secondary assist on the five-on-five conversion scored just 51 seconds into the middle frame. 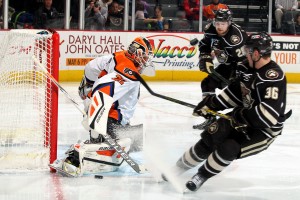 Zepp was particularly brilliant in the second period when he turned aside all 13 Hershey scoring opportunities, including an anxious sequence within the blue paint of the crease when Lehigh Valley’s netminder threw his glove on top off a loose puck just a split second before the Bears could swat it into the Phantoms cage.

Lehigh Valley then grabbed its first lead of the night less than seven minutes into the final period when outstanding patience and visition by Kevin Goumas on a wraparound resulted in a cross-ice feed for a wide-open Straka who was able to simply tap in his 14th goal of the season. The even-strength strike came 6:41 into the final frame and snapped a 17-game goal-scoring drought for Straka. Meanwhile, Goumas collected his second third-period point in as many games.

The Phantoms doubled their lead just over six minutes later when Akeson blasted in his 23rd goal of the year from atop the left circle. Taylor Leier and Laughton assisted on the five-on-five tally converted 12:44 into the third period.

Finally, Martel landed the game’s final strike with an empty-net marker from Oliver Lauridsen with just 55 seconds remaining in the contest.

The Bears out shot the Phantoms 40-29 overall as Hershey’s Philip Grubauer suffered the setback after 25 saves on 28 Lehigh Valley shots.

In one of their most disciplined outings of the season, the Phantoms committed just one minor penalty as Lehigh Valley’s penalty kill was able to kill the lone Bears power play on the night. The Phantoms have now surrendered just two man-advantage markers over the last eight home games going an impressive 24-for-26 during that stretch at PPL Center.

The Phantoms continue their busy week this Friday, April 17th and Saturday, April 18th with the team’s final two road games of the season. Lehigh Valley kicks off the weekend in Norfolk with the final showdown of the year with the Admirals before heading to Giant Center in Hershey on Saturday for the final rivalry showdown of the season between the Phantoms and Bears. Be sure to catch both road contests on Fox 1470 AM, online at www.fox1470.com or via the iHeartRadio app. Coverage begins with the Nazareth Pallet Countdown to Faceoff 45 minutes before puck drop.

The Phantoms then conclude the 2014-2015 regular season on Sunday, April 19th when they return to PPL Center for a 5:05 PM tilt with the Wilkes-Barre/Scranton Penguins. Sunday’s game features the Giant Canned Food Drive with all donations to be collected by the Volunteer Center and distributed to Second Harvest. Don’t miss your last chance to catch the Phantoms in their inaugural season of action in downtown Allentown.

A limited number of tickets for Sunday’s regular season finale are available now at pplcenter.com, by calling 610-347-TIXX (8499) or in-person at the Mealey’s Furniture Box Office at PPL Center (701 Hamilton).