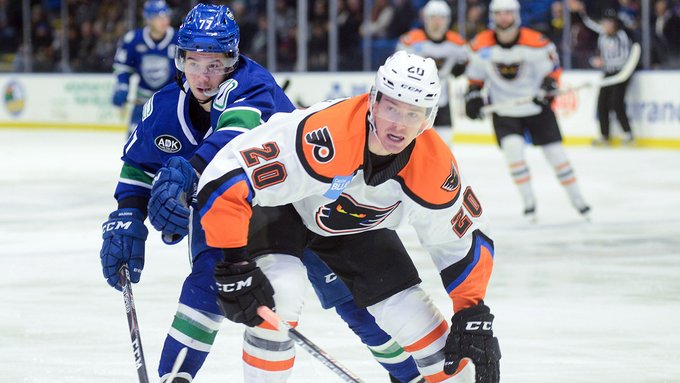 Utica, N.Y. – The Lehigh Valley Phantoms welcomed back several forwards to the lineup for the first time in a little while but the high-flying Utica Comets pushed through on the strength of a Justin Bailey hat trick for a 5-2 victory on Friday night. Connor Bunnaman (4th) and Misha Vorobyev (6th) tallied first-period goals for the Phantoms.

Bunnaman’s goal now extends his goal-streak to three games which is tied with Joel Farabee for the longest on the team this season. Vorobyev’s shorthanded marker was his second man-down tally of the campaign and came in his first game back with Lehigh Valley in over a month. Andy Andreoff was also appearing for the Phantoms for the first time in almost a month after his recent stint with Philadelphia. And another forward, Kyle Criscuolo, returned from injury to play his first game in almost a month as well.

Lehigh Valley (13-19-5) got behind the eight-ball early with former Phantom and Flyer Justin Bailey victimizing his ex-teammates for a pair of goals in the first 3:05. His first shot, on the power play, went off the left of Alex Lyon and his heavy offering still had enough to make it through. His second strike came on the back-door from the right of the cage after an interception by Nikolay Goldobin. J-F Berube came on in relief for the rest of the game. 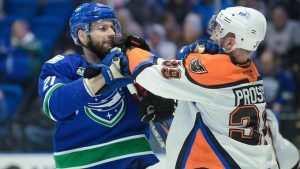 The Phantoms surged back with a couple of comeback goals. Connor Bunnaman scored after a shot by Chris Bigras from left point got through Comets netminder Michael DiPietro. Bunnaman was the first one to reach it in the blue paint and got yet another goal from down low at the net front. Less than five minutes in the game had already seen three goals and Utica’s lead was trimmed to 2-1.

But Utica (22-12-4) would extend the advantage later in the period on a goal from the left of the cage by Reid Boucher (22nd) on a rebound off the shoulder of Berube.

Lehigh Valley was quick to answer again, this time on the penalty kill. Vorobyev picked off a pass on the red line and cruised in solo on a shorthanded breakaway to backhand through the legs of DiPietro his second shortie of the season and the team’s fifth. The Phantoms trailed 3-2 and had some great chances late in the period with a couple of power plays including some time at 5-on-3. But the Comets hung on and kept the 3-2 lead into the intermission after a wild opening 20 minutes.

Utica struck in the opening seconds of the middle period on a conversion for Jonah Gadjovich (8th). And later in the frame, Justin Bailey would connect on his first career hat trick from the left dot on a one-timer after an interception in the Phantoms zone. That put the Comets up 5-2.

Lehigh Valley pushed in the third period including a play just 11 seconds in on a try for Maksim Sushko at the doorstep that he thought he had jabbed through DiPietro. But a potential early whistle may have doomed the Phantoms’ chances and video-review would not provide the goal call the Phantoms were looking for either.

Andy Andreoff had a close call at the doorstep. And Cal O’Reilly hit the post on the power play on a cross-ice feed from Morgan Frost. But Lehigh Valley couldn’t catch a break and could not break through on DiPietro in ultimately falling in the team’s road-trip finale.

Utica out shot the Phantoms 29-28. Lehigh Valley’s late push resulted in a 14-8 shot advantage in the game’s final period. Lehigh Valley was 0-for-4 on the power play while Utica was 1-for-5.

The Phantoms open a five-game homestand with contests Saturday night and Sunday afternoon against the Laval Rocket and Cleveland Monsters. Tickets for both games are available for $20 to ring in the New Year with the team’s first home games of 2020. Sunday’s game at 3:05 p.m. is Star Wars Day at PPL Center featuring many of your favorite Star Wars film characters appearing in the concourse and available for photographs and fun!