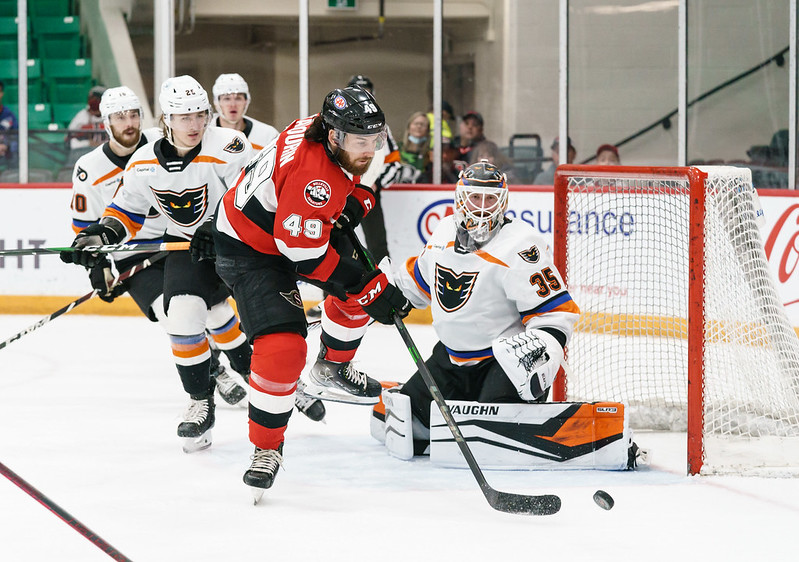 Belleville, ON – The Lehigh Valley Phantoms raced out to a 2-0 lead on goals by Garrett Wilson (13th) and Nick Lappin (4th) but the Senators found their game and eventually pushed through for a 3-2 win in a shootout on Saturday night at CAA Arena in Belleville, Ontario. Lehigh Valley secures a standings point with the regulation tie but was oh-so-close to taking the W on the road in the finale of the team’s six-game road-trip.

The Phantoms had a full power play at almost the very beginning of the overtime affording them a  glorious chance to walk away with the win. But Belleville’s penalty kill, rated tops in the Eastern Conference, limited the Phantoms’ chances and kept the game deadlocked. Wade Allison offered a big one-timer from the left circle on a pass slid across by Adam Clendening but big 6’7″ goaltender Mads Sogaard was there for the key stop in the extra period.

Pat Nagle was tremendous for the Phantoms as well with saves on 32 of 34 Belleville shots including some impressive denials in his first game back in the crease since his recent recall from Reading. Nagle also made four straight saves in the shootout but Cole Reinhardt finally broke the deadlock in the fifth round to propel the Senators to victory as Belleville improved to 5-0 in shootouts this year. 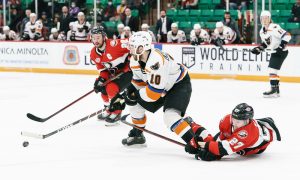 Lehigh Valley (22-27-11) equaled a season high with 20 shots on goal to open the game. They blasted away at Sogaard almost right from the start with nine shots in the first five minutes.

Eventually, Garrett Wilson broke through with a first-period power-play tally for the second consecutive game. Wilson was trying to slide the puck across to an open Charlie Gerard in the slot but a Belleville defender blocked the puck right back at Wilson who was now ready to pull the trigger and blast through the opening strike of the game and a 1-0 lead with 6:41 remaining in the first period. Tanner Laczynski set up Wilson from behind the goal and Egor Zamula’s pass from the blue line was also credited as an assist on the play.

Lehigh Valley’s 20 shots in the first period is tied for the most for the Phantoms this year which they initially accomplished on January 23 at Charlotte in the second period.

Logan Day’s blast off the post on the rush and Tanner Laczynski’s terrific dangle around a defenseman for a shorthanded try on goal were among the big chances for the Phantoms in the opening frame but they only carried the slim 1-0 lead into the room at the intermission.

The Phantoms continued some of that momentum into the second period. Wyatte Wylie won a puck on the right boards and found a wide open Ryan MacKinnon in the slot whose shot handcuffed Sogaard and was good for a point-blank rebound for Lappin and a 2-0 lead. The primary assist for MacKinnon was the first point of the season for the defenseman-turned-forward who had never played wing until called upon do so on January 5 in an emergency situation. 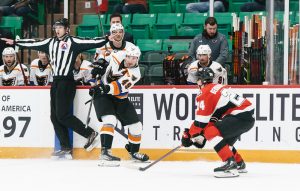 Jake Lucchini (17th) tied the game on a one-timer from the left dot on the power play on a set up from behind the goal by Zach Zenyshyn. His conversion with 3:56 remaining in the second period went to the upper-far corner of the cage just past the glove of Nagle.

Adam Johnson had a couple creative tries on net among other good chances for the Phantoms in the second period.

Belleville kept pushing in the third period but some key blocks and saves by Nagle kept the game deadlocked into the overtime where the Phantoms had the early power-play chance to end it but couldn’t find the right opening to fire at Sogaard.

A powerful lineup of Adam Clendening, Tanner Laczynski and Wade Allison were unable to break through against Sogaard in the shootout. Meanwhile, Nagle had big glove saves and poke-checks on some talented Belleville shooters including Luchini, Egor Sokolov and Senyshyn. But he could only hold them off for so long and Reinhardt finally drove one through after which Phantoms’ newcomer Brennan Menell was unable to respond with an equalizer.

Lehigh Valley finshed at 2-3-1 in its six-game road-trip. The Phantoms return to PPL Center for the first time in three weeks with a pair of games during the team’s Hockey Fiesta weekend when the Wilkes-Barre/Scranton Penguins visit on Friday, April 1 followed by the Utica Comets’ arrival on Saturday, April 2.