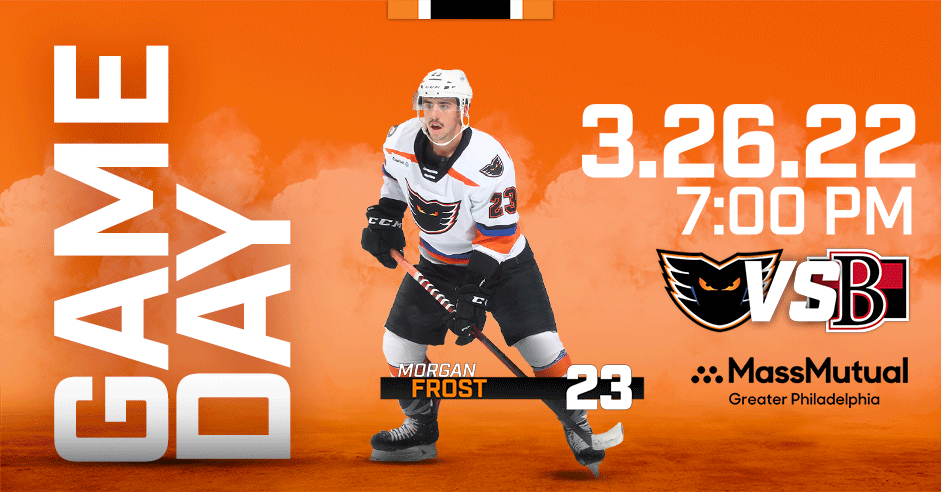 TONIGHT
It’s a GAMEDAY presented by MassMutual with the Lehigh Valley Phantoms finishing their six-game road-trip with a game in Belleville, Ontario againt the Senators.
Lehigh Valley (22-27-10) is playing game 60 of the season and there are 17 remaining including tonight.

LAST TIME
Captain Cal O’Reilly played in his milestone 1,000th pro game but the Phantoms lost at the Laval Rocket 5-1 on Friday night. Garrett Wilson (12th) scored on the power play in the first period on a goal assisted by Adam Johnson and newcomer Brennan Menell. Laval was led by a pair of goals from NHL veteran Cedric Paquette.
Ryan Fitzgerald made his belated season debut .He had been out for the entire season following hip surgery in September.
Menell made his Phantoms’ debut after coming over from the Toronto Marlies following a trade on Wednesday. Garrett McFadden also played in his first game for the Phantoms after previously playing with Reading in the ECHL. 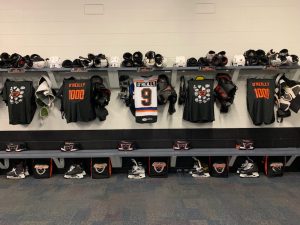 Mr. 1,000
The Phantoms honored their captain last night with a surprise array of “O’Reilly 1000” t-shirts that were hung in the dressing room in place of the jerseys. The shirts included the logos of all the teams that Cal had played for including the Phantoms, Iowa Wild, Rochester Americans, Utica Comets, Portland Pirates, Milwaukee Admirals, Wilkes-Barre/Scranton Penguins, Buffalo Sabres, Pittsburgh Penguins and more.
Cal O’Reilly was also sent out ahead of the team during pregame warm-ups to take a rookie lap.
Cal’s 1,000 games includes 809 contests in the AHL as well as 145 games in the NHL and 46 games in the KHL

HODGSON’S DEBUT
Congrats to Hayden Hodgson who became the second Lehigh Valley player to score a goal in his NHL debut with the Flyers. Morgan Frost was the first to do it two years ago. Hodgson began the year on an ECHL contract but his hard work earned him an AHL deal at the beginning of the season and eventually an NHL contract in March. Hodgson is tied with Cal O’Reilly for the team lead scoring 18 goals with the Phantoms.
Hodgson is the 36th Lehigh Valley Phantoms player to receive a recall for his NHL debut with the Flyers.
He also becomes the 24th player to score a goal in his Flyers’ debut joining a list that also includes Al Hill, Eric Lindros, Mike Richards, Justin Williams, Colin Forbes, David Laliberte, Harry Zolnierczyk, Jason Akeson and Morgan Frost.

BELLEVILLE SENATORS
Belleville (29-24-3) ranks sixth in the North Division but the standings are so cluttered they are actually only 1 point behind second place Laval while barerly trailing some other teams on points percentage. Filip Gustavsson had a 21-save shutout at PPL Center on February 5 in a 5-0 decision that is the largest margin of defeat for the Phantoms this year. Former Flyer Michael Del Zotto had one goal and two assists in that game.
Forward Zach Senyshyn has joined Belleville after he was traded to Ottawa by Boston earlier in the week. The former Bruins’ first-rounder has five goals against the Phantoms this year including a hat trick in a November game at Providence and then a two-goal game at PPL Center on March 2.
Former Wilkes-Barre/Scranton Penguin Jake Lucchini leads the team with 16-20-36. Phantoms’ alum Tyrell Goulbourne was traded by Belleville to Stockton.

PHANTASTIC!
– Cal O’Reilly has 18 goals this season to equal a personal high. The 35-year-old captain of the Phantoms also had 18 goals in a season 15 years ago in the 2006-07 season when he was a 20-year-old rookie with the Milwaukee Admirals. Cal has five goals in his last five games including a pair of two-goal games. Cal rates 30th all-time in AHL scoring with 675 points. He is 9th all-time in assists with 527.
– Wade Allison had a seven-game point streak from January 14 through March 23 scoring 7-5-12 in the stretch. He also had an unusual 4-game goal streak from January through March that included an almost two-month hiatus due to injury. He had goals in six of the seven games including a four-point performance last Saturday at Springfield which is the most for any Phantom in a game this season.