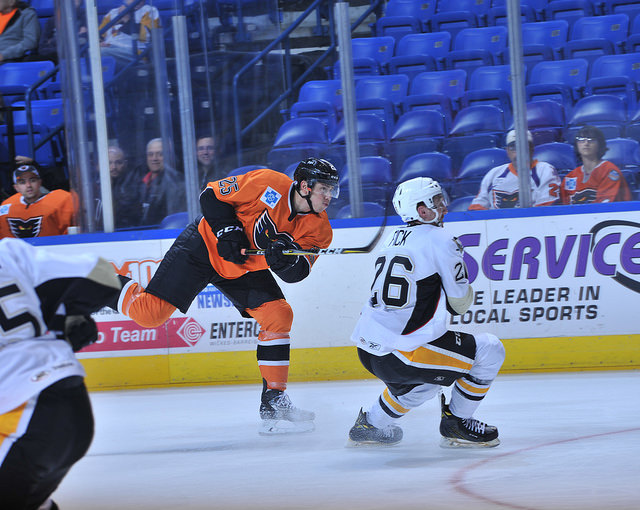 Wilkes-Barre, Pa. – The Lehigh Valley Phantoms fought their way back from a 2-0 deficit but host Wilkes-Barre/Scranton shortly thereafter pushed through for a 3-2 decision in the preseason opener for both Pennsylvania rivals. Philippe Myers and Cole Bardreau each had power-play strikes for the visiting Phantoms who will return to PPL Center on Friday and Saturday with home engagements against the Charlotte Checkers.

Reigning AHL MVP (Les Cunningham Award) Phil Varone notched a pair of assists while newcomer David Kase included a helper of his own. Goaltender Branden Komm went the distance for the Phantoms with 26 saves while former Phantom John Muse notched the win against his ex-teammates on a 27-save performance.

Rookie Winger Connor Bunnaman unloads a shot in Thursday’s preseason game at Wilkes-Barre.Russian rookie center German Rubtsov hit the post from the right of the cage in the third period on what he initially thought may have been an equalizing goal. Rubtsov briefly raised his hands in celebration but the shot off the post was determined to be no goal and play continued. Later, the talented 20-year-old first rounder forced a turnover in the Penguins’ zone and spotted an open Kase on the backdoor who was denied on a sprawling, spectacular save by Muse diving to his right on what was likely his best stop of the night.

Lehigh Valley had two full minutes of 6-on-4 in the latter stages of the game on a power play and a pulled goalie but the Penguins and Muse were successful in holding tough. 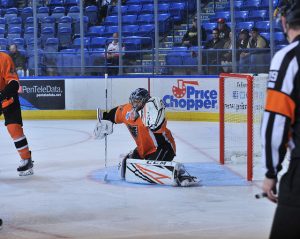 Preseason games can be about pushing through some of the occasionally sloppier play as the new players begin to find their chemistry. Phantoms head coach Scott Gordon liked what he saw in the team’s effort-level and the beginning attempts to figure out the team’s system after only a handful of practices together.

“A lot of positives” Gordon said, “I thought our guys did a lot of the stuff that we worked on in practice which was good to see. The areas that we were off we weren’t off by much. Lot of opportunities…three posts. It was a good effort.”

Matthew Abt and Linus Olund struck for the opening markers in the first period for the Penguins with tallies just 39 seconds apart against Komm. Abt’s wrister from the top of the right circle came shortly after Myers had somehow crashed out behind the goal in a collision with the referee. The shot was pushed to the far post and past the blocker of Komm for the game’s initial strike at 13:38.

Then it was Sam Miletic offering a shot from the left wing that Komm left in the slot for a speedy, onrushing Linus Olund to chip through for a 2-0 advantage.

The Phantoms responded in the second period with a rapid recovery on their first power play of the game. It only took four seconds on the man advantage for Phil Varone’s faceoff win over to Kase to be slid back to Myers on the right who offered a top-shelf slapper over the glove of Muse. The goal in the early moments of the second period pulled the Phantoms back into the game at a 2-1 deficit.

Lehigh Valley’s next power play would take a little longer to find the back of the net but was equally successful all the same. At 16:15 into the second period, Phil Varone from the left boards spotted Cole Bardreau behind the goal who set up Greg Carey’s one-timer from the left circle off the chest of Muse. Before the carom landed on the ice, Bardreau was able to spot the puck in mid-air and, from behind and to the side of the net, was able to touch it in practically off the right knee of Muse. The “absolute play-maker” Bardreau had evened the score at 2-2.

Bardreau is currently the longest tenured of the Phantoms players having joined the team late in the inaugural season. The popular and hard-working winger was ready for actual games.

“First and foremost it’s just good to get back in that game speed and get out there with the guys,” Bardreau said. “Everyone’s been antsy through the hard practices through the camp up with the Flyers and then leading into here. Obviously a lot to get better at there. But like I said kind of take the positives you know getting back into game shape kind of getting the systems down a little bit and move along.”

Shortly after Bardreau’s tying goal the Phantoms were assessed a pair of penalties providing Wilkes-Barre/Scranton a monumental 5-on-3 for 120 seconds that would only require 10 ticks for the go-ahead mark. Miletic on the back-door from the right of the cage successfully scored past the desperate, diving efforts of Komm for the 3-2 lead. 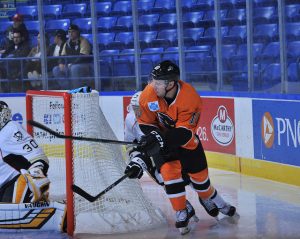 Earlier in the second period came other glorious scoring chances on breakaways for Chris Conner and Radel Fazleev. Conner’s try was repelled by Muse but quickly jumped on by the trailing Kase who almost scored as well. Fazleev’s breakaway was completely in the clear following a blocked and deflected passing attempt plus he had two quick cracks at the veteran goaltender but Muse found a way to keep the puck out.

Shots on goal finished even at 29-29. Lehigh Valley was 2-for-4 on the power play while Wilkes-Barre/Scranton finished at 1-for-3.

The Phantoms host a pair of preseason games at PPL Center on Friday and Saturday nights against the Charlotte Checkers.