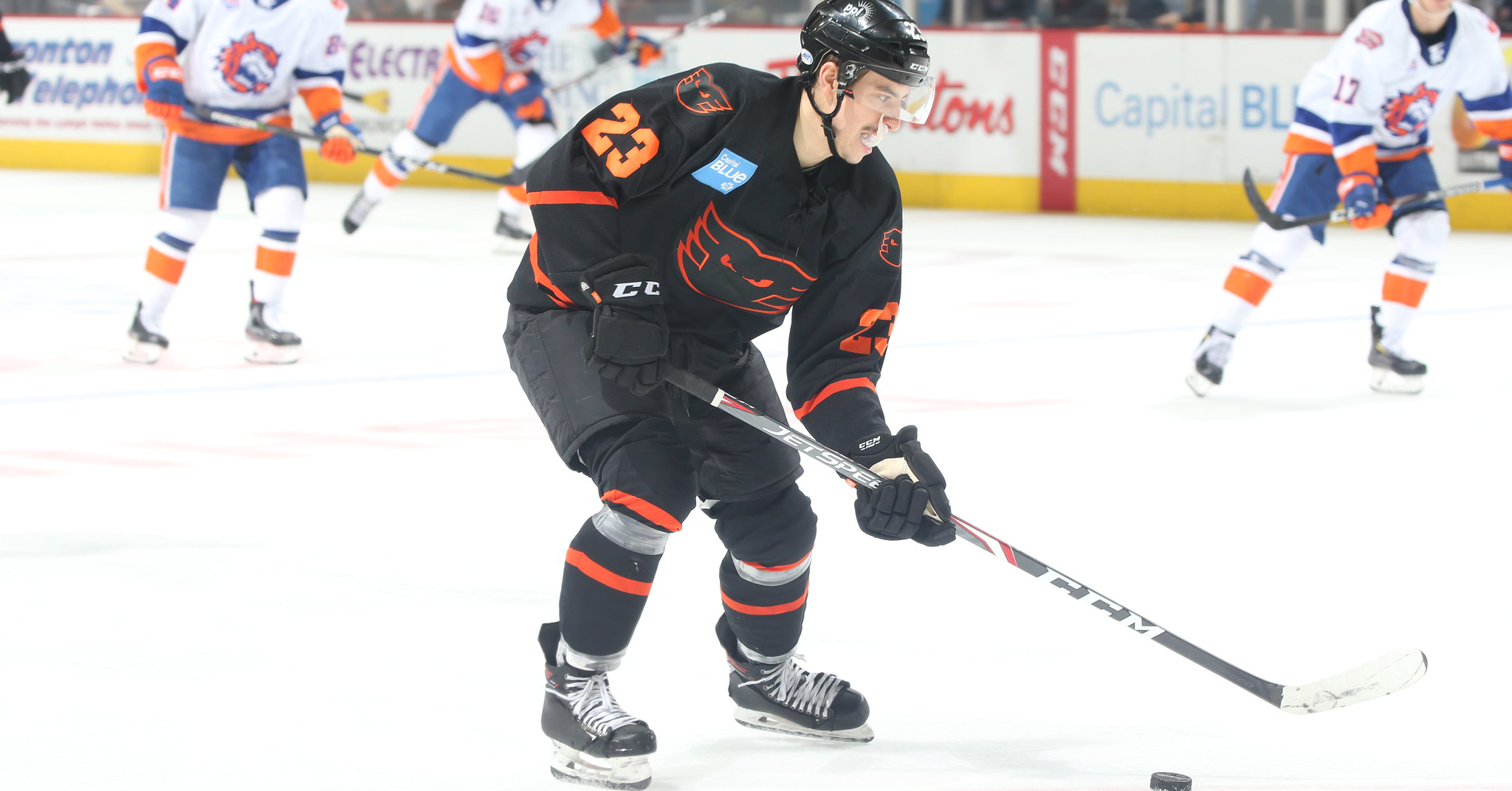 Phantoms Tie Game Late in the Third But Fall 6-4

Lehigh Valley, Pa. – After six days off, the Lehigh Valley Phantoms (24-27-2-6) played in their first of six games over the next nine days as they took on the Bridgeport Sound Tigers (21-32-5-2) on Friday night. Morgan Frost scored two goals and tacked on an assist, and Andy Andreoff and Carsen Twarynski also lit the lamp but the Phantoms fell to Bridgeport by a score of 6-4.

It took less than two minutes for the Phantoms to open up the scoring with a power-play goal. After a shot was deflected away by Bridgeport goalie Christopher Gibson, Greg Carey recovered the puck and passed it out to Chris Bigras at the top of the zone. Bigras passed it over to Morgan Frost in the right circle, who ripped a shot that went in for his twelfth AHL goal of the season.

Just a few minutes later, the Sound Tigers tied it up with a goal from former Phantoms captain, Colin McDonald. Seth Helgeson took the initial shot, and McDonald knocked in the deflection past Kirill Ustimenko to make it a 1-1 game. Oliver Walstrom gave Bridgeport a 2-1 one lead with 12 minutes left in the period. He gathered a centering pass from Parker Wotherspoon (younger brother of Phantoms defenseman Tyler Wotherspoon) and wristed it in for the goal.

With less than a minute to go in the first period, Morgan Frost scored his second goal of the game to tie it up at 2-2. Frost stole the puck away in the offensive zone when Bridgeport attempted to clear out the puck, and shot it from inside the slot for the unassisted goal. It was the rookie forward’s second two-goal game of the season.

Bridgeport responded 16 seconds later to regain the lead with a goal from Nic Pierog. Pierog’s unassisted goal came from a shot from the left circle that bounced off of Ustimenko and into the net.

Kieffer Bellows extended Brideport’s lead to two goals with six minutes left in the second period. Sebastian Aho sent a pass to Bellows in the right circle, who sniped a one-timer past Ustimenko to make it 4-2. 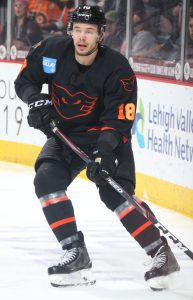 Carsen Twarynksi brought the Phantoms within one with less than two minutes to go in the second period. The play got started by Kurtis Gabriel, who beat out an icing, and pushed the puck along to Connnor Bunnaman at the goal line. Bunnaman fed it out to Twarynski, who shot it past Gibson for the goal. It was his sixth goal of the season and third in just two games against Bridgeport.

With 9:48 left in the game, Andy Andreoff found himself in the right place at the right time, as a puck deflected in off his skate to tie the game at four. Morgan Frost took the initial shot, which hit off Andreoff’s skate and into the net. The play was reviewed and determined to be a good goal. Andreoff now has goals in three-straight games and 11 on the season.

Bridgeport once again quickly regained the lead, as Kieffer Bellows scored his second goal of the game with less than eight minutes remaining. Ustimenko knocked away a shot, and Bellows gathered the rebound and poked it in giving Bridgeport a 5-4 lead. The Sound Tigers tacked on an empty-netter from Robert Carpenter to make it 6-4, which ended up becoming the final score of the game.

NEXT TIME OUT: The Phantoms will travel to Binghamton to take on the Devils for a 4:05 game, before returning to face Bridgeport again on Sunday afternoon at 3:05 at the PPL Center to wrap up the 3-in-3 weekend.