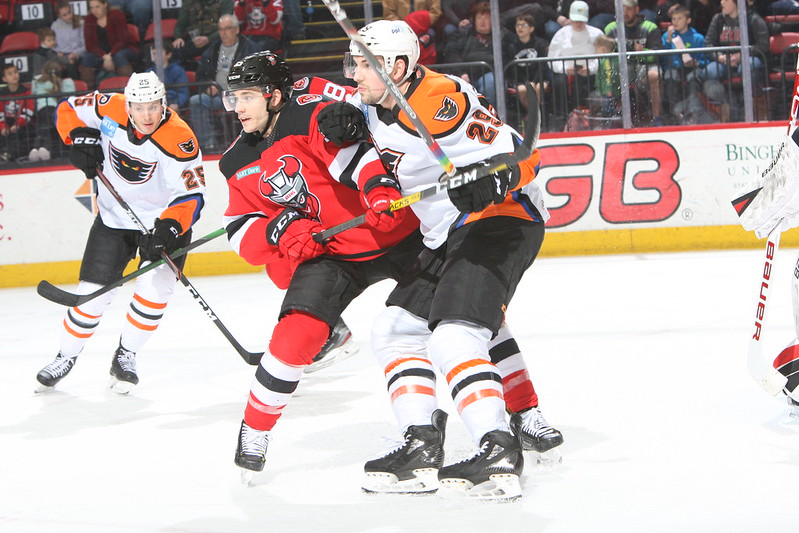 Binghamton, N.Y. – New Binghamton goalie Zane McIntyre turned side all but one of Lehigh Valley’s 35 shots on goal in a 5-1 victory for the Devils on Saturday afternoon.

Carsen Twarynski (7th) broke McIntyre’s shutout bid with 8:29 remaining in the third converting on a breakaway. Otherwise, McIntyre was simply too good in his home debut with his new team in southern New York. 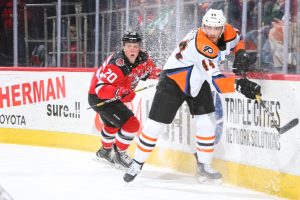 Twarynski has been one of the top scorers for Lehigh Valley (24-28-8) of late with five goals in his last seven games shortly after the second-year winger had returned to the lineup following a six-week absence to injury. The game also saw Andy Andreoff’s three-game goal streak come to an end.

Mikhail Maltsev (11th) and Ryan Schmelzer (7th) each registered a goal and an assist for the Binghamton attack which featured a pair of power-play conversions as well as two shorthanded markers.

Binghamton (32-24-4) opened the scoring late in the first period on an intercept by Maltsev setting up rookie Fabian Zetterlund (6th) in the right slot at 16:29 into the game.

The first period ended with a significant scrum along the boards with several individual engagements as the chippy play of the evening intensified. 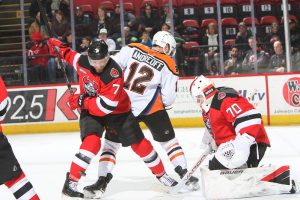 The Devils scored a pair of goals in the second period with Egor Sharangovich (8th) taking the shorthanded shot himself on a 2-on-1 rush to beat Alex Lyon on the blocker side. Ryan Schmelzer (7th) scored late in the period after a power-play shot by Julian Melchiori got in behind Lyon for the follow-up.

Mikhail Maltsev (11th) scored on the doorstep for another strike on the man advantage in the early minutes of the third period after Lyon made an strong initial denial if the re-direct try with the right pad for a 4-0 lead.

Mark Friedman fired a long stretch pass right on the money for Twarynski who zoomed in for his breakaway marker to get the Phantoms on the board at 4-1.

Nathan Bastian (15th) rushed in for a quick intercept in the closing minutes to finish the scoring with an empty-netter after the Phantoms had pulled their goalie while on the power play for a 6-on-4 attack.

McIntyre held the Phantoms out in a couple of big flurries in the third period including tries for Reece Willcox and Greg Carey. His best stop came late in the game on a backdoor try by David Kase that saw McIntyre somehow scramble over with his left pad.

Lehigh Valley out shot Binghamton 35-34. The Devils were 2-for-4 on the power play while the Phantoms were 0-for-4 with two shorthanded goals allowed. 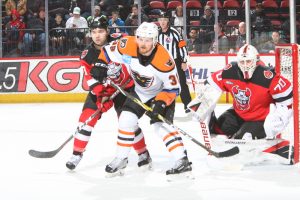 The Phantoms return to PPL Center on Sunday afternoon at 3:05 p.m. for the team’s highly anticipated 100th sellout all-time at PPL Center. Sunday also marks the team’s Youth Jersey Day for the first 2,000 kids age 14 and younger presented by PALCS. Fans arriving to the game should be mindful of the upcoming Daylight Savings.

NEXT TIME OUT: The Phantoms return to PPL Center to face Bridgeport on Sunday afternoon at 3:05 at the PPL Center to wrap up the 3-in-3 weekend.