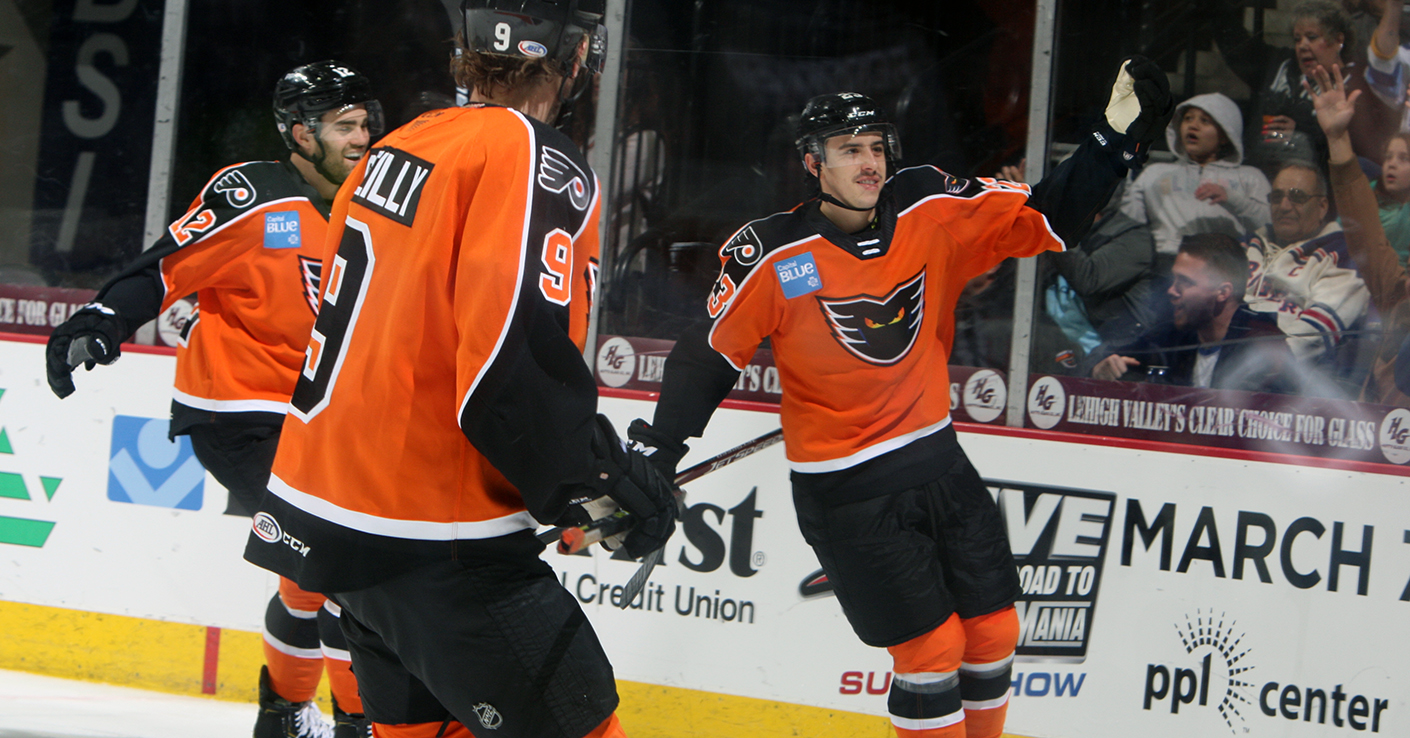 Lehigh Valley, Pa. – The Lehigh Valley Phantoms (16-19-1-4) extended their winning streak to a season-high three games on Wednesday night, defeating the Syracuse Crunch (18-17-2-2) by a score of 5-4. Morgan Frost led the way for the Phantoms with two goals in the victory and Maksim Sushko, Max Willman and Greg Carey also lit the lamp for the Phantoms who posted five goals for the first time since November 29. J-F Berube made 23 saves to earn his seventh win of the season. 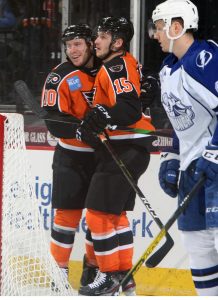 In contrast to their previous two games, the Phantoms offense had a strong start to the game, jumping out to a 1-0 lead at the 3:15 mark in the first period with a goal from Maksim Sushko. After taking a pass from Eric Knodel, Sushko skated through the neutral zone and into the offensive zone and sniped a wrist shot from the left circle for his seventh goal of the season.

Syracuse tied the game three minutes later when Ross Colton put a shot over J-F Berube’s shoulder, but the game would not be tied for long, as Morgan Frost responded with a goal of his own. Pascal Laberge’s kept the puck in the zone and turned and fired a shot that bounced off Syracuse goalie Spencer Martin’s pad, and Frost was right there to collect the rebound and net his seventh AHL goal this season to regain the Phantoms lead.

The Crunch once again tied the game just nine seconds later. After securing possession off the faceoff, Alex Barre-Boulet passed the puck across the slot to Boris Katchouk, who was able to get the shot under Berube’s arm for the goal to tie the game 2-2.

In his return to the PPL Center, former Phantom Danick Martel scored his 13th goal of the season to open up the second period and give Syracuse its first lead of the game. Martel played with Lehigh Valley for four seasons from 2015 to 2019, and received a video tribute on the big screen during the game and a standing ovation from the Lehigh Valley fans. 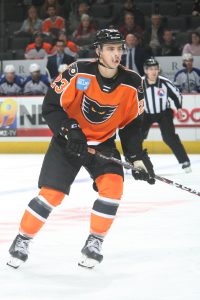 Max Willman picked a great time for his first AHL goal, as he was able to tie the game for the Phantoms with just 1:22 remaining in the second period. Willman corralled a loose puck and attempted to bring it to the front of the net but the Syracuse netminder was able to get a stick on it to poke it away. Willman stayed with it and regained possession just in time to spin around and fire it over Spencer Martin while skating backwards for his first tally in his eighth AHL contest.

Lehigh Valley took back the lead for the third time with a power-play goal at the 3:19 mark in the third period. Morgan Frost took the puck in the defensive zone and picked up speed as he flew threw the neutral zone and cross the blue line. Frost was able to split two defenders in the slot to fire one past Martin for the second goal of the night for the AHL All-Star. Goalie J-F Berube tallied his second assist of the season on the play, and Knodel picked up his second of the night.

The Phantoms netted the dagger at the 15:52 mark, as leading scorer Greg Carey ended his goal drought with his first tally since December 22. Carey’s tenth goal of this season was the second power-play goal for the Phantoms tonight. The assist came from Chris Bigras, his second of the game.

Syracuse made a push late in the game, scoring a goal with an extra attacker on the ice, but the Phantoms were able to hold off the Crunch and secure their season-best third straight win. Lehigh Valley out shot Syracuse 33-27 and J-F Berube made 23 saves in his second consecutive victory.

NEXT TIME OUT: The Phantoms will return to action for the first game of Racing Weekend on Friday night against the Binghamton Devils (17-17-4-0). Lehigh Valley is 1-1 against Binghamton this season, most recently losing 3-1 on the road. The Phantoms won the first matchup at PPL Center by a score of 4-1.