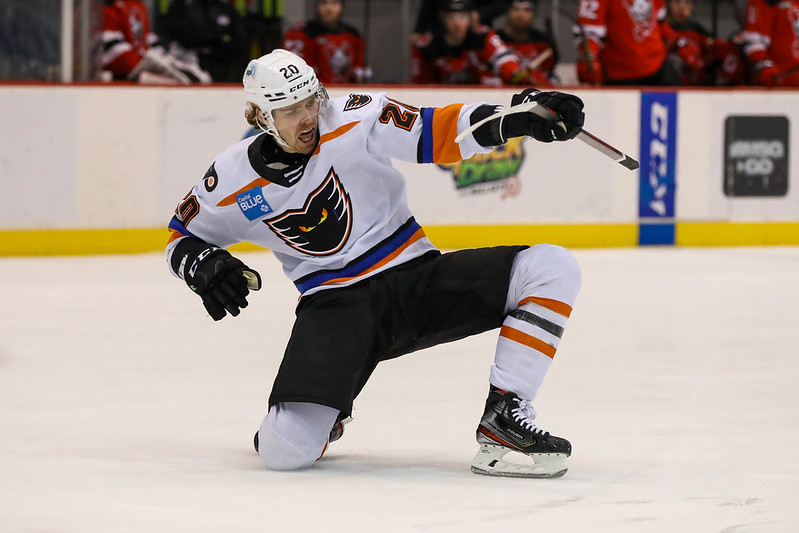 Newark, NJ – Max Willman (2nd, 3rd) scored a pair of goals including the overtime winner in an exciting 5-4 victory at the Binghamton Devils in Newark, NJ on Wednesday night. Linus Sandin (1st), Ryan Fitzgerald (2nd) and Pascal Laberge (1st) also recorded markers in the third overtime victory in four extra-hockey games of the season for the Phantoms. All four away games the Phantoms have played this season have gone to overtime.

Lehigh Valley (4-0-1) tied a franchise record with points in five consecutive games to start a season first accomplished by the Philadelphia Phantoms who were 5-0-0 at the beginning of the 2007-08 season.

Willman scored on a quick breakaway after a win along the left boards by Derrick Pouliot on a goal also assisted by David Kase for the winner at 4:18 of overtime that came about a minute after Kase was denied point-blank on consecutive chances by Devils goalie Evan Cormier. 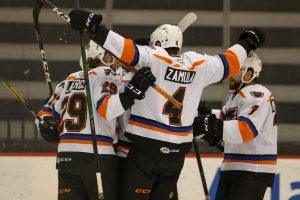 Willman had just scored his first of the year on Saturday night in the home opener after he had been a little snakebit in the previous three games with several posts and close-calls but the Barnstable, Mass. product has since figured out how to bury his chances. He also scored in the first period for a 2-1 lead on a quick wrist shot from the right circle.

Pascal Laberge scored at the net-front barely more than two minutes into the game poking through a centering pass that came from behind the goal for his first of the season.

Fabian Zetterlund equalized a few minutes later and then the Phantoms took over for much of the remainder of the period including goals less than a minute apart by Willman from Tanner Laczynski and Garrett Wilson at 11:42 and then Ryan Fitzgerald 58 seconds later on a deflection of a shot/pass by Linus Hogberg also assisted by Linus Sandin. Fitzgerald’s goal came against his Dad’s team and organization; Tom Fitzgerald is General Manager of the New Jersey Devils.

The Phantoms enjoyed a 3-1 lead at the first break but the Devils would surge back with three straight to take control. Nick Merkley jammed through a free puck at 1:08 into the second period with just three seconds remaining on the power play for the first goal the Phantoms had allowed on the man-advantage this season. A couple minutes later, Danick Martel would victimize his former team finishing a 2-on-0 shorthanded rush with a shot on the backdoor that appeared to initially be spectacularly saved off the left pad of Zane McIntyre before ultimately dribbling across the line to even the score. 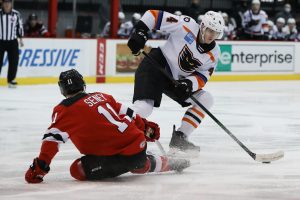 Nate Schnarr got to a rebound after McIntyre had made a sprawling save on a cutting Cam Darcy in the opening minutes of the third period for the Devils to take their first lead of the night at 4-3. But Linus Sandin scored his first in North America on a couple rebound efforts of a Derrick Pouliot slapper to tie the game midway through the third setting up the overtime heroics for Willman.

Ryan Fitzgerald, David Kase and now Max Willman have all scored overtime winning goal for the Phantoms in just the third five total games of the season. Lehigh Valley has rallied from a third-period deficit in each of their overtime wins.

Next up for the Phantoms is a road game at the Wilkes-Barre/Scranton Penguins on Friday at 5:00 p.m. followed by a rematch at PPL Center on Saturday at 7:05 p.m. also against the Penguins.