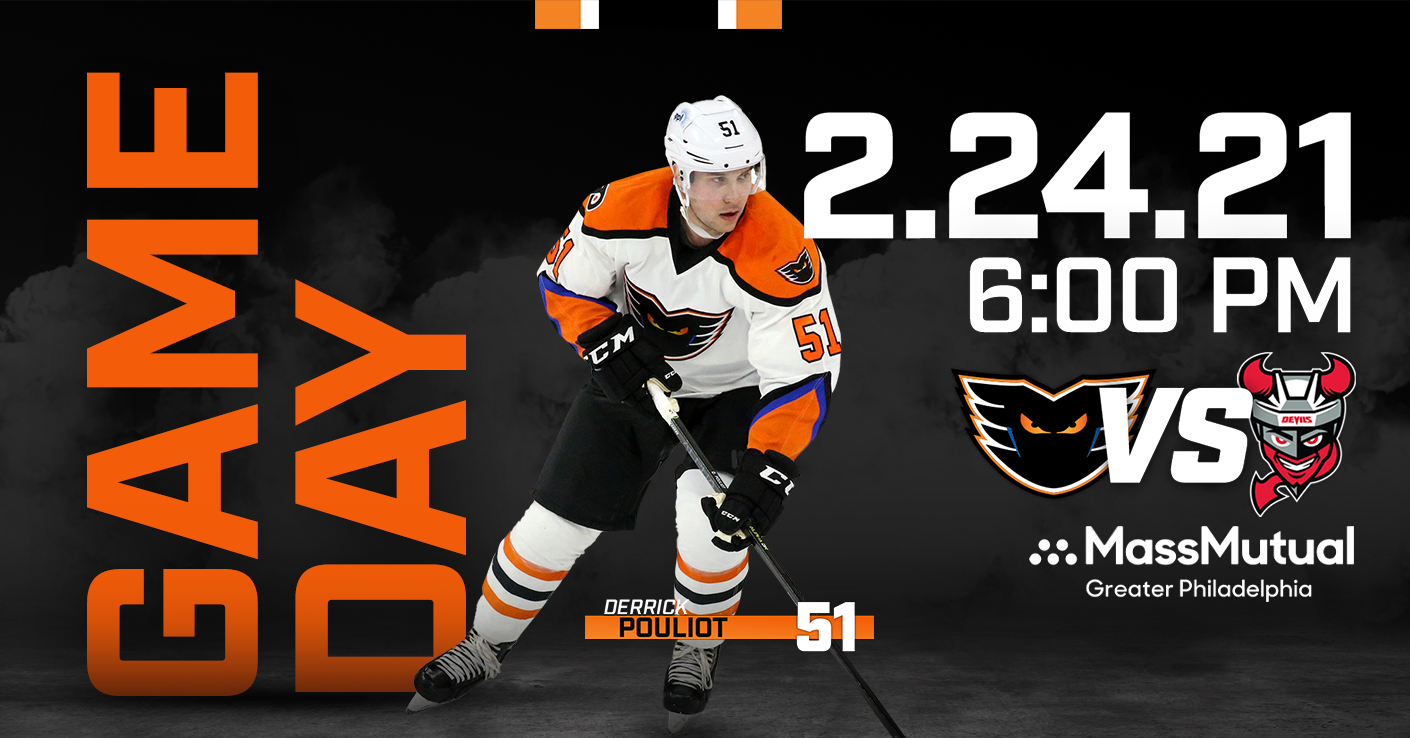 Today’s Game – The Lehigh Valley Phantoms travel to Newark, NJ for the second time this year to take on the Binghamton Devils at the RWJBaranbas Health Hockey House attached to Prudential Center. It is Game 3 of 14 in the season-rivalry series with the Phantoms holding a 1-0-1 advantage thus far. Tonight is the fifth game of the 2021 regular season and the fourth away game this year. It is the rescheduled date of a postponement from February 19.

Last Time Out – Zayde Wisdom scored a pair of goals for the season consecutive game and Zane McIntyre repelled 25 Devil’s shots in a 3-0 win on Opening Night at PPL Center in the first Phantoms home game in 346 days. Max Willman also scored a goal while Cal O’Reilly and Ryan Fitzgerald landed two assists apiece. Lehigh Valley improved to 5-2 in home openers at PPL Center and the Phantoms franchise surged to 18-6-1 in home debuts beginning with the first home game by the Philadelphia Phantoms in 1996 defeating the Rochester Americans 3-1.

Words to the Wisdom – The youngest player in Phantoms franchise history is showing tremendous ability and wisdom beyond his years in his first-ever professional games. Zayde Wisdom has scored two goals in each of the last two games to lead the Phantoms in scoring with four goals and one assist in four games. The fourth-round selection of the Flyers from the Kingston Frontenacs on the OHL became the youngest player in franchise history when he debuted on February 6 at 18 years, 6 months and 30 days old beating the record by just 20 days previously held by Derek Mathers of the Adirondack Phantoms. Wisdom would normally be playing in the Ontario Hockey League currently but while that circuit remains on hiatus the contracted players are allowed to gain experience…and wisdom…with games in the professional ranks.

McIntyre Blank Sheet – Zane McIntyre recorded his 14th career shutout last Saturday in a 3-0 win against his former team. McIntyre ended last season with Binghamton after a trade brought him over from Utica. He went 4-0-0 for the Devils with two shutouts before the rest of the season was cancelled. The former Mike Richter Award winner at the University of North Dakota has gone 3-0-1, 1.73, .942 with the Phantoms and has played every minute in net so far this season. He began the season with a brilliant 34-save performance at Hershey on February 6 in the Phantoms’ comeback 2-1 overtime win.

Killin’ It! – The Phantoms have thrived on the penalty kill this season going a perfect 12-for-12 in the opening four games which also scoring one goal shorthanded (David Kase). The Phantoms are one of just three teams that have not allowed a power-play goal this season. Head coach Scott Gordon has noted that Lehigh Valley’s penalty kill has struggled in the opening weeks of the season before finding its stride typically around the 15-game mark and said he has adjusted for that by putting in extra work on the team’s P.K. structure in training camp and early-season practices.

Moving Up – Forwards David Kase and Maksim Sushko were recalled by the Philadelphia Flyers and played in last Thursday’s game against the New York Rangers. For Sushko, his NHL debut represented the 14th Belarusian to play in the NHL and the 27th Lehigh Valley player to develop into an NHL player with the Flyers. Kase was making his season debut with the Flyers after playing six NHL games last year with one goal. Additionally, forward Matt Strome was recalled to the Flyers taxi squad.

Welcome Back – Four players were loaned to Lehigh Valley from the Philadelphia Flyers on Monday; David Kase, Derek Pouliot, Felix Sandstrom and Matt Strome. This helps boost a team that had been running a little short on extra players. Kase played for the Flyers last Thursday against the New York Rangers. Pouliot, Sandstrome and Strome have all spent varying amounts of time on the Flyers taxi squad but have not gotten into games with Philadelphia. Pouliot has not played since the Phantoms season-opener on February 6 and Sandstrom has not played since his shutout of Wilkes-Barre/Scranton in the preseason game on February 4.

Hot Start – The Phantoms four-game point streak to begin the season equals the second-longest in franchise history and the longest since the 2007-08 season when the Philadelphia Phantoms began at 5-0-0. It is the first time ever for Lehigh Valley to record points in its first four games.

Scouting the Devils  – The Devils have dropped back-to-back regulation decisions after beginning the season on a three-game point streak at 2-0-1. Binghamton has suffered a power-outage in its last two games with only one goal in the past 120 minutes including a 2-1 loss against Hershey last week and a 3-0 loss in Allentown on Saturday.

Veteran center Ben Street leads the Devils with two goals and two assists for points. Street has played in over 500 AHL games since breaking in with the Wilkes-Barre/Scranton Penguins a decade ago. Lightning first-rounder Nolan Foote also has four points on one goal and three assists. He is the brother of Tampa Bay first-rounder Cal Foote and the son of former Colorado Avalanche great Adam Foote. He came from the Lightning organization to the Devils in a deal involving Blake Coleman. Danick Martel is one of the most popular players in Lehigh Valley Phantoms history and is now wearing #62 for the Devils. Martel has one goal and one assist this season. The two-time Phantoms “Man of the Year” for his work in the community played 199 games in a Lehigh Valley sweater and rates third in team-history with 68 goals.

Upcoming – The Phantoms play this Friday at 5:00 p.m. at the Wilkes-Barre/Scranton Penguins in the first of ten meetings between the two Pennsylvania rivals. The Phantoms return to PPL Center on Saturday night at 7:05 p.m. for a rematch against the Penguins.