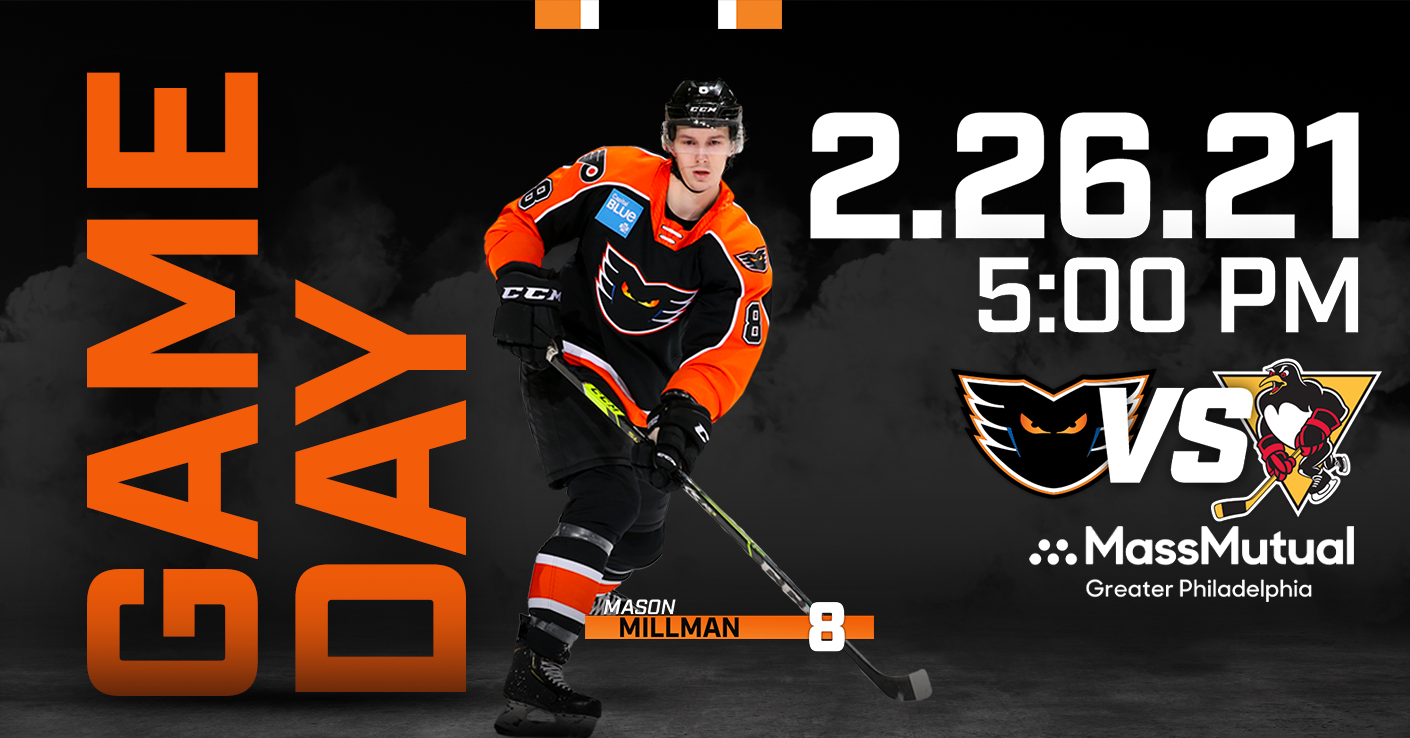 Today’s Game – The Lehigh Valley Phantoms head to northeast Pennsylvania for a rivalry showdown game against the Wilkes-Barre/Scranton Penguins in the opener of a home-and-home weekend set. It is Game 1 of 10 in the season-rivalry series and Game 6 overall this season.

Last Time Out – Max Willman scored a pair of goals including the overtime winner as the Phantoms rallied from behind for a 5-4 overtime win against the Binghamton Devils on Wednesday night. Pascal Laberge, Ryan Fitzgerald and Linus Sandin also scored for the Phantoms in the come-from-behind effort. All four Phantoms away games this season have gone to overtime and the Phantoms have won three of those games.

Hot Start – The Phantoms five-game point streak to begin the season equals the longest in franchise history which initially happened in the 2007-08 season when the Philadelphia Phantoms began at 5-0-0. The Phantoms have never recorded points in the first six games of the season in the 25-year history of the franchise. The Chicago Wolves (7-0-0) are the only other unbeaten remaining in the AHL.

Words to the Wisdom – The youngest player in Phantoms franchise history is showing tremendous ability and wisdom beyond his years in his first-ever professional games. Zayde Wisdom scored two goals in consecutive games on February 14 and February 20 and leads the Phantoms in scoring with four goals and one assist in five games. The fourth-round selection of the Flyers from the Kingston Frontenacs on the OHL became the youngest player in franchise history when he debuted on February 6 at 18 years, 6 months and 30 days old beating the record by just 20 days previously held by Derek Mathers of the Adirondack Phantoms. Wisdom would normally be playing in the Ontario Hockey League currently but while that circuit remains on hiatus the contracted players are allowed to gain experience…and wisdom…with games in the professional ranks.

Seeing a Pattern Here – The Phantoms have played to overtime in each of their four away games this season. And in their three overtime wins, the Phantoms rallied from a third-period deficit before prevailing in the extra period. The last two games have been eerily similar; On February 14 at Hershey and on February 24 at Binghamton the Phantoms raced out to a 3-1 lead only to see the opponents score three straight for a 4-3 advantage which was followed by the Phantoms tying the game at 4-4 in the third period and then winning it in the overtime 5-4.
Ryan Fitzgerald, David Kase and Max Willman have all posted overtime winners for the Phantoms this season.

Special Teams – The Lehigh Valley Phantoms surrendered a power-play goal on Wednesday breaking their perfect penalty kill this season. The Phantoms are 14/15 on the PK at 93.3% which rates second in the league only behind Hartford which stands at 11/11, 100%. However, the team’s power play has been off to a sluggish start despite the team’s overall success at 5-on-5. Lehigh Valley is 1-for-21 on the power for just 4.8%.

Welcome Back – Four players were loaned to Lehigh Valley from the Philadelphia Flyers on Monday; David Kase, Derek Pouliot, Felix Sandstrom and Matt Strome. This helps boost a team that had been running a little short on extra players. Kase played for the Flyers last Thursday against the New York Rangers. Pouliot, Sandstrom and Strome have all spent varying amounts of time on the Flyers taxi squad but have not gotten into games with Philadelphia. Pouliot had not played since the Phantoms season-opener on February 6 and Sandstrom has not played since his shutout of Wilkes-Barre/Scranton in the preseason game on February 4.

Scouting the Penguins  – Wilkes-Barre/Scranton enters the game with a 2-2-1 mark following a 4-2 victory over Hershey on Wednesday.  Former Bridgeport Sound Tiger and Charlotte Checker Nick Schilkey leads the team with six points including five assists. Radim Zohorna had two goals and an assist in Wilkes-Barre’s first home victory of the campaign. The 6’6” winger from the Czech Republic signed at 24 years old as a free agent. Veteran Max Lagace and second-year pro Emil Larmi have split goaltending duties. J.D. Forrest is in his first season as head coach of the Baby Pens after serving as an assistant coach for five seasons. This is the first meeting of the Flyers and Penguins organizations since Ron Hextall was installed as new General Manager of Pittsburgh.

Upcoming – The Phantoms return to PPL Center on Saturday night for a rematch against the Penguins. Lehigh Valley will host Hershey on Wednesday.