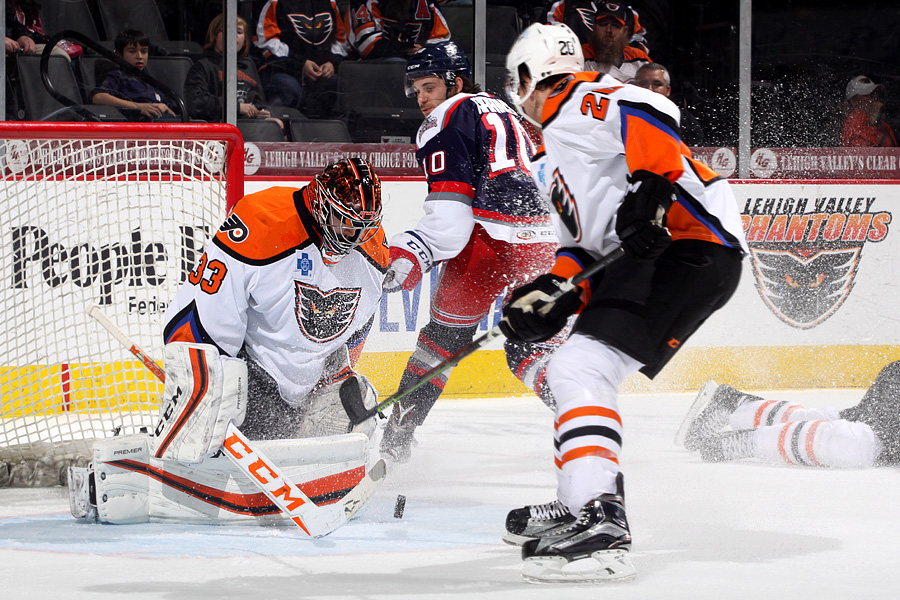 Lehigh Valley, PA – The Phantoms made the most of their hot start and Martin Ouellette came just 15.7 seconds away from his first career AHL shutout in a hard-earned 2-1 victory over the Hartford Wolf Pack in front of another Saturday night standing-room sellout at PPL Center. Ouellette is making the most of his glorious opportunity at the American Hockey League level while Anthony Stolarz is in the NHL with Philadelphia and Jason LaBarbera is sidelined with injury. 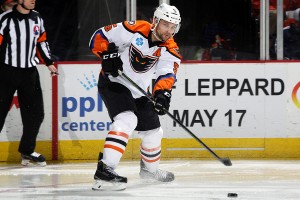 Ouellette received the start for his third straight game and held the affiliates of the New York Rangers off the scoreboard almost to the very end. His 38-save performance earned the second-year pro goalie from the University of Maine #1 Star of the Game honors. He has been recalled eight different times from the Reading Royals of the ECHL but this is the first such occasion in which he has received a regular opportunity between the pipes.

Lehigh Valley would race out to an early start for the second night in a row with goals from Davis Drewiske (5th) and Pavel Padakin (2nd) in the opening minutes while Hartford was struggling to keep up with the relentless attack.

Another packed-house filed into the sparkling, new venue at the corner of Seventh and Hamilton on Fan Appreciation Night. The Phantoms organization thanked their loyal fans by bestowing upon them a wide variety terrific prizes that numbered in the hundreds. The Phantoms were boosted to a quick start by the 8,677 Phantoms faithful getting into the game and making noise early. 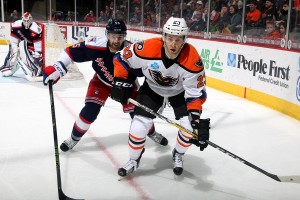 Davis Drewiske lit the lamp for the second night in a row, as the fans had barely settled into their seats, when he surprised Hartford netminder Magnus Hellburg with the game’s opening strike. His tally just 33 seconds into the game on a snapper from the left circle came as a result of some hard work on the fore-check by Danick Martel and Petr Straka who were credited with assists.

“Something we haven’t done enough of is take advantage of the energy from our home crowd,” Drewiske said. “We’ve done that the last couple nights.”

Colin McDonald racked up a pair of big hits in one of his opening shifts including a harsh slam on Chad Nehring that drew the attention of a pair of Hartford players. Chris Brown was called for a roughing penalty in his attempts to bait McDonald into a fight. That’s exactly the type of attitude head coach Scott Gordon wants his leader to bring to the table.

“I think Colin playing physical gets our team going,” Gordon said. “And I think it can also take the other team off their game. They think about retribution and sometimes they take a penalty.”

The Phantoms captain who recently signed a multi-year contract extension with the Philadelphia Flyers organization said there is indeed a fair amount of method to the occasional madness.

“I understand my role and (the physicality) is part of it, “McDonald said. “I said after some previous losses that our fans deserve better. Sometimes all it takes is one big hit and they get involved.” 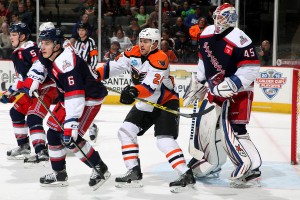 The Phantoms were unable to convert on the ensuing power play but they continued momentum as their domination of the game’s opening minutes continued.

At 11 minutes into the game, big defenseman Samuel Morin showed some significant stick-handling prowess as he rushed up the middle and gained the Hartford line. His backhander off the pads of Hellburg deflected out to Tyrell Goulbroune who deposited the second tally of the night from the right-slot caroming his drive off the lower leg of Pavel Padakin who had his back turned to the shot and was facing the goal. The lamplighter credited to Padakin pushed the Phantoms into a 2-0 lead while they were out-shooting the Wolf Pack by a 12-2 margin at that point.

From there it would be the Wolf Pack pushing forth with a renewed effort to find their game. Hartford picked up momentum in the remaining minutes of the first period and then came on even stronger in the second frame with a 17-shot barrage on Martin Ouellette.

Many of the shots came from the outside and didn’t seem to bother Ouellette too much. But he was able to stop the difficult ones as well as the routine efforts.

A post shot late in the third period by Hartford captain Mat Bodie almost broke the shutout bid. And Ouellette was challenged back-to-back by Chris Brown and and Brian Gibbons on consecutive shifts making his top saves of the night. 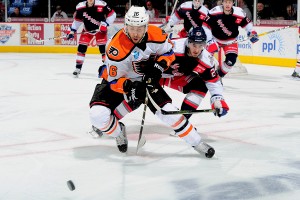 Eventually the Wolf Pack would finally find the back of the net with a 6-on-5 blast from the right wall by Marek Hrivik (11th) to spoil the blank sheet but in the end it was a 38-save masterpiece for Martin Ouellette en route to his second win of the weekend.

Hartford out shot Lehigh Valley 39-26. Both teams were 0-for-3 on the power play. The Phantoms have just three home games remaining in the regular season. Next up is a road-trip all the way to St. John’s, Newfoundland, Canada for a two-game weekend series with the affiliates o the Montreal Canadiens.

The Phantoms return to PPL Center on Saturday, April 9 hosting the Bridgeport Sound Tigers on Faith Night also featuring the team’s annual Canned Food Drive. A limited number of tickets for the last three home games of the season are available at pplcenter.com, by calling 610-347-TIXX [8499] or in-person at the Mealey’s Furniture Box Office at PPL Center [701 Hamilton Street].