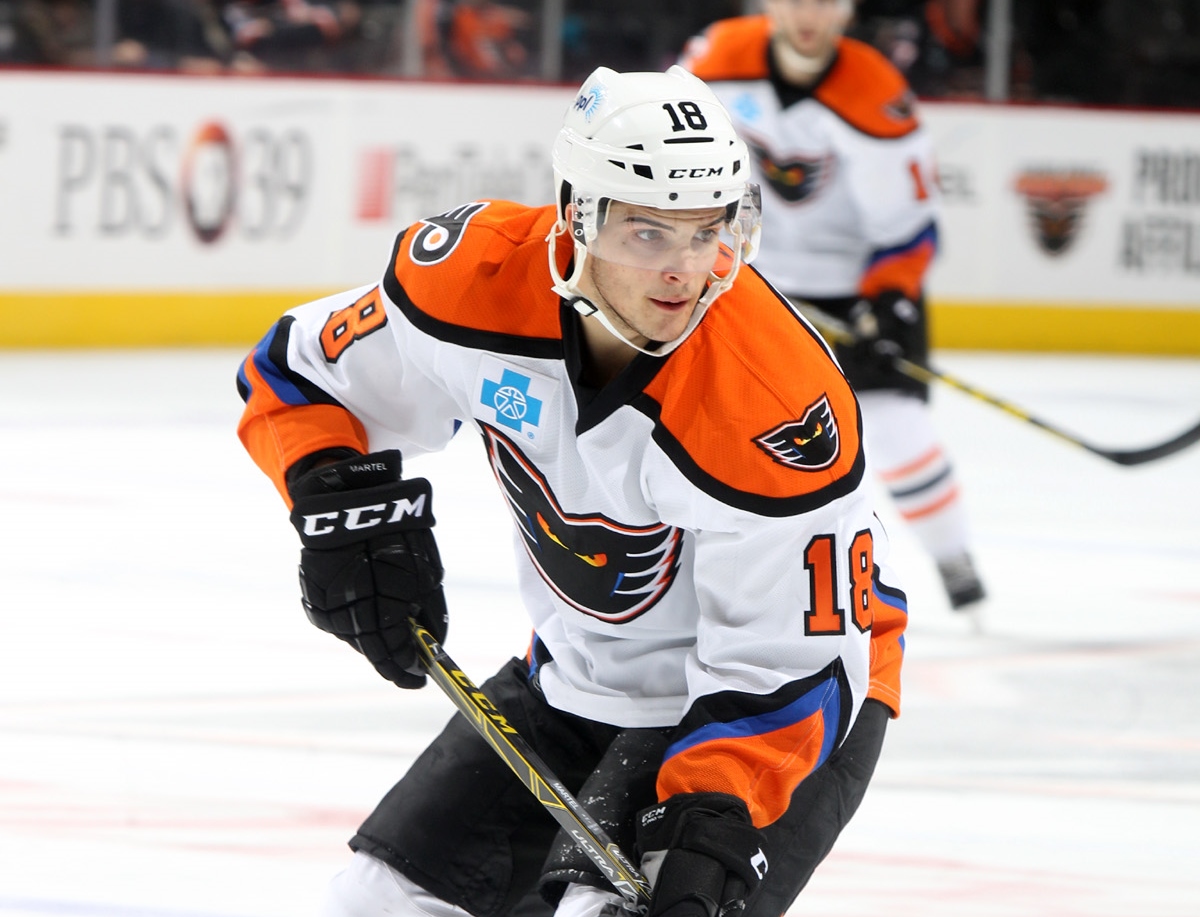 Bridgeport, CT – Standout rookie winger Danick Martel notched his first career professional hat trick and took over the top spot in the AHL for goals among rookies but his scoring surge was not enough for the Phantoms who fell at the Bridgeport Sound Tigers 6-3 on Friday night. Lehigh Valley’s season-long five-game win streak came to a close as Bridgeport ended the Phantoms run in the same location where it began. The Phantoms’ first of their five consecutive triumphs was in a 4-1 decision at Bridgeport on January 17.

The Sound Tigers were led by a hat trick of their own with 34-year-old Bracken Kearns capping his hattie with an empty-net strike with 5.3 seconds remaining that sealed the decision.

Martel’s hat trick was the second of the season for the Lehigh Valley Phantoms joining Colin McDonald who had a three-goal and five-point performance last Wednesday at PPL Center against Binghamton on his way to AHL Player of the Week honors. The Martel trio of goals represents the fourth such occasion for Lehigh Valley all-time. Nick Cousins had a pair of hat tricks last season coming in January against Binghamton at PPL Center and in March on the road against Toronto.

Martel’s 17 goals on the season now ties him for the team lead with Petr Straka who remains out of the lineup with an injury. He now leads all AHL rookies in lamplighters having leapfrogged Nikita Soshnikov of the Toronto Marlies who remains at 16.

Both of Lehigh Valley’s road hat tricks have come against the same goalie. Chris Gibson was in the crease for the Toronto Marlies when Cousins converted on his penalty shot in the third period last March to complete his three-goal evening. And Gibson was again the goalie for this one as well having been traded from the Maple Leafs organization to the Islanders system last September.

A pair of former Phantoms players also found the back of the net to help steer the Sound Tigers comeback. Ben Holmstrom played for the Adirondack Phantoms for parts of five seasons from 2009-10 through 2013-14 and was captain of the team for three of those years. The AHL veteran snuck in a tying goal early in the second period for his first career strike against his ex-team.

Andrew Rowe received credit for the winning tally early in the third period to break a 3-3 tie. A recent tryout signee for the Sound Tigers from the ECHL, Rowe’s professional career began as a member of the Adirondack Phantoms at about the same time as Holmstrom in 2011-12 and 2012-13 where he scored 15 goals while wearing a Phantoms’ sweater in parts of two seasons

Martel helped the Phantoms race out to a 2-0 lead within the opening 10 minutes of the game. His intercept and top-shelf snipe just past the five minute mark was good for an unassisted goal. Then at 9:30 it was some pretty passing by Colin McDonald and Andrew MacDonald to set up Martel’s one-timer from the left circle on the power play for a 2-0 lead.

But Bridgeport battled back with a Bracken Kearns goal from the left circle just over a minute later after a turnover back in the Phantoms end.

Lehigh Valley was slightly fortunate to maintain the one-goal margin into the first intermission after a series of fine stops by Jason LaBarbera including a breakaway denial of Holmstrom with 48 seconds remaining in the frame.

But early in the second it would be Holmstrom again. This time from way over in the left corner where he was able to somehow sneak a drive through the short-side LaBarbera for the equalizer.

The Phantoms again would strike on the power play. This time Martel was in the right circle for his big blast set up by Andrew MacDonald and Chris Conner. And Martel’s hat trick less than seven minutes in the middle period would put the Phantoms up in front 3-2.

But Bracken Kearns converted from the left of the cage on a dish from behind the net to tie the score at 3-3. And then early in the third period Andrew Rowe would find space to fly around the Phantoms zone, swoop behind the goal, and then circle back up to the high slot where he found the opening to rifle his wrister through LaBarbera five-hole for the tie-breaking tally.

Alan Quine’s snipe glove-side a few minutes later extended the advantage to 5-3 and Kearns empty-netter for the hat trick in the closing seconds closed out the scoring.

The Phantoms record moves to 22-22-3 with 29 games remaining in the regular season and their record on the road now stands at 13-9-2. Bridgeport out shot the Phantoms 32-28. Lehigh Valley was 2-for-4 on the power play on yet another successful night for the man-advantage that has successfully converted in six consecutive games. Bridgeport was limited to 0-for-2.

The Phantoms and Bridgeport will rematch back at PPL Center on February 20th.

Next up for Lehigh Valley is a Saturday evening engagement at rival Hershey in round 10 out of 12 of the season series. The Phantoms hold a 6 games to 3 advantage against the Bears this year. Game-time is 7:00 p.m. Be sure to catch all the action on FOX 1470-AM, online at www.fox1470.com or via the iHeartRadio app. Coverage begins with “Countdown to Faceoff” at 6:20 p.m.

The Phantoms are then back in action at PPL Center on Wednesday, February 10 when they welcome the rival Binghamton Senators back to downtown Allentown. The game features a Career Fair with a host of representatives from area sports teams on hand, including the Philadelphia Flyers, Reading Royals, Lehigh Valley IronPigs, Somerset Patriots, Reading Fightin Phils and more. The Wednesday night clash commences a five-game homestand at PPL Center for the Lehigh Valley Phantoms. A limited number of tickets remain so be sure to secure yours now at pplcenter.com, by calling 610-347-TIXX [8499] or in person at the Mealey’s Furniture Box Office at PPL Center [701 Hamilton Street].