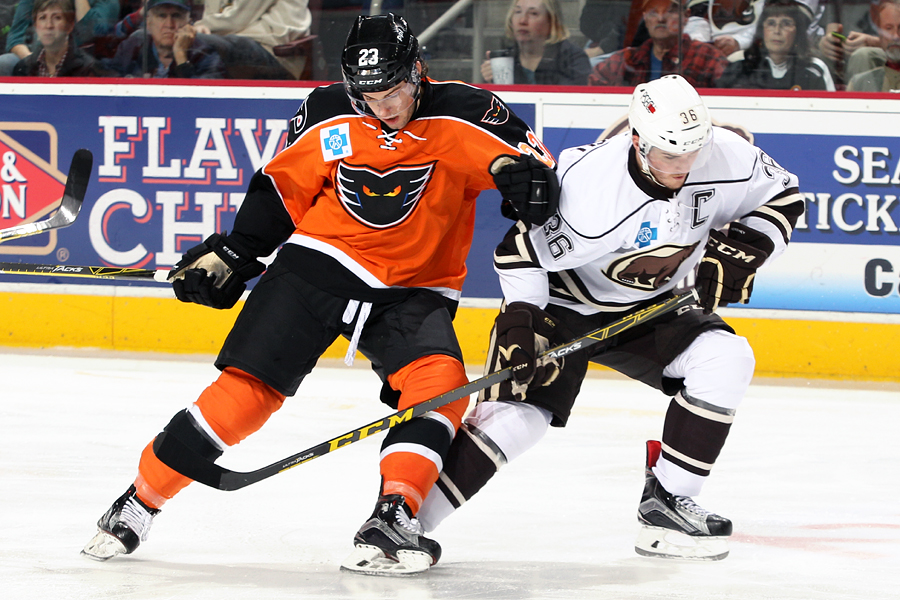 Hershey, PA – The Hershey Bears took out some of their frustrations from their previous lack of success against the Lehigh Valley Phantoms this season in the form of a 5-1 victory on Saturday night at Giant Center. Lehigh Valley had won six out of nine from their Pennsylvania foes entering the game.

In a season-series hallmarked by one fantastically entertaining game after another, the two teams finally had a meeting that was not nearly as breathless.

Aaron Palushaj’s (9th) breakaway conversion late in the second period would go down as the lone Phantoms tally. Martin Ouellette entered in goal in the third period in relief of Jason LaBarbera and steered aside all 16 shots he faced. Former Hershey Bears standout Chris Conner was kept off the scoresheet for the first time in several weeks thus concluding his eight-game point streak.

Hershey struck for a pair of goals in the first period to open a 2-0 advantage. Travis Boyd’s sharp-angle, power-play marker on a one-timer below the left-dot past the four minute mark followed by Chris Bourque’s bar-down snipe rushing up the right wing a few minutes later encouraged Phantoms head coach Scott Gordon to implement his timeout to motivate the Phantoms to get back on track with the caliber of play that was their signature throughout their recent five-game win streak.

Lehigh Valley came out of the timeout with renewed energy and purpose generating several quality chances and receiving a couple of power plays. Colin McDonald banged one off the left post in a close bid to put the Phantoms on the board. And an earlier Chris Conner rush almost went in were it not for an acrobatic save Justin Peters falling backwards but still successfully pawing his glove at the biscuit just enough to keep the bid out of the net.

Boyd would score again midway through the second period one a one timer from the circle and Jakub Vrana weaved his way through the Phantoms defense on a tremendous individual effort for the teenager for another bar-down conversion and suddenly the Bears were in front 4-0.

Aaron Palushaj received a perfectly place lead pass from Kevin Goumas for a breakaway goal late in the second period and suddenly the Phantoms were seeing the momentum swing back to their side.

But Travis Boyd’s deflection goal in the slot of a drive by Eric Burgdorfer would come less than a minute later. The Phantoms contended that Boyd’s hat-trick tally should have been waved off to due the height of his stick. High-stick goals are not subject to video-review in the American Hockey League thus the borderline goal would stand at the Bears enjoyed a 5-1 advantage.

Lehigh Valley received two more power plays late in the second period including a valuable 5-on-3 opportunity but the previously red-hot man-advantage crew for the Phantoms were handcuffed to an oh-fer night for the first time in seven games as Hershey’s penalty kill successfully protected their lead.

Martin Ouellette entered AHL action for the Phantoms for just the thirrd time this season, his second in relief. Playing the final 20 minutes, the second-year pro from the University of Maine who was recently summoned from Reading of the ECHL was able to display his talents in the form of a perfect 16-stop effort in the culminating frame.

The Phantoms still hold a 6-4 lead in the season series over Hershey. Lehigh Valley does not return to Chocolate Town until the final weekend of the regular season.

Hershey out shot the Phantoms 36-27. The Bears were 2-for-4 on the power play while Lehigh Valley finished at 0-for-6.

The Phantoms are back in action at PPL Center on Wednesday, February 10 when they welcome the rival Binghamton Senators back to downtown Allentown. The game features a Career Fair with a host of representatives from area sports teams on hand, including the Philadelphia Flyers, Reading Royals, Lehigh Valley IronPigs, Somerset Patriots, Reading Fightin Phils and more. The Wednesday night clash commences a five-game homestand at PPL Center for the Lehigh Valley Phantoms. A limited number of tickets remain so be sure to secure yours now at pplcenter.com, by calling 610-347-TIXX [8499] or in person at the Mealey’s Furniture Box Office at PPL Center [701 Hamilton Street].