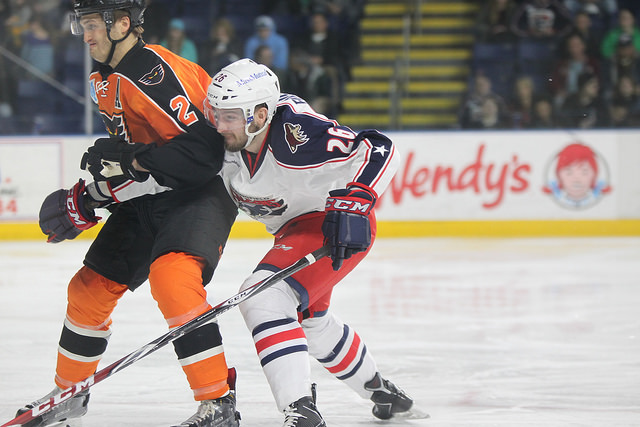 Springfield, MA – Mark Alt’s rising rocket from the right-point with just 2.8 seconds remaining in regulation completed another tremendous third-period comeback for the Lehigh Valley Phantoms who prevailed at Springfield 5-4 on Sunday evening. The Phantoms stunningly rallied from a 4-2 deficit in the third period for the second game in a row.

Cole Bardreau (9th), Tyrell Goulbourne (7th), Phil DeSimone (3rd) and Adam Comrie (3rd) all scored in the balanced Phantoms offensive attack as well as Mark Alt (4th). Greg Carey (23rd and 24th) led the Springfield push with a pair of lamplighters. Chris Conner continued his torrid scoring stretch with a pair of assists while Petr Straka also got into the act with a couple helpers as well.

With the game seemingly headed to overtime, Phil DeSimone picked off a Springfield clearing try and offered a shot from the high-slot with just seven seconds remaining that deflected off the glove of Falcons goaltender Marek Langhamer. With a couple other bodies outside the crease battling for position, the rookie goalie lost his balance thus leaving the game-winning opportunity open for the third-year defenseman from the University of Minnesota. Alt’s winning drive knocked the water-bottle off the top of the cage as his fourth goal of the season capped another big night for the comeback kids.

The game-winner for Mark Alt comes just over a week after he was honored with an “A” on his sweater following the call-up of Andrew MacDonald to Philadelphia. It is the first time Alt has served as a member of the Phantoms captaincy.

With the victory, the Phantoms earned a 4-0 sweep of the season series over their division rivals from western Massachusetts. The Phantoms earned an impressive five standings points out of a possible six in their weekend slate which has seen the team go on a three-game point streak. Lehigh Valley has now snagged points in nine of their last 13 games going 8-4-1 in their latest extended series of critical standings points.

The Phantoms went to work with more late-game drama after finding themselves down 4-2. Adam Comrie’s slapper from center-point on the power play with 15 minutes left pulled Lehigh Valley to within one. Comrie’s power-play strike was set up by Petr Straka who also provided the assistance on Phil DeSimone’s tying conversion with about four minutes left. Both Comrie and DeSimone have scored goals in the back-to-back comeback games for the Phantoms.

Straka hustled behind the goal to retrieve a puck seemingly in the Falcons possession. After Pavel Padakin’s shot from in tight was blasted off the pads of Langhamer it was up to DeSimone to score for his second game in a row on the rebound. That knotted the count at 4-4 with just 4:06 remaining thus providing the set up for Alt’s big game-winning strike.

The contest began with a parade of penalties from both sides thus offering very little 5-on-5 play or game-flow. It was power-play city as the teams traded man-advantage opportunities for the duration of the opening 20 minutes. And Springfield received the bulk of the power plays to start leaving Lehigh Valley trying to gather themselves and get back on track after all the line juggling and energy expended of one P.K. after another.

But it was Cole Bardreau who struck first on the power play on a one-timer in the slot on a set-up from behind the goal by Chris Conner and Lehigh Valley took the initial 1-0 advantage before the Falcons would get rolling.

Springfield responded with two goals of their own before the intermission, both on the power play. Corey Potter’s slapper from the right point made it through a screen and eluded Anthony Stolarz to the far post. And Greg Carey spun from the side of the net to play his first strike of the night to the blocker side for a 2-1 Falcons lead.

Springfield went 2-for-5 on the power play in just the first period alone while Lehigh Valley finished the opening frame at 1-for-3.

The teams cleaned up their play and curtailed the penalties for the rest of the game. Greg Carey scored on the rush from the left circle just past the midway point of the game for a 3-1 advantage for the Falcons.

But the Phantoms gained momentum heading back to the locker room when Davis Drewiske from the center circle neatly connected with Goulbourne racing up the wing. The rising rookie snapped home his seventh of the season from the left dot with just 17 seconds left in the period to narrow the margin to one.

Springfield responded with a 2-on-1 goal in the opening seconds of the third to push their lead to 4-2. Greg Carey turned down his opportunity for a hat trick opting to instead slid the puck across to Craig Cunningham just 39 seconds into the decisive period.

That’s when the Phantoms comeback machine got cranked up. Adam Comrie at 4:38 into the third followed by Phil DeSimone at 15:54 and then Mark Alt at 19:57 brought the Phantoms out of the ashes and into the victory circle.

Lehigh Valley’s three goals in the third period for the regulation win evens their record at 25-25-4 and marked the first time this season the had pulled off such a comeback. The night before, at home against Bridgeport, the Phantoms struck twice in the final eight minutes to overcome a similar 4-2 hole and forge a tie thus earning a valuable standings point in a shootout loss. In a November game, Lehigh Valley scored twice in the last nine minutes against Hershey in an exciting comeback that eventually led to a Nick Cousins overtime winner in a 3-2 decision.

With another multi-power-play goal game, the Phantoms capped a 5-for-20 weekend on the man-advantage. Lehigh Valley has gone a scorching hot 18-for-73 for 24.7% in their last 13 games since January 17 notching at least one power-play marker in 11 of those 13 contests.

Chris Conner racked up another pair of helpers and now has points in 14 of his last 15 games notching six goals and 15 assists for 21 points along the way. Conner also moved into a tie for the team-lead in points with 38 along with Nick Cousins who is currently with Philadelphia and Taylor Leier whose one assist also put him at 38. Leier has been similarly hot to Conner of late as the 21-year-old has cranked up 8-10-18 in just his last 13 contests since January 17.

Springfield out shot the Phantoms 38-29. Lehigh Valley and Springfield both finished at 2-for-7 on the power play.

The Phantoms return to action at PPL Center with a pair of games next weekend. First, on Friday, February 26, the Hartford Wolf Pack, the AHL affiliate of the New York Rangers, invade downtown Allentown. Then, on Saturday, February 27, it’s meLVin’s Birthday Bash when the Utica Comets, the AHL affiliate of the Vancouver Canucks, come to PPL Center for a 7:05 p.m. tilt. A limited number of tickets remain for both highly-anticipated showdowns so be sure to secure yours now at pplcenter.com, by calling 610-347-TIXX [8499] or in person at the Mealey’s Furniture Box Office at PPL Center [701 Hamilton Street].