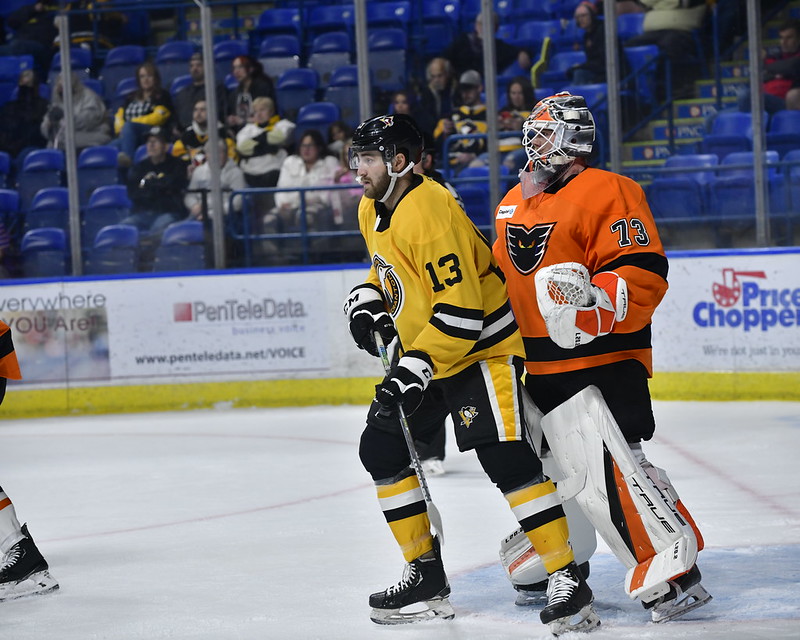 Wilkes-Barre Twp., PA – Goaltender Nolan Maier was spectacular in his first game wearing a Phantoms jersey turning aside 27 out of 28 shots he faced in 40 minutes of action. The Yorkton, SK native contended with a number of point-blank chances and big one-timers to keep the game deadlocked at 0-0 for as long as he could but eventually the host Wilkes-Barre/Scranton Penguins broke through to take a 2-0 decision on Friday night in Lehigh Valley’s preseason opener. 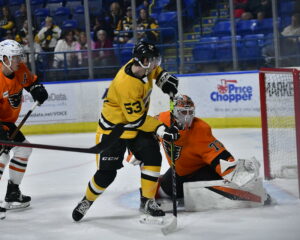 Maier was the Flyers’ starting goalie in the Rookie Series game of September 16 against the New York Rangers. He allowed one goal in 30 minutes as the Phantoms eventually went on to win in overtime. That was a decent PPL Center debut but his performance in Wilkes-Barre was on another level. The all-time wins leader in WHL history with 122 victories is on an AHL contract with the Phantoms. He was an almost everyday starter for the Saskatoon Blades playing 60 games last season and has translated those talented to an impressive beginning of his pro career.

Lehigh Valley sat out a number of his team’s top players for this first look at the team in order to get a good look at all of his tryout players. Tyler Kirkup, Dominc Cormier, Zane Franklin, Max Newton and Tye McSorley received a big chance to show their stuff.

Last year at this time, it was newcomer Hayden Hodgson, on a tryout contract, who impressed with some hits on the forecheck in a preseason game at Wilkes-Barre who landed an AHL deal with the Phantoms and eventually an NHL contract and debut with the Flyers.

The Penguins got off to a hot start with some big chances on Maier and a 9-0 shots advantage in the first period. But Maier stopped them all including a blocker save on a breakaway for  Caggiula.

Lehigh Valley found their opening late in the period when rookie Elliot Desnoyers raced up ice on a shorthanded breakaway. His attempt was disrupted by a holding penalty from Xavier Ouellet but the Phantoms continued with the momentum to generate some improved chances on Tommy Nappier. 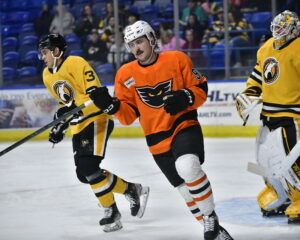 Desnoyers also had a strong chance earlier in the second period on a feed from Zayde Wisdom. From the right circle, he pulled the puck around a defenseman towards the slot where the lefty shooter got off a strong drive that just missed the corner.

Early in the second period was perhaps Maier’s finest sequence when he made six denials on a Penguins power play that included point-blank chances and big one-timers from the left circle offered by Valterri Puustinen. Shots were 19-6 at the midway point of the contest.

The Penguins later broke through on another power play when Caggiula got the puck on the left boards and threaded the needle all the way across to defenseman Reinke who was wide open in the right-circle for the easy backdoor conversion.

Cooper Zech dropped the gloves shortly thereafter as the 5-foot-9 defenseman stepped up for his teammate Colin Felix during a post-whistle dust up.

Caggiula pushed the puck up along the right wing boards to connect with Legare in the closing minutes. Successfully catching the Phantoms on a change, Legare took the puck to the right circle to blast home the final score of the evening with under three minutes left.

The Phantoms will appear at PPL Center for the first time on Saturday night hosting the Hershey Bears in a preseason rivalry showdown. Some of the team’s best players who did not dress in tonight’s game might be expected to be in the lineup on Saturday. Lehigh Valley concludes its preseason schedule on Wednesday night at PPL Center in a rematch with the Wilkes-Barre/Scranton Penguins.