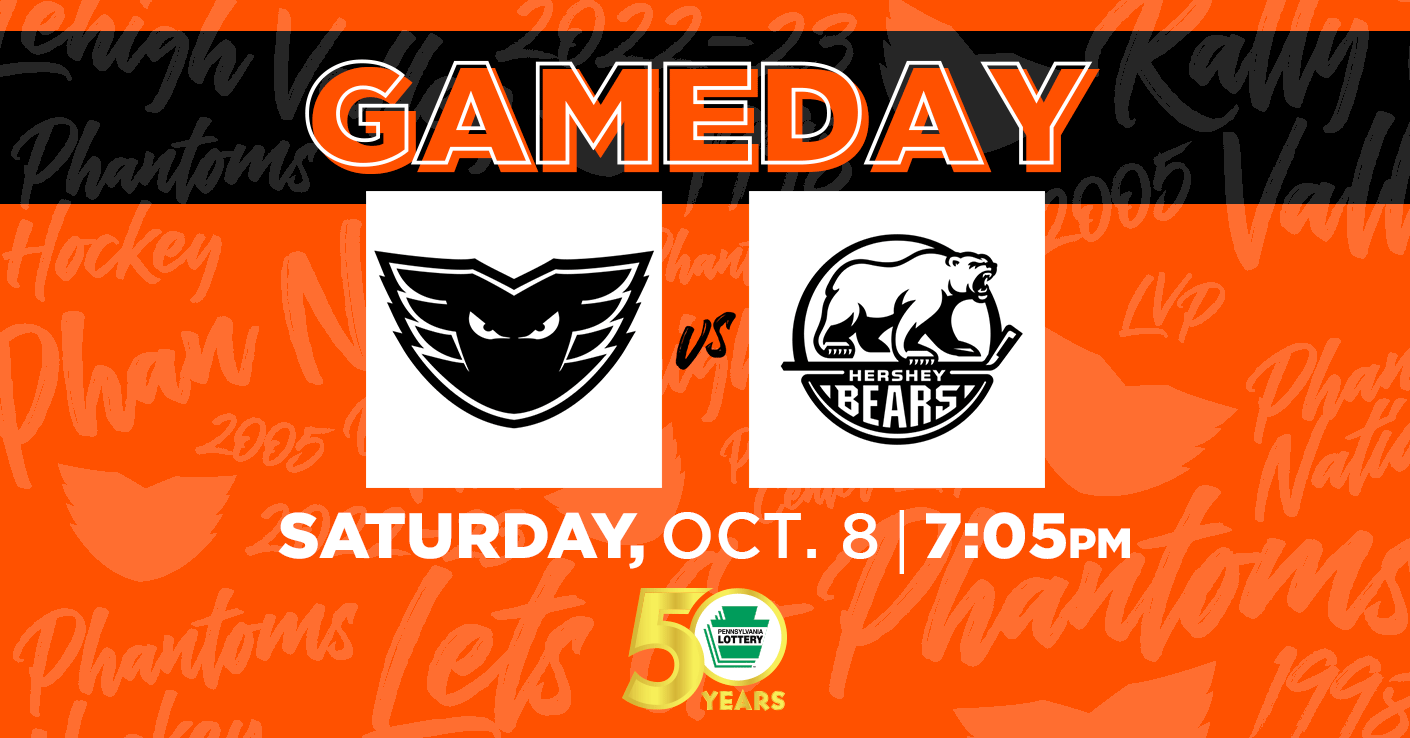 TONIGHT – It’s a Phantoms Game Day, presented by the Pennsylvania Lottery, as the Lehigh Valley Phantoms make their PPL Center debut tonight against the Hershey Bears in preseason action. This is the second game out of three for Lehigh Valley in the preseason which will conclude on Wednesday with a rematch engagement against Wilkes-Barre Scranton at PPL Center.

BROADCAST – Catch all the action of tonight’s preseason debut with Bob Rotruck on the Phantoms 365 app beginning with the pregame show at 6:45 p.m. Fans can also listen on 1470-WSAN and on their smart speakers at “Play Phantoms Radio 24/7”. Also available at the “Listen Live” button on PhantomsHockey.com

LAST TIME – Nolan Maier looked particularly good in Phantoms Orange. The emerging goaltender, who is entering his debut professional season, turned aside 27 of 28 shots in 40 minutes of action. But Wilkes-Barre/Scranton eventually broke through for a 2-0 win on goals for Mitch Reinke late in the second period and Nathan Legare with under three minutes remaining in the game. Elliot Desnoyers had a couple of the stronger chances for the Phantoms including a breakaway and a close-range shot in the sot that just missed. Many of Lehigh Valley’s regulars sat out in order to provide a long look and evaluation of various tryout contract players.

OUTLOOK – Veteran leaders and captains Cal O’Reilly and Garrett Wilson lead the group that also includes familiar names such as Isaac Ratcliffe, Max Willman, and Linus Sandin, all of whom made their NHL debuts last season.

Young prospects Tyson Foerster and Cam York were among nine players assigned to the Phantoms this week. The pair of first-rounders have both spent parts of the last two seasons with Lehigh Valley.

Jordy Bellerive spent the last three seasons as a nard-working agitator with the Wilkes-Barre/Scranton Penguins so tonight’s game with his new team in Lehigh Valley will be a particularly interesting one for him going up against his former teammates.

Popular U.S. Olympian Pat Nagle is back with the Phantoms and joins WHL all-time wins leader Nolan Maier to serve as the team’s netminding tandem for now while Philadelphia hangs onto four goaltenders due to injuries. The Flyers have other roster decisions to make before their regular season begins next Thursday thus the Phantoms can expect to receive even more players that the crammed and jammed field they already have in Allentown.

In total, there are 36 players on the current roster, including seven tryout players of which two are goalies. So the Phantoms will have their own roster decisions to make through a highly competitive training camp.

TONIGHT’S OPPONENT – The Hershey Bears are 0-1 on the preseason following a 3-2 loss at Wilkes-Barre/Scranton on Wednesday. Three Phantoms alumni are on the Hershey roster including Mike Vecchione, who led the Bears in scoring last year, as well as Matt Strome and Logan Day. Todd Nelson takes over as the new head coach with Hershey. The former Grand Rapids Griffins and Oklahoma City Barons bench boss replaces Scott Allen who accepted an opportunity to serve as an assistant coach with the Washington Capitals.

UP NEXT – The Phantoms conclude the preseason on Wednesday, October 12 against the Wilkes-Barre/Scranton Penguins.

Lehigh Valley opens the regular season with a return visit to the Penguins on Saturday, October 15 at 6:05 p.m. and will continue the weekend stretch with a game at Hershey on Sunday, October 16 at 3:05 p.m.