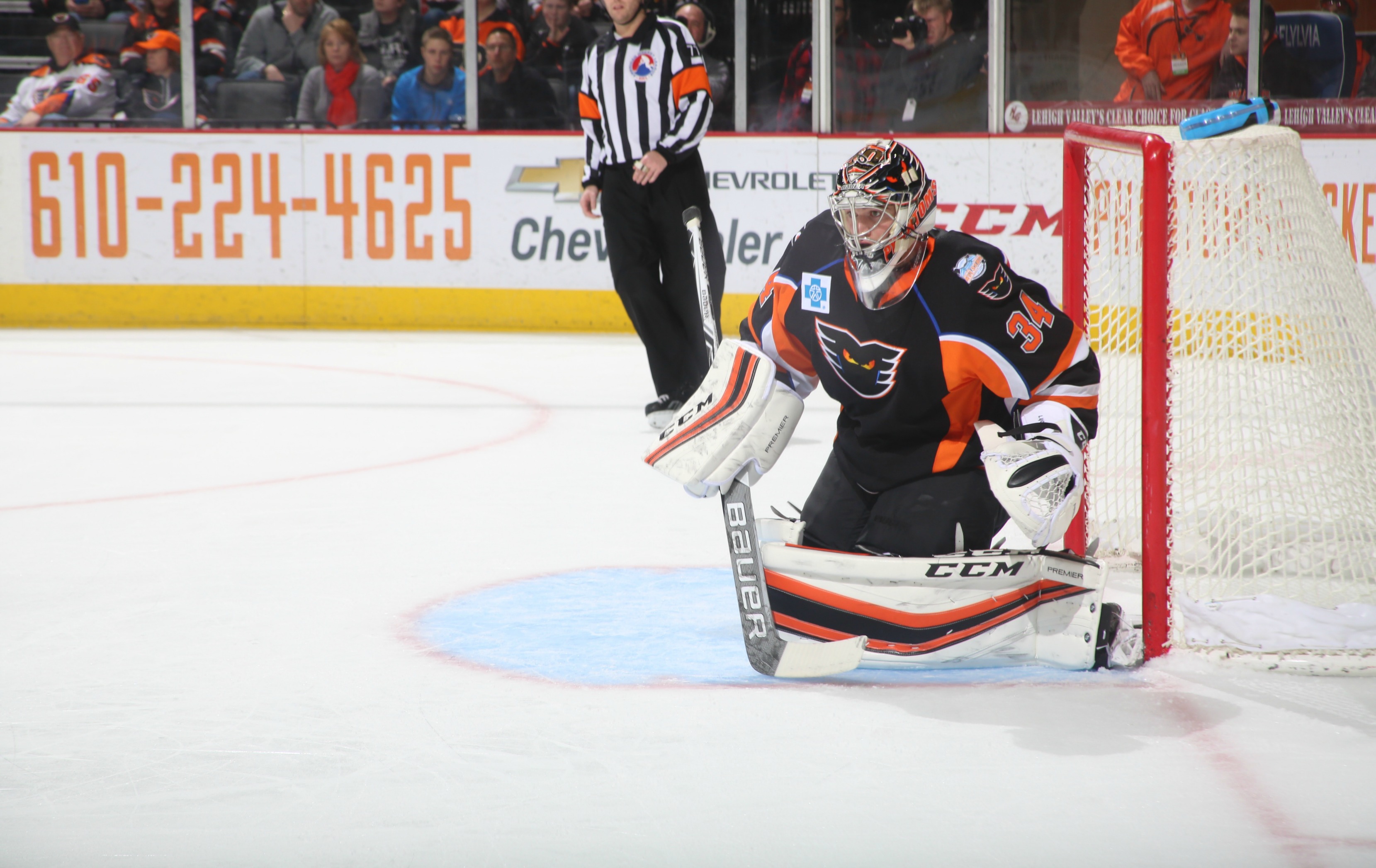 Lehigh Valley, Pa. – Alex Lyon registered his second professional shutout with a 31-save performance Saturday evening while the Lehigh Valley Phantoms supported their first-year netminder with a power play goal and shorthanded marker as they upended the Albany Devils 2-0 in front of 8,744 fans at PPL Center. With the win, the Phantoms improved to 22-9-2 overall this season as they held onto sole possession of second place in the tightly-contested Atlantic Division. 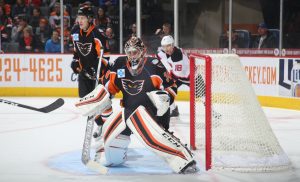 Greg Carey (17th) converted on the power play while Scott Laughton (4th) scored shorthanded as Lehigh Valley captured its seventh win over the club’s last 10 games. Carey’s conversion was his team-leading 17th tally of the year as he moved into third place among all AHL skaters in goals scored this season. Meanwhile, Laughton’s strike marked the fourth shorthanded goal scored by the Phantoms this season.

And that proved to be plenty of offense for Lyon who authored his second professional shutout and league-leading 15th win of the year with an impressive 31-save performance. A first-year netminder who is coming off three incredibly successful seasons as Yale University, Lyon recorded his first professional shutout back on November 23 in a 1-0 win at the Binghamton Senators (28 saves). With Saturday’s triumph, he improved to 15-6-2 overall this year and has now recorded 11 games this season with at least 30 saves. 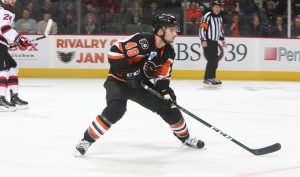 Lyon wasn’t alone in Lehigh Valley’s impressive defensive performance on Saturday though. The Phantoms were a perfect 7-on-7 on the penalty kill against the Devils marking the team’s most impressive penalty killing effort to date this season.

A strong night on special teams was capped by a 1-for-5 performance on the power play as Lehigh Valley improved to 13-5-1 when converting a man-advantage marker this season. 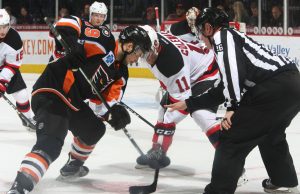 Neither side found the back of the net in the opening period despite a combined 22 shots on goal. Lyon turned aside all nine Devils shots that came his way while Albany goaltender Ken Appleby answered the 13 Phantoms shots authored in the first frame, including a Jordan Weal penalty shot that sizzled just wide of the right post late in the opening stanza. And even though the opening period didn’t feature any scoring, it certainly boasted plenty of action.

Despite the fact that Saturday’s contest marked the first meeting of the year between Lehigh Valley and Albany, the opening period featured the kind of tenacity often reserved for intense rivalry showdowns. The bad blood boiled early when, just over five minutes into the contest, Nic Aube-Kubel engaged in his first professional fight when he dropped the gloves with Albany’s Blake Coleman.

The Phantoms broke the scoreless deadlock just prior to the midway point of the contest when, while on the power play, Carey’s initial bid from the slot was blocked but he was able to gather the loose puck before sending in his team-leading 17th goal of the season. Weal and Chris Conner assisted on the man-advantage marker scored 9:55 into the middle stanza. With the conversion, Carey has now found the back of the net in six of his last eight games as he continues to pace all AHL skaters in power play goals (10).

Lehigh Valley doubled its lead just prior to the second intermission with another special teams marker when Laughton was able to convert shorthanded. After tracking down Reece Scarlett in neutral ice, Laughton was able to strip him of the puck before cruising in down the right wing and snapping home a perfect shot into the upper left hand corner of the goal. The shorthanded conversion marked the fourth such goal scored by the Phantoms this season and was Laughton’s fourth tally overall this year. The unassisted shorthanded tally came 18:27 into the second period.

The Devils continued to push in the third period but Lyon and the Phantoms defense simply didn’t buckle as Lehigh Valley was able to hang on for its 11th win inside PPL Center this season.

The Phantoms are back in action at PPL Center on Sunday when they welcome the Utica Comets, AHL affiliate of the Vancouver Canucks, to downtown Allentown for a 5:05 p.m. showdown. Sunday’s game will be Star Wars Night at PPL Center and a limited number of tickets remain and can be purchased HERE.