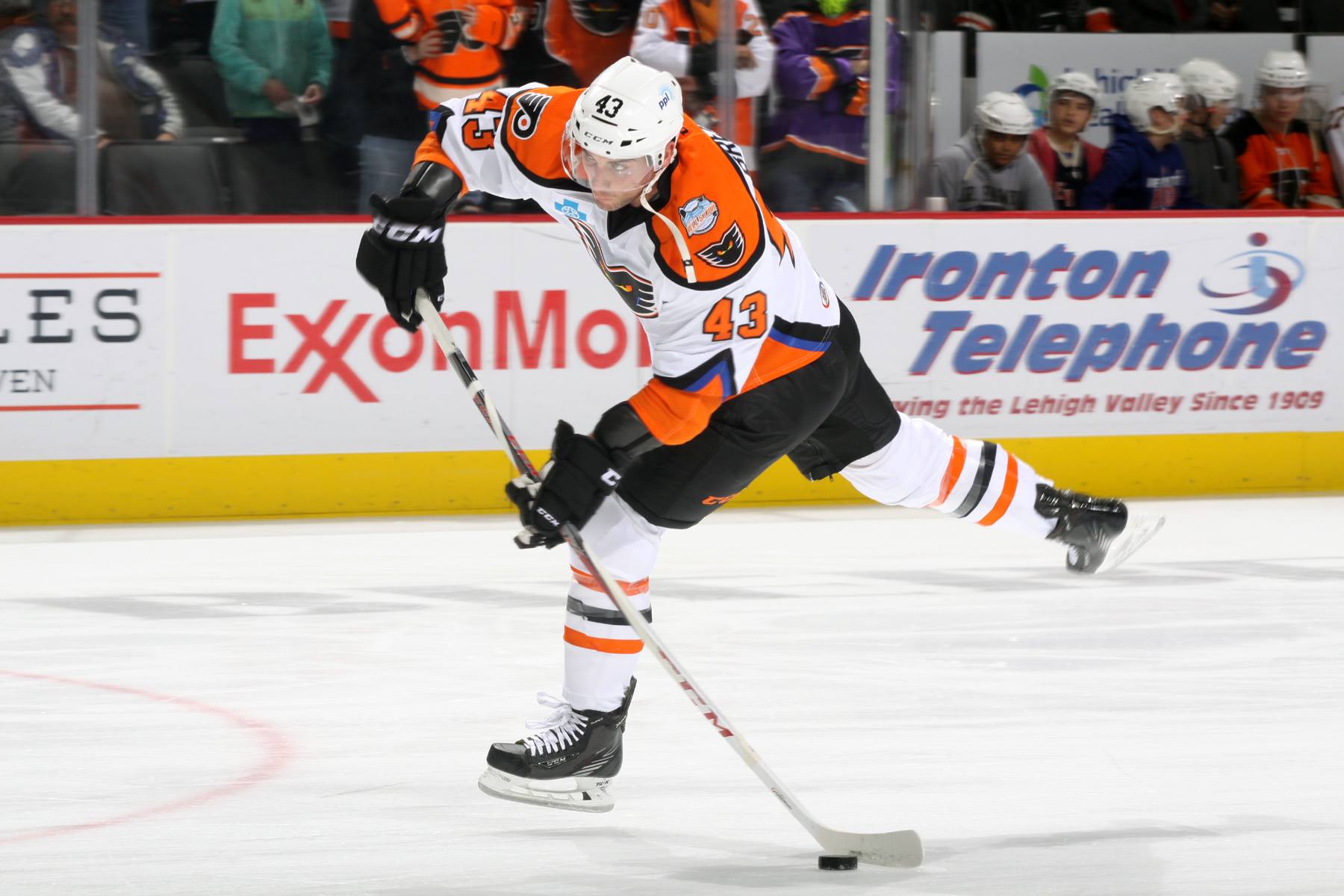 Hartford, CT – T.J. Brennan’s blast from the top of the right circle with just three seconds remaining hit off the base of the far post and caromed away allowing the host Hartford Wolf Pack to escape with a 2-1 victory on Friday night at XL Center.

Magnus Hellburg virtually carried the Wolf Pack team on his big Swedish shoulders with a dazzling 31-save performance that included several point-blank denials including some spectacular stops on Scott Laughton, Chris Conner, Andy Miele and others.

Jordan Weal (11th) struck for the opening tally of the game to give the Phantoms the initial advantage. In so doing, Weal moved into fourth in the AHL in points with 32.

Recovering Rangers Russian rookie Pavel Buchnevich (1st) scored in his AHL debut and Chris Brown (7th) also lit the lamp for the Pack who acquired their first home-ice win against the Phantoms in three tries.

Anthony Stolarz returned to the Phantoms lineup for the first time since November 12 and repelled 21 of 23 Hartford attempts in a night that saw the big third-year pro make multiple fine stops in his crease as well.

The Phantoms also welcomed back Taylor Leier following his 10-game stint with the Flyers. It was Leier’s first game with the Phantoms since December 4 at Bridgeport. The evening also marked the season debut of steady defenseman Mark Alt who took an injury in the PPL Center preseason Philadelphia Flyers game on September 28 against the New Jersey Devils. Alt had a big opportunity to tie the game in the third but a scrambling Adam Tambellini courageously blocked his shot to keep Hartford in front.

T.J. Brennan offered a blast from center-point that caromed off the active end-boards and out to Danick Martel in the slot whose stick was tied up. Jordan Weal found the puck while momentum had him moving behind the right side of the cage. Weal caught Hellburg with his head turned the other way and found enough daylight to bank a shot off the back of the left arm of the Hartford goalie and into the net.

The Phantoms out shot the Wolf Pack 9-5 in the first period and dictated the pace while allowing minimal opportunities to the New York Rangers affiliation.

Hartford roared back with an early 9-0 shot advantage to begin the second period and took advantage of back-to-back power play chances with a man-advantage conversion sniped in by talented Russian Pavel Buchnevich who was assigned to Hartford earlier in the afternoon by the Rangers as he recovers from injury. Mat Bodie’s center-point dish to Buchnevich at the base of the right circle gave the big winger just enough daylight to sneak in his sharp-angle shot for the 1-1 tie at 8:59 into the second.

About a minute-and-a-half later the Wolf Pack jumped on a faceoff win in the offensive zone for a sneaky conversion. Philip McRae’s successful draw on the left-wing dot was corralled by Chris Brown directly who hustled in directly behind him. Brown offered a potentially screened shot to the far side that eluded the glove of Stolarz on the speedy play that took all of two seconds after the drop of the puck.

From there, it was an exercise in hanging on for Hellburg and the rest of the Wolf Pack. The Phantoms were afforded consecutive power play opportunities early in the third period but were unable to equalize. The Phantoms continued to generate close-range chances right on top of the scrambling Hellburg but somehow Lehigh Valley’s efforts to find the back of the net were snake-bit allowing Hartford to cling to the victory.

Lehigh Valley out shot Hartofrd 32-23 including 11-7 in the third period. The Phantoms were 0-for-4 on the power play while the Wolf Pack finished at 1-for-3.

The Phantoms play their first home games of 2017 on Saturday against the Albany Devils and Sunday at 5:05 p.m. against the Utica Comets. Sunday is Star Wars Night at PPL Center featuring several Star Wars characters in costume available for interactions, pictures and fun! Tickets for upcoming Phantoms home games are available at PPLCenter.com