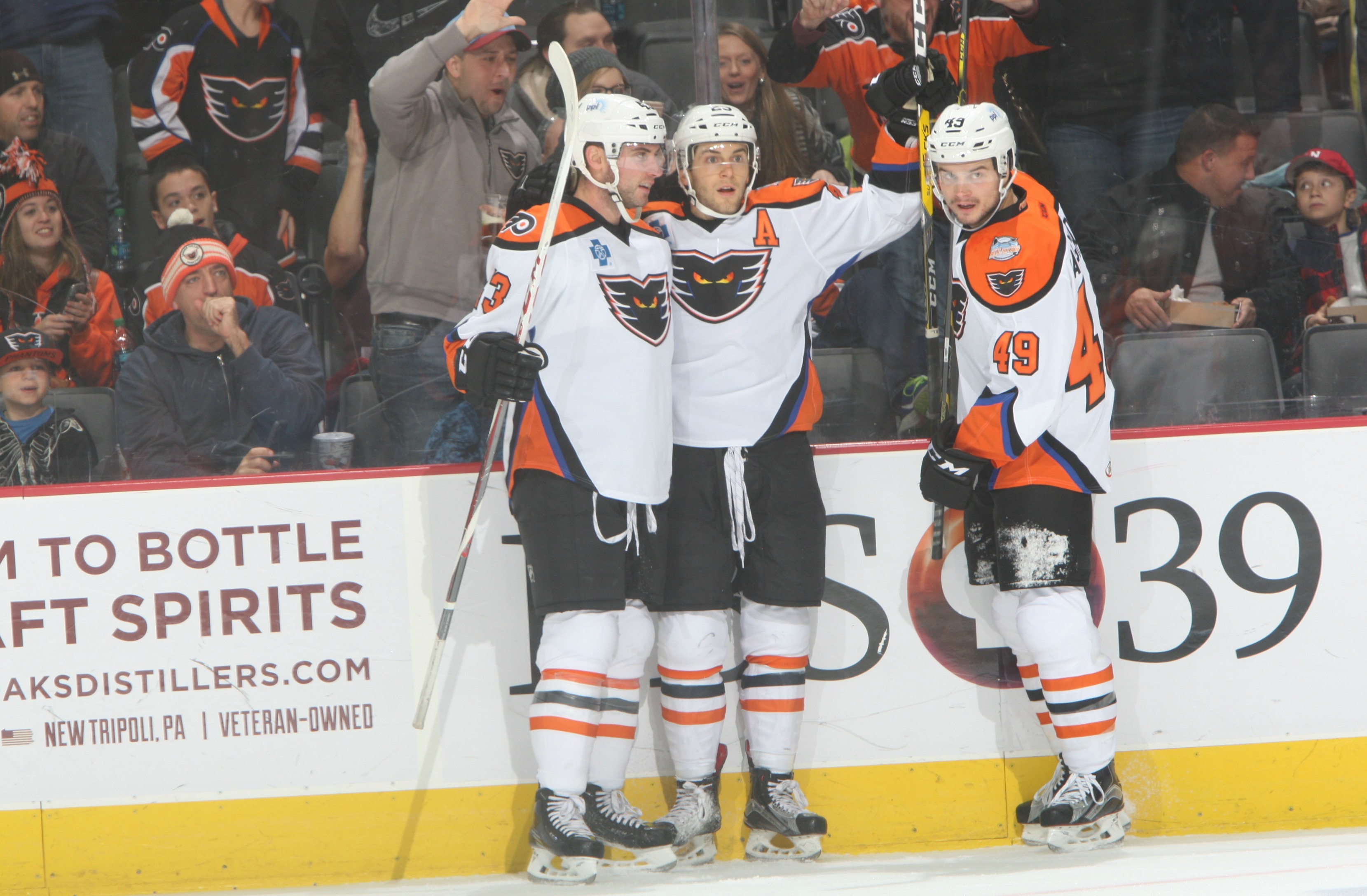 Lehigh Valley, PA – The Lehigh Valley Phantoms blasted away against one of the top teams and defenses in the league for a 7-2 rout of the visiting Toronto Marlies on Saturday night at PPL Center. Lehigh Valley’s fifth straight victory came at the expense of the North Division front-running Marlies who suffered only their third regulation loss of the season. 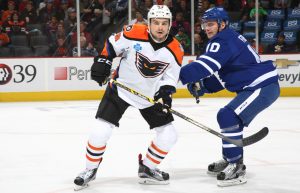 Nobody saw this coming. Toronto entered the game with the second-best defense in the American Hockey League allowing just 2.1 goals per game. And goaltender Antoine Bibeau was among the league leaders with a 1.62 goals-against average. But the high-flying Phantoms offense torched Bibeau and the Marlies for seven in the blowout victory to inflict some significant damage to those impressive numbers.

“We talked about it before the game being a measuring stick of where we are,” Phantoms head coach Scott Gordon said. “The response from our group was tremendous tonight.”

The Phantoms were boosted by another large sellout crowd of 8,709 packing into PPL Center for the big Saturday night showdown. It marked the second sellout of the season as well as the 48th all-time since the Phantoms arrival to Center City Allentown three seasons ago. Over a thousand of the fans thrilled with the big win were part of the Boy Scout Night event at PPL Center that included an entertaining parade on the ice at the first intermission. 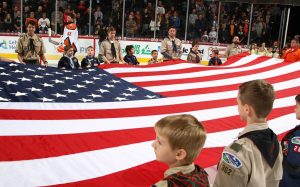 The scoring opened midway through the first period with a blocked shot by Scott Laughton leading to a long pass hitting Taylor Leier in stride for a breakaway. Leier’s former teammate from major juniors, Brendan Leipsic, was hounding Leier all the way and appeared ready to knock the puck free and prevent the shot. But Leier neatly moving the puck away from Leipsic’s reach, over to his forehand, and was able to bury his drive falling over to the left circle for a 1-0 advantage.

A little over four minutes later, former Marlie T.J. Brennan would vicitimize his ex-teammates when he slid the puck over to rookie defenseman Reece Willcox who confidently drove around and behind the net over to the left of the cage on a wide wrap-around. With the give handcuffing Bibeau and loose in the blue, Bardreau was able to force his stick in first to nudge home his second goal of the season. Danick Martel also with a touch on the play was credited with an assist as well on Bardreau’s second goal of the season. 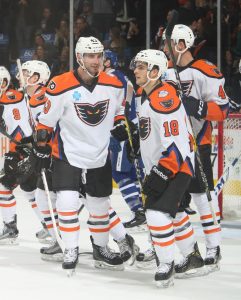 Leading 2-0 entering the second period, the Phantoms wasted no time for their next conversion. Off a center-faceoff win, the Phantoms took advantage of their carry-over power play time in transition with Leier rushing up the right-wing boards and backhanding a pass through to Jordan Weal who quickly kept momentum going over to an open Greg Carey over to his left. A diving Bibeau had no chance on Carey’s bid for a team-leading seventh goal of the season. Greg Carey paces the AHL with six power-play goals.

Byron Froese in the slot scored his sixth of the season just four minutes later on a drop from Tobias Lindberg bringing the Marlies back into the game. And the Phantoms spent much of the rest of the second period thwarting Toronto’s surge and preserving the 3-1 lead all the way to the next break.

The fireworks really exploded in the third period when the hosts struck for four more to salt the game away. Colin McDonald got there first to another loose puck in the blue and pushed home his seventh of the season at 3:50 into the final frame for a 4-1 lead with Scott Laughton and T.J. Brennan recording assists on the play.

Toronto responded less than a minute later on a tally from NHL veteran Milan Michalek. 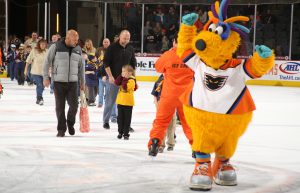 But Lehigh Valley would score the final three goals to build on the 4-2 lead. Scott Laughton briefly lost a puck in the left circle but quickly secured it right back to set up his third helped of the night on a fine cross-ice feed to Leier in the right circle at 7:20 into the third period.

“We talked about it before the game,” Leier said echoing Gordon’s sentiments. “We wanted to show other teams and the league that we can compete with the top teams in league.”

The Phantoms stretched the lead to 6-2 when Sam Morin would spring a pair of forward on a 2-on-1. Corban Knight up the left wing successfully pushed the puck back to rookie Radel Fazleev on their rush up ice allowing the Russian Rookie to walk away with a souvenir on the night when he score his first career professional goal at exactly 10:00 into the third.

Lehigh Valley capped the scoring in the closing moments of the game when Jordan Weal knocked home his fourth of the season on the power play with just 21 seconds to go after Colin McDonald drove behind the net forcing Bibeau to lean the other way just long enough.

Scott Laughton led the Phantoms with his three-point night, all on assists.

“This was a statement game for us,” Laughton said. “Guys are tired coming back late (from Friday’s game at Utica) from the bus ride home. This showed character.”

The impressive outburst comes almost exactly one year after Lehigh Valley’s first-ever seven-goal night. On November 13, 2015 the Phantoms torched the visiting Rochester Americans 7-1. Lehigh Valley would reach the gaudy number again on February 10, 2016 in aa 7-2 triumph over the Binghamton Senators. This big win was the third time ever for Lehigh Valley to score seven goals in a game while falling two shy of the all-time franchise record of nine most recently accomplished on April 1, 2011 against the Albany Devils.

The Phantoms out shot the Marlies 27-24. Lehigh Valley’s lethal power play successfully struck for two more goal in five attempts while primarily staying out of the box and limiting Toronto to just 0-for-1.

Lehigh Valley improved to 7-3-1 with their fifth straight win while Anthony Stolarz knocked away 22 Marlies attempts in the decision. The Phantoms return to action Sunday at 5:00 traveling to Giant Cente for an engagement with the Hershey Bears.

The Phantoms return to PPL Center on Wednesday, November 16 hosting the Atlantic Division leading Wilkes-Barre/Scranton Penguins in the first of 12 rivalry showdowns. Tickets are available by clicking HERE.