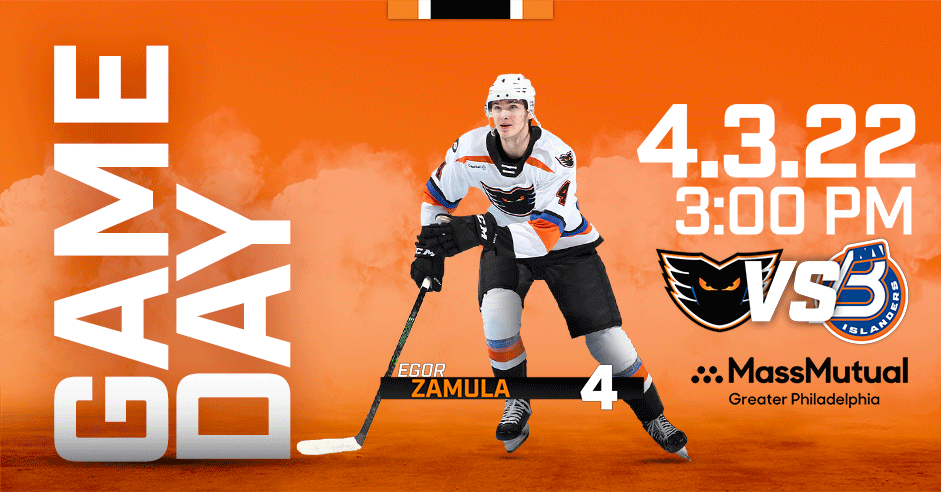 TODAY
It’s a GAMEDAY presented by MassMutual as the Lehigh Valley Phantoms look to complete a perfect weekend in today’s afternoon tilt at the Bridgeport Islanders. The Phantoms are coming off exciting come-from-behind home wins against the Wilkes-Barre/Scranton Penguins and Utica Comets on Friday and Saturday.
Lehigh Valley (24-27-11) is playing game 63 of the season and there are 14 remaining including today.

LAST TIME
Garrett Wilson scored twice, including the game-winning goal in the third period, and “Los Fantasmas” rallied from a 2-0 deficit to post an exciting 3-2 win against the top team in the Eastern Conference on Saturday night at PPL Center. Ryan MacKinnon also scored on the deflection of an Adam Clendening shot in the third period just 57 seconds before Wilson gave the Phantoms their first lead of the night. Felix Sandstrom racked up 37 saves including a spectacular denial of Alex Holtz on the backdoor with just 1:10 left.
It was practically a tale of two games with the first-place Utica Comets dominating the first and then part of the second with initial shot advantages of 8-1, 17-4 and 27-12. But the Phantoms found their stride in another great comeback against Utica.

UTICA COMETS
Previous red-hot Bridgeport (27-26-10) had its seven-game point streak (6-0-1) come to a crashing halt in an embarrasing 9-2 loss at Wilkes-Barre/Scranton on Saturday.
AHL veteran Chris Terry leads the B-Isles with 23-26-49. Phantoms’ alum Andy Andreoff is third on the team with 16-23-39 and popular former Phantom Cole Bardreau has scored 13-11-24 including three shorthanded goals. NHL veteran goalie Cory Schneider has been recalled to the New York Islanders. The Phantoms are 1-2-0 against Bridgeport.
The seventh-place Islanders are five points ahead of Lehigh Valley with the Phantoms still holding one game-in-hand on one of the teams they are hoping to chase down. Head coach Brent Thompson is the father of Buffalo Sabres’ first-rounder Tage Thompson and New Jersey Devils’ prospect Tyce Thompson.

PHANTASTIC!
– Five Phantoms players have made their NHL debuts this season: Max Willman, Felix Sandstrom, Linus Sandin, Isaac Ratcliffe, Hayden Hodgson
– Ryan MacKinnon is on a two-game goal streak and three-game point streak after registering zero points in his first 17 games of the season. The life-long defenseman had never played forward until this season after he was pressed into emergency duty up front in January.
– Garrett Wilson has four goals in the last four games including three power-play goals. The hulking 31-year-old win from Barrie, Ontario will play his 499th career AHL game today. He has played in 685 career pro games including 84 contests in the NHL with Florida and Pittsburgh.
– Cal O’Reilly has 18 goals this season to equal a personal high. The 35-year-old captain of the Phantoms also had 18 goals in a season 15 years ago in the 2006-07 season when he was a 20-year-old rookie with the Milwaukee Admirals. Cal has five goals in his last five games including a pair of two-goal games.
– The Phantoms have played 62 games and have 14 remaining in the 2021-22 regular season.