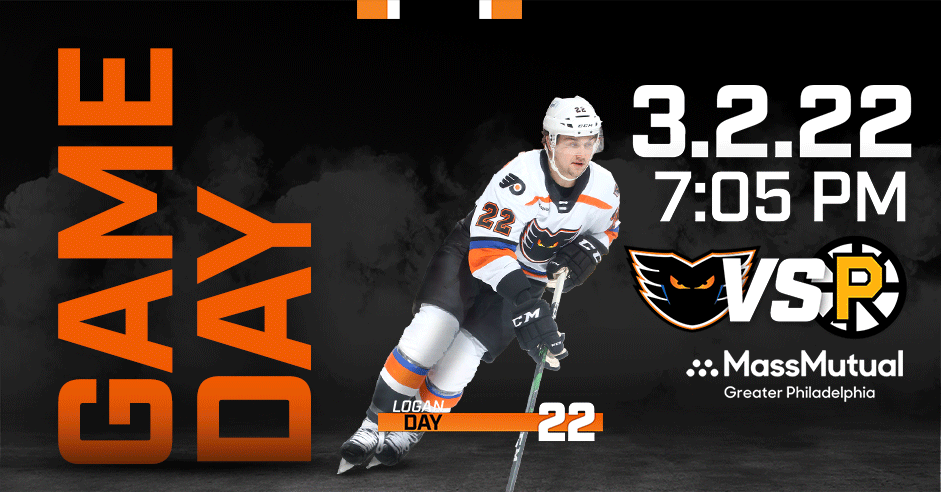 TONIGHT
It’s a GAMEDAY presented by MassMutual. The Lehigh Valley Phantoms host the Providence Bruins in the midweek clash to open a three-game homestand.
Lehigh Valley (18-20-10) is chasing Wilkes-Barre/Scranton for the final playoff spot in the Atlantic Division while also holding two games in hand. Providence (24-14-6) is in second place in the Atlantic Division with wins in five of its last six. This is game 49 of the season for the Phantoms. There are 28 games remaining including tonight.

LAST GAME
Pat Nagle (7-1-3) returned to the Phantoms with 35 saves on 37 shots but did not receive enough offensive support in taking his first regulation loss of the season in a 2-1 setback at Cleveland on Saturday afternoon. Wyatte Wylie scored the lone goal for the Phantoms on a point-shot that almost appeared as though it had been tipped by Hayden Hodgson.

NAGLE IS BACK
Pat Nagle has returned from his trip to China with the USA Oympics Team. His last game before departing for the Olympics resulted in his first career AHL shutout with a 26-save gem on January 29 in a 4-0 win at Hartford.
Nagle has thrived in his opportunity with the Phantoms going 7-1-3. The 34-year-old veteran goalie has 198 career wins in the ECHL to rate sixth all-time and first among active ECHL goalies. Tonight will be Nagle’s first home games for the Phantoms since a December 21 victory against the Hershey Bears.

USTI TIME!
Kirill Ustimenko picked up his first AHL win of the season and also his first in a little over two years with his 30-save gem last Wednesday in a 3-2 shootout win at Wilkes-Barre/Scranton. “Usti” also had his first AHL win at Wilkes-Barre/Scranton in February, 2020 when he racked up 38 saves for the Phantoms in a 5-3 victory at the Penguins.
Ustimenko entered in relief of Felix Sandstrom on Saturday night and has played in four consecutive games since his return to the Lehigh Valley roster going 1-1-2, 1.80, .933 with 97 saves on 104 shots.

PROVIDENCE BRUINS
Lehigh Valley is 1-1-0 against against the Bruins. Lehigh Valley won the most recent encounter on February 5 in a 5-1 blowout with Hayden Hodgson scoring a pair of goals. Zach Senyshyn leads the P-Bruins with 14 goals and had a hat trick against the Phantoms in November.
Veteran goalie Troy Grosenick (13-3-1) is third in the AHL in GAA (2.16) and save percentage (.924).  Since February 11, Grosenick has gone 5-0-0, 1.26, .958 with just six goals allowed on 144 shots. He had a 34-save shutout against Hershey on February 18 within his current hot stretch.

News and Notes
– Tonight is Cal O’Reilly’s 799th game in the American Hockey League. He is on his way to becoming the 41st player to play in 800 career games in the AHL.
– Lehigh Valley went 1-1-1 on its recent three-game road-trip.
– Lehigh Valley has gone 15-9-5 in its last 29 games after a beginning that saw just three wins in the first 19 games at 3-11-5.
– KILLING IT! The Phantoms’ penalty kill rates fifth in the AHL and is tied for first in the conference at 83.9% (Providence is also 83.9%).
The Phantoms are at an even stronger 87.5% (70/80) in their last 26 games since December 18
– The Phantoms have played 48 games and have 28 remaining with less than two months to go in the 2021-22 regular season.
– Hayden Hodgson leads the Phantoms with 15 goals and has three goals in the last six games as well as 9 goals in the last 17 games.
– The Phantoms are tied for the second-most overtime games in the AHL with 14. The Phantoms have gone to overtime in three of their last five games.