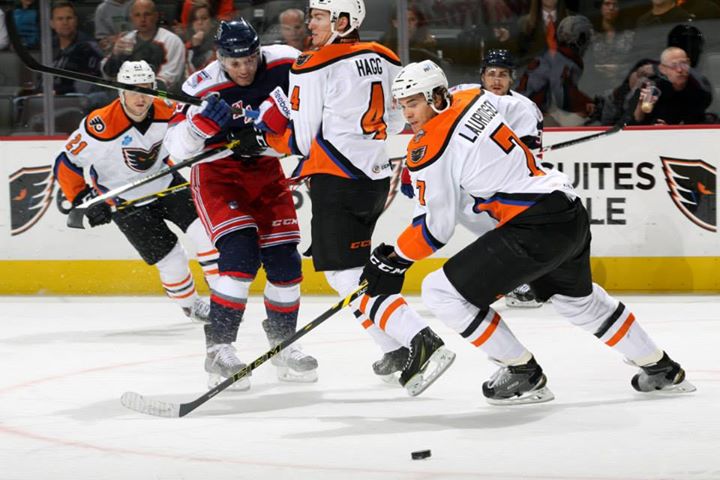 Hartford, CT – The Lehigh Valley Phantoms extended their streak to five consecutive games with a standings point via a 2-1 overtime loss at the Hartford Wolf Pack on Saturday evening. Lehigh Valley has gone 3-0-2 in their last five games to improve their overall record to 13-10-5. The Phantoms played their ninth overtime game of the season which is second-most in the Eastern Conference only to St. John’s total of 10 extra-session contests.

Zack Stortini scored his fourth of the season as well as his third goal of the past nine days to stake the Phantoms to a 1-0 lead in the closing minute of the first period. Nick Cousins and Taylor Leier assisted on the Stortini strike.

But Hartford finally converted to tie the score midway through the second period on a goal by Chad Nehring. That was the first goal allowed by Anthony Stolarz on the weekend following his 32-save shutout of Hershey the night before.

Later it would be 35-year-old NHL veteran Ryan Malone barely scoring the winner in overtime during the 3-on-3 session.

Malone nudged the winning tally barely across the goal-line banking off the leg of Phantoms defenseman Mark Alt who had initially swept the puck away from the line before it again would bounce of his own leg and back in by about an inch. Alt had earlier saved the day in the third period with a terrific block of a Ryan Bourque drive on the backdoor with a wide-open goal-mouth awaiting.

Shortly before Malone’s game-winner, Darroll Powe almost converted the overtime tally for Lehigh Valley’s behalf against his former team but he was denied on the breakaway on the glove of cedric Desjardins. Powe played for Hartford the last two seasons.

The final game for the Phantoms before the Holiday Break commences the beginning of the league-mandated layoff in which no practices or games will be held. Many of the players and coaches will be heading home for the holidays for a few days to spend time with family and friends.

Shots in the game were even at 26-26. The Phantoms went 0-for-3 on the power play while Hartford finished 0-for-4.

Lehigh Valley returns from the Holiday Break on Friday night with an away game at Giant Center against the Hershey Bears.

The Phantoms last home game of 2014 is Saturday night against the Hartford Wolf Pack on Player Photo Night. Fans will be allowed to walk down to the ice after the game to take their own pictures with their favorite Phantoms players. Saturday’s game will mark Lehigh Valley’s last home contest for almost three weeks. The Phantoms don’t return home again until January 16 and 17 with back-to-back weekend games including Legends Night with Bobby Clarke in attendance for the Saturday, January 17 tilt.

Order tickets in advance at PPLCenter.com or 610-347-TIXX (8499) or the Mealey’s Furniture Box Office inside PPL Center.