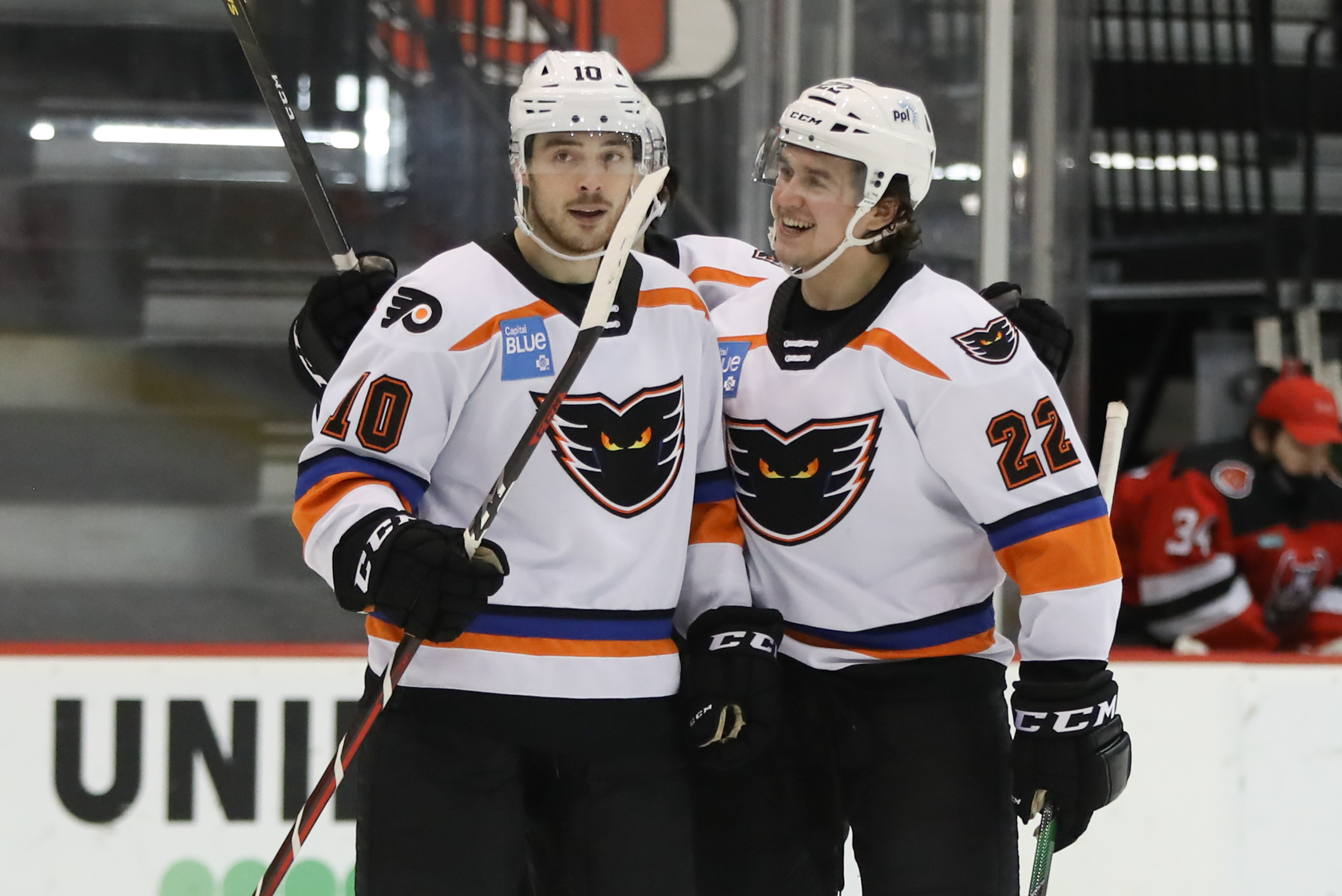 Lyon Strong in Net With 33 Saves at Devils

March 26, 2021
Newark, NJ – Tanner Laczynski dazzled with an incredible between-the-legs goal on a shorthanded breakaway to break a 2-2 tie in the third period not only completing a hat trick but also registering an amazing “Goal of the Year” candidate. It was a wild way to win Friday’s game 3-2 at the Binghamton Devils in Newark. Alex Lyon turned in a sterling 33-save performance in the comeback win as well.

Lehigh Valley (9-3-2) rallied in the third period again as Laczynski registered an even-strength goal in the second period following by a power-play goal to tie it in the third and then his unbelievable, shorthanded goal with 11 minutes left to put the Phantoms in front.

With the game tied at 2-2, Zayde Wisdom was assessed an instigation penalty and a game misconduct which also resulted in a five-minute major power play for the Devils for a golden chance to take the lead. But Laczynski turned the tables on that when the puck was poked forward to him and he jumped on his breakaway opportunity.

He deked to the backhand and then outrageously pulled the puck back between his legs before flipping a little right-handed forehand past the glove of Gilles Senn for the remarkable goal.

Pascal Laberge had scored the team’s last hattie on March 27, 2019 in a 3-2 overtime win at Rochester.

After killing the five-minute major, the Phantoms got a power play of their own and a chance to take the lead. But former Phantoms forward Danick Martel had a shorthanded breakaway of his own with under five minutes left and an opportunity to tie. Alex Lyon slid over to his left to make a dazzling left-pad save on his ex-teammate, Martel, and preserve the 3-2 advantage.

Binghamton also had a power play with 2:30 left and ultimately pulled their goalie for a 6-on-4 advantage but the top penalty kill in the American Hockey League steadily worked through the disadvantage yet again.

Binghamton had taken a 1-0 lead in the first period on a goal for Brett Seney from behind the net. He followed the rebound of his shot that was denied on a strong save by Lyon and the quick put-back caromed in off the Phantoms goalie for the early tally.

Laczynski tied the game in the second period with a wrister from the top of the right circle that went through Senn. But Nikia Ohtotiuk’s backdoor rebound tap-in just a couple minutes later put the Devils in front again.

That’s when Laczynski stole the show in the third with his tying tally on the power play in the early minutes and then his shorthanded winner at about the midway point.

Meanwhile, Lyon was turning aside one quality chance for the Devils after another as he very much looked like vintage Alex Lyon again while seemingly having found his game-form after spending most of this season on the Flyers taxi squad.

Laczynski had scored the first two goals of his pro career just this past Sunday in a comeback, overtime win against the Penguins. His first pro goal tied the game in the third period and then he went on to score the winner in overtime. All five of his goals scored this week have either tied the game or given the Phantoms the lead and/or victory.

The Phantoms and Devils rematch on Saturday night at PPL Center to open a three-game homestand which includes contests on Wednesday, March 31 against Hershey and Saturday, April 3 against Wilkes-Barre/Scranton.
Tickets for all Phantoms home games are available and on sale to the general public at PhantomsHockey.com and PPLCenter.com