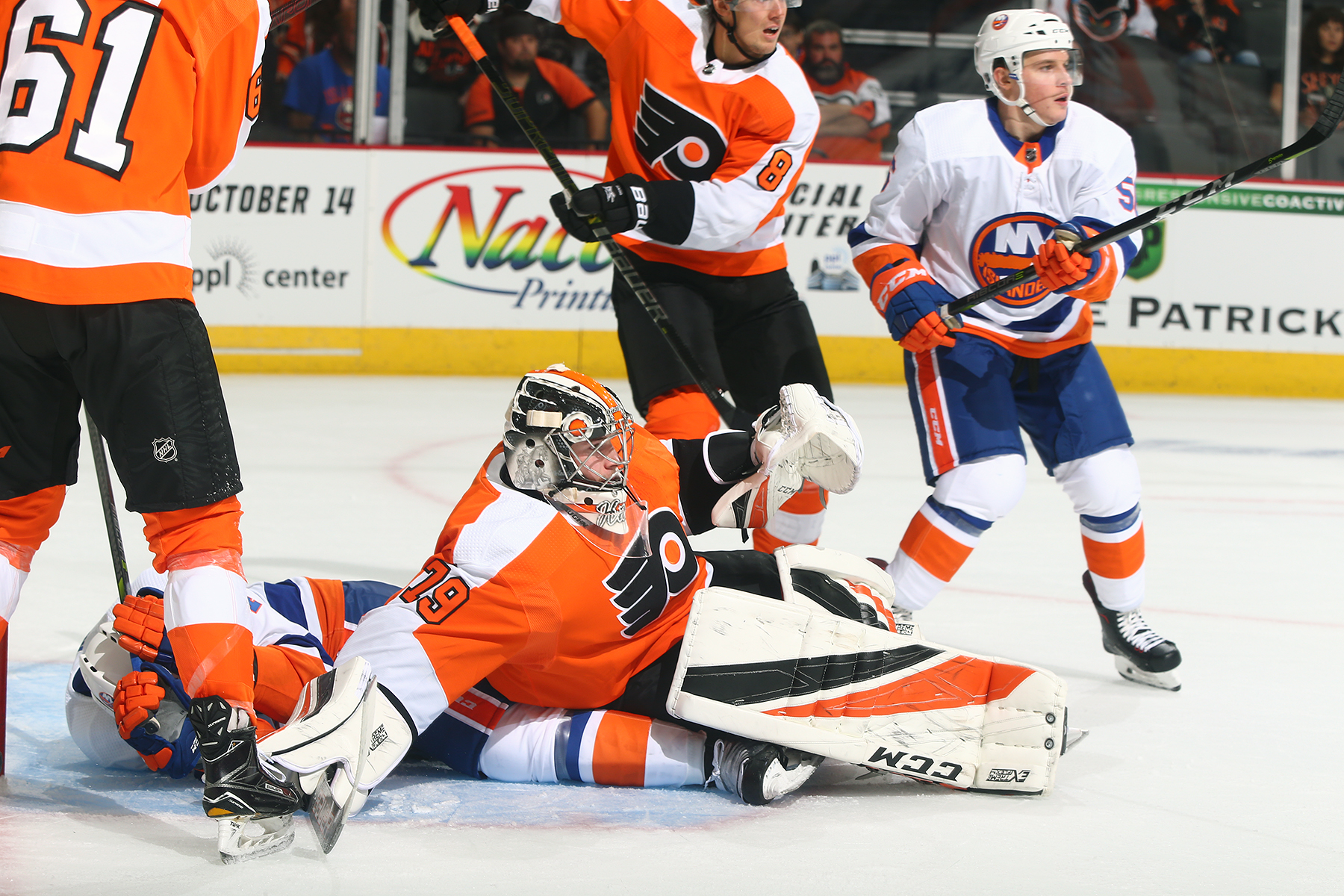 Lehigh Valley, Pa. – The beginning of hockey season arrived to downtown Allentown yet again in the form of another exciting Flyers in the Valley showcase event at PPL Center. An enthusiastic, Friday night crowd of 7,110 fans converged at the corner of Seventh and Hamilton to see goals from Shayne Gostisbehere and Travis Konecny for Philadelphia while the visiting New York Islanders eventually emerged victorious in a 3-2 overtime decision. Ryan Pulock’s overtime blast from the left circle over the right shoulder of Anthony Stolarz culminated the entertaining evening.

The result was the first time the Flyers had not won in Allentown as their overall record moved to 3-0-1 at PPL Center. The Islanders successfully avenged last year’s 3-2 overtime result in the Flyers in the Valley game from 2017 that was capped by Gostisbehere’s thrilling overtime winner. 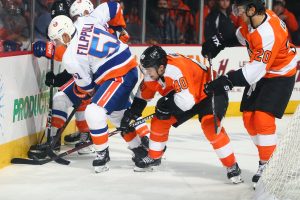 Fans in the Lehigh Valley region have enjoyed the only AHL market to host an NHL preseason game in each of the past four seasons. Only three AHL teams are hosting NHL preseason events this year: Lehigh Valley, Bridgeport and Iowa. It is a special opportunity to witness some of the NHL’s best and brightest stars that is not afforded to the majority of AHL fan-bases. What is a rarity for most in the league has become a regular tradition for the fans in Allentown and a tremendous way to officially welcome the return of hockey season.

The 2018 edition of Flyers in the Valley featured several star players such as Gostisehere, James van Riemsdyk and Jake Voracek, who were continuing their efforts to solidify their games for the upcoming regular season while other young talents remain in the thick of heated roster battles. The Islanders arrived with reigning Calder Trophy winner Mathew Barzal, veteran forward Josh Bailey, and a host of other noteworthy skaters.

Carsen Twarynski is one player who stood out in Friday’s game with his hard-nosed and mostly straight-forward play. The rookie forward from the Kelowna Rockets had one of the stronger performances on the evening for Philadelphia. And fellow rookie Misha Vorobyev notched an assist on Konecny’s second-period strike as he continued his push for a Flyers roster spot. On the blue-line, Philippe Myers and Mark Friedman stood out as recent Phantoms rookies who are still engaged in the Flyers training-camp competition.

The most highly hyped of the young Flyers is undoubtedly goaltender Carter Hart. The two-time CHL Goalie of the Year saw game competition at PPL Center for his first time ever and he performed capably in his 30 minutes of game-time turning aside all nine shots that he faced including a couple of big blasts in a long 5-on-3 opportunity for the Islanders at the opening of the second period.

Anthony Stolarz stepped in the rest of the way in his comeback efforts from a mostly lost season when he was sidelined with knee-surgery rehab for the bulk of the 2017-18 campaign. 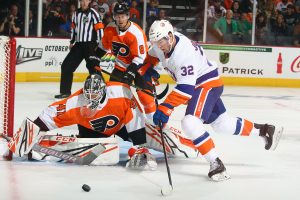 Philadelphia opened the scoring at 8:30 into the first period on a center-point power-play blast from Gostisbehere off the right post past the glove hand of Isles goaltender Robin Lehner. The lamplighter was reminiscent of Ghost’s first career professional goal scored from almost exactly the same spot on the ice on October 28, 2015 on a power-play blast against Dustin Tokarski of the St. John’s IceCaps that was on the left-post and blocker side.

The Flyers controlled the play in the first period with an 11-4 shots advantage that also saw five combined penalties including two against the Flyers which they successfully killed.

New York bounced back in the second and Barry Trotz’s skaters started to generate better opportunities at Hart. When Robert Hagg and Jori Lehtera were assesed consecutive penalties just three seconds apart the Flyers found their backs to the wall with almost two full minutes of 5-on-3 hockey for the Islanders. But Hart made a couple of big saves and the three-man penalty-kill contingent successfully scrapped their way through the disadvantage to preserve the 1-0 lead.

The Islanders eventually transitioned into the zone at 16:09 into the second-period with 28-year-old rookie newcomer Jan Kovar converting past the pad of Stolarz after a nifty give by Adam Pelech.

The 1-1 tie would be short-lived as the Flyers took less than 90 seconds to offer a rapid response. Mark Friedman’s outlet from the defensive zone connected with Vorobyev up the left wing who quickly spotted Konecny busting across the line. The talented youngster found the puck in his right hand, dropped the biscuit to his stick, and then smartly scored on a backhand play past the right pad of Lehner for a highlight-reel caliber goal to put the Flyers back up 2-1 entering the second intermission. 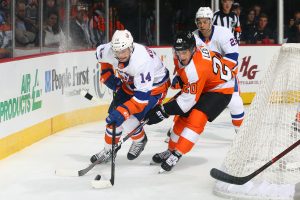 Philadelphia had a power play to open the third period but were unable to convert. Ross Johnston emerged from the penalty box just as the Islanders were regaining momentum and he found a bouncing puck on his stick for a backdoor goal from the low-left slot just 2:16 into the third period for another tie game.

The Flyers would find themselves with back-to-back man advantages in the third period with some solid chances to retake the lead but Philadelphia was unable to beat Lehner. Former Philadelphia Phantom and Calder Cup winner Dennis Seidenberg had committed the two penalties.

Then it was the Islanders’ turn for some more power play chances. Michael Raffl’s slash at 16:54 into the final frame was successfully killed partly due to a couple of timely clears by Radko Gudas.

Sebastian Aho rushed up the backdoor after a cross-ice pass by Mathew Barzal and with less than a minute to go, a committed Stolarz who rotated far to his left was charged with a tripping penalty when he contacted the dangerous Islanders defenseman.

Philadelphia killed of the third-period portion of the power play. But 60 seconds into the overtime it was Pulock’s rocket from the left dot that propelled the Islanders to victory on their only lead of the night with a 4-on-3 conversion that was assisted by Barzal and Nick Leddy. 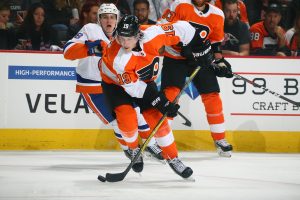 Philadelphia out shot the Islanders 29-17. Both teams finished 1-for-6 on the power play.

The Flyers are expected to make some more cuts in the next couple days to continue to fill out the Phantoms roster. Philadelphia continues preseason play on Monday night against the Boston Bruins.

The Lehigh Valley Phantoms open their own training camp this weekend and will play a trio of preseason games next week. The Phantoms are at Wilkes-Barre/Scranton on Thursday, September 27 and then will host the Charlotte Checkers on Friday, September 28 and Saturday, September 29.