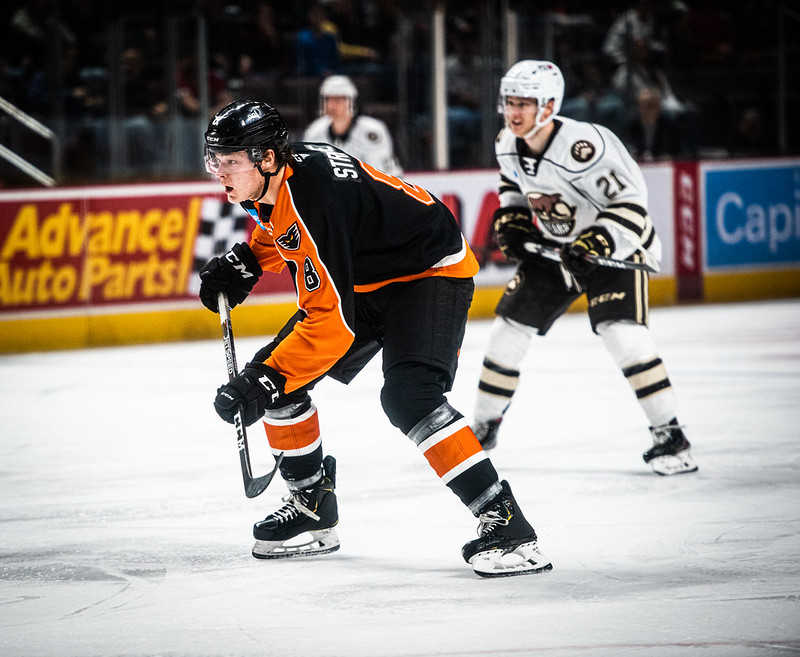 Hershey, Pa. – The Lehigh Valley Phantoms poured in 32 shots in Saturday’s goaltenders’ battle but Vitek Vanecek and the Hershey Bears held on for a nail-biting win in a 1-0 decision on Saturday night. J-F Berube turned aside 19 of 20 offerings from the Bears but Mike Sgarbossa’s power-play tally late in the second period proved to be the difference.

Phantoms second-year winger David Kase had four different chances right on top of Vanecek but the Hershey net-minder was on top of it every time. With 1:00 remaining, Matt Strome from the right of the cage had a chance to put home the tying goal and appeared to have briefly thought that he had done so but somehow Vanecek stopped that one as well. Greg Carey had several monster shots as well while T.J. Brennan, Andy Welinski and Tyler Wotherspoon all cranked up big chances from the blue-line. Reece Willcox had a nice dangle around a defender to set up yet another scoring try in the second period but despite the continued pressure and solid play, the Phantoms simply were unable to break through. 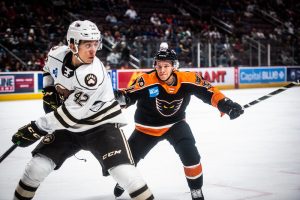 The physical and hard game saw a handful of scraps and collisions between the heated rivals. Hershey tough guy Kale Kessy delivered a hard hit on Cal O’Reilly in the second period that sent the Phantoms co-captain out of the game with injury. Greg Carey stepped in to challenge Kessy at that point. And Kessy later would drop the gloves with Phantoms heavyweight Kurtis Gabriel in the second fight of the season between the two.

Mike Sgarbossa broke a scoreless tie late in the second period with his snipe from above the left dot to the upper, far corner past the glove of Berube for the only goal of the game.

It was the second time this season for Lehigh Valley to be held off the scoreboard and the first time since sustaining a shutout in the team’s season opener on October 5 against Providence. 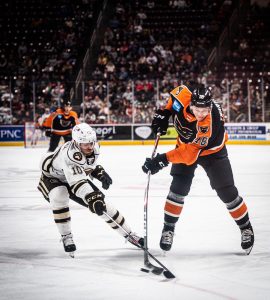 Exactly one year ago was a Phantoms 1-0 win against Hershey when Carter Hart racked up 26 saves in his first pro shutout on December 7, 2018. The Adirondack Phantoms also had a 1-0 win against Hershey on January 3, 2013 on a perfect night for Cal Heeter.
The Phantoms return to action on Friday night at the Hartford Wolf Pack and then will be back at PPL Center on Saturday for a rematch against Hartford on the team’s annual Teddy Bear Tos Night to benefit area kids through Valley Youth House.