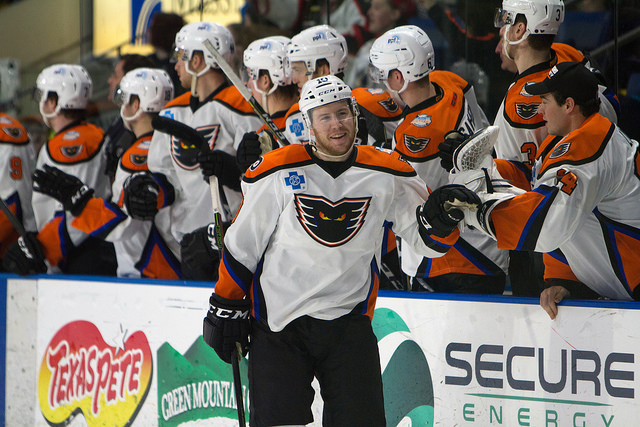 Springfield, Mass. – Down but not out with 6:00 remaining and trailing 3-1, a determined Lehigh Valley Phantoms team continually knocked on the door in a frantic third-period effort and eventually busted it down with three rapid-fire goals for a dramatic 4-3 victory at the Springfield Thunderbirds on Monday afternoon.

The scorching hot shooting of Greg Carey helped push the Phantoms over the top with his second consecutive multi-goal game as the third-year winger from Hamilton, Ont. moved into a tie for the AHL lead at 21 goals with Wilkes-Barre’s Jake Guentzel. Both of Carey’s Monday strikes were on the power play and he leads the AHL in that department as well with 13 man-advantage conversions. 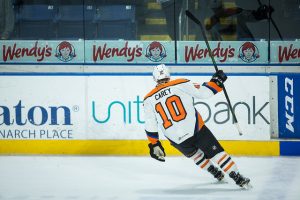 Carey has blasted home 11 goals in the last 14 games to rocket back up to the top of the league lamplighter leadership. Carey starred for the former Springfield Falcons one season ago leading their team with 26 goals. This was Carey’s first game back at MassMutual Center since donning the sweater of the team that previously represented Western Massachusetts and he celebrated his homecoming with a #1 Star of the Game curtain call for the fans who used to cheer for him.

Andy Miele (4th) provided the game-winning goal with just 1:38 remaining on a picture-perfect blind, backhand drop by Chris Conner from behind the goal that induced T-Birds netminder Reto Berra to turn the wrong way. He was still peering over his left shoulder trying to find the puck when Miele dropped it in past his right hip. Conner pulled out his favorite move at just the right time to strike the dagger into the hearts of the Springfield squad.

Scott Laughton (6th) had a mid-slot tip and redirection of a Robert Hagg left-point slapper with 5:31 remaining to pull the Phantoms to within 3-2. The critical goal was Laughton’s third conversion in the last five games.

Then just 27 seconds later and with 5:04 to go it was the power-play bomb by Carey that would even the score at 3-3. It was a tripping penalty by former Adirondack Phantom Shane Harper upending Jordan Weal just four seconds earlier that provided his ex-team with the pivotal man-advantage opportunity. Carey’s drive from the top of the right circle came after a quick dish across by T.J. Brennan immediately following a faceoff win by Jordan Weal. 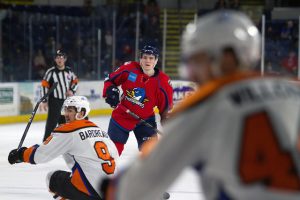 With momentum having shifted securely to the side of the visitors it seemed just a matter of time for the Phantoms to strike again with the game-winner and the Conner to Miele connection with under 90 seconds remaining proved that feeling correct.

Anthony Stolarz secured his second consecutive victory with 25 saves but initially that did not appear to be the likely result. Springfield raced out to a 2-0 lead in the first 6:03 on a pair of power-play scores for the hosts by Matt MacKenzie and Sen Acolatse. The Phantoms had a flat start to begin the day and found themselves trailing on the road 2-0. 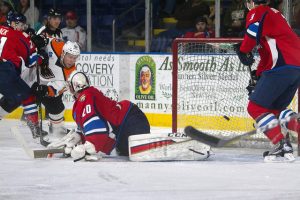 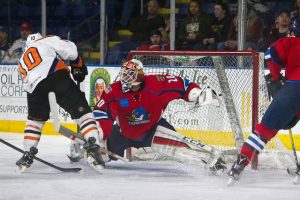 Greg Carey scored the first of his power-play markers in the opening minutes of the second period on a little give-and-go up the right-wing boards with Chris Conner. His initial offering while cutting across the crease was kicked down by Reto Berra but Carey stayed with it while being shoved away from the slot and was able to flip the loose rebound over Berra’s right leg putting the Phantoms on the board at 2:58 into the second period.

Springfield regained momentum, as well as their two-goal margin, just 40 seconds later on a quickly developing odd-man rush sparked by a stretch pass from defenseman McKenzie Weegar. Kyle Rau settled the pass across from Acolatse and shot around defending Robert Hagg and under the glove of Stolarz for a 3-1 lead.

The Phantoms had a difficult time establishing momentum in the second period. Springfield out shot the visitors 15-9 in the frame and had the Phantoms trying to dig the puck away from the boards in their own zone for longer stretches as the game was grinding along. 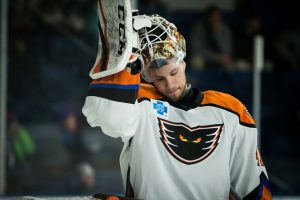 With three goals in the final six minutes, the Phantoms are now outscoring their opponents 55-27 in the third period for a whopping +28 margin. That is the most goals of any AHL team for any period and is also the largest positive scoring margin for any team during any period. Lehigh Valley remains the highest scoring team in the AHL at almost 3.7 goals per game.

Lehigh Valley improved to 25-10-2 and gained ground on the Wilkes-Barre/Scranton Penguins who dropped their Monday afternoon contest at Syracuse. The Phantoms and Penguins will meet in a rivalry showdown engagement of the top two teams in the American Hockey League on Friday night at PPL Center.

The Phantoms overcame a two-goal deficit in the third period for third time this season and victimized the Thunderbirds on a second consecutive meeting. Lehigh Valley trailed Springfield 4-2 in their last encounter on November 5 at PPL Center but Greg Carey again sparked a comeback that also saw third-period goals from Taylor Leier, Colin McDonald and Chris Conner in the 6-4 victory.

Carey also provided a two-goal comeback in the third on November 18th at Providence when he struck twice on the power play in the last 8:00 of regulation to force overtime before Scott Laughton’s game winner.

The game also marked the second consecutive Springfield sojourn for the Phantoms to overcome a two-goal deficit in the third. The team’s most recent visit to MassMutual Center was February 21 of last year was against the old Springfield Falcons and saw Lehigh Valley rally from a 4-2 hole in the third on goals by Adam Comrie and Phil DeSmione before the buzzer-beating rising rocket by Mark Alt from the point with just 2.7 seconds remaining.

The Phantoms return to PPL Center for their Pre-All-Star Game Celebration on Friday and Saturday nights against the Wilkes-Barre/Scranton Penguins and Providence Bruins. Saturday’s game is Youth Jersey Night for the first 2,500 kids age 14 and younger. Tickets are available at PPLCenter.com